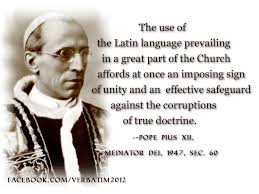 Whenever the census in Canada rolls round, I suspect that I am one of the few people who, in the box where one reports languages spoken in the home, must honestly write Latin. Since the birth of my first of four sons seven years ago, I have spoken almost entirely in Latin to them. Why? Not because I am passing on a family tradition. I grew up speaking English.

I began learning Latin when I was seventeen. That year I entered a seminary, but Latin was not spoken there. Thinking I was going to a seminary where Latin would be taught excited me until I was told that reading and speaking it were two different things.

Having heard another call, I married the love of my life. When we were expecting our first child, I began to think seriously about my paternal duties—it is not enough to bring a child into this great world and then, like Alfred P. Doolittle, “leave ’er alone to enjoy it.” As we all know, a child must be given a loving education. One thing I learned in the seminary was an understanding of the historical life of the Church; that the Church has experienced periods of flourishing and years of decline. There have been recurrent dark periods, where Church morals and discipline sank to hellish levels—ours is not the first age of scandal. Frequently, the causes of these declines were the demise of Catholic education.

For example, after the Black Plague (1346–1353), which killed half of Christendom’s clergy, bishops were eager to get men back into the sanctuary. Priests were ordained—often without priestly training, or a solid grounding in Latin and Theology. Many of these priests had a lax attitude to a liturgy they could not understand, coupled with moral indifference.

The period preceding Vatican Council II shows some similarities in the decline of Latin and Theology. John Senior, in his The Restoration of Christian Culture, notes:

“To compensate for our [educational] failures, seminaries in the decades preceding Vatican II tabulated maxims based upon the Summa as texts for easily testable courses … In the great Catholic universities at Rome and elsewhere, the grand old Dominican and Jesuit masters went on lecturing in Latin to students, many from America, who had to get laugh-signals from the graduate assistants when the master cracked a joke because no one knew Latin well enough to tell a joke from a scholastic formula.”1

In light of history, it becomes obvious that poor Latin equals poor theology, since the very words and texts of theology and even of prayer were Latin. But what about now, when seminary education is offered in vernacular languages? Current Canon Law stipulates (§249) that seminarians must know their Latin: “sed etiam linguam latinam bene calleant” (but they must understand Latin well). What does “well” mean? The Vatican II decree Optatam Totius explains:

13. Moreover [seminarians] are to acquire a knowledge of Latin which will enable them to understand and make use of the sources of so many sciences and of the documents of the Church. The study of the liturgical language proper to each rite should be considered necessary.

So why do I teach my children Latin? First, I want to equip them for a divine vocation, should God come a’knocking. Second, I want them to have the freedom, even as laymen, to approach 2000 years of Latin scholarship in Catholic thought, history, philosophy, theology, prayer, and mysticism with ease and delight. Ultimately I wish to arm them to follow Christ and thus lead the necessary restoration of Catholic Culture. John XXIII, in his Apostolic Constitution Veterum Sapientia, said:

10. … It is a matter of regret that so many people, unaccountably dazzled by the marvelous progress of science, are taking it upon themselves to oust or restrict the study of Latin and other kindred subjects…. Yet, in spite of the urgent need for science, our own view is that the very contrary policy should be followed. The greatest impression is made on the mind by those things which correspond more closely to man’s nature and dignity. And therefore the greatest zeal should be shown in the acquisition of whatever educates and ennobles the mind. Otherwise poor mortal creatures may well become like the machines they build—cold, hard, and devoid of love.

According to the thought of John XXIII, in teaching my children Latin I am teaching them a language of love.