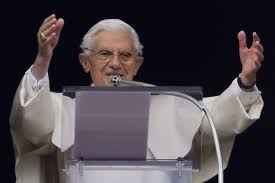 From the crisis of today the Church of tomorrow will emerge—a Church that has lost much. She will become small and will have to start afresh more or less from the beginning. She will no longer be able to inhabit many of the edifices she built in prosperity. As the number of her adherents diminishes, so will she lose many of her social privileges. In contrast to an earlier age, she will be seen much more as a voluntary society, entered only by free decision. As a small society, she will make much bigger demands on the initiative of her individual members. Undoubtedly she will discover new forms of ministry and will ordain to the priesthood approved Christians who pursue some profession. In many smaller congregations or in self-contained social groups, pastoral care will normally be provided in this fashion. Alongside this, the full-time ministry of the priesthood will be indispensable as formerly.

The Church will be a more spiritualized Church, not presuming upon a political mantle, flirting as little with the Left as with the Right. It will be hard going for the Church, for the process of crystallization and clarification will cost her much valuable energy. It will make her poor and cause her to become the Church of the meek. The process will be all the more arduous, for sectarian narrow-mindedness as well as pompous self-will will have to be shed. … But when the trial of this sifting is past, a great power will flow from a more spiritualized and simplified Church. Men in a totally planned world will find themselves unspeakably lonely. If they have completely lost sight of God, they will feel the whole horror of their poverty. Then they will discover the little flock of believers as something wholly new. They will discover it as a hope that is meant for them, an answer for which they have always been searching in secret.

And so it seems certain to me that the Church is facing very hard times. The real crisis has scarcely begun. We will have to count on terrific upheavals. But I am equally certain about what will remain at the end: not the Church of the political cult, which is dead already, but the Church of faith. She may well no longer be the dominant social power to the extent that she was until recently; but she will enjoy a fresh blossoming and be seen as man’s home, where he will find life and hope beyond death.