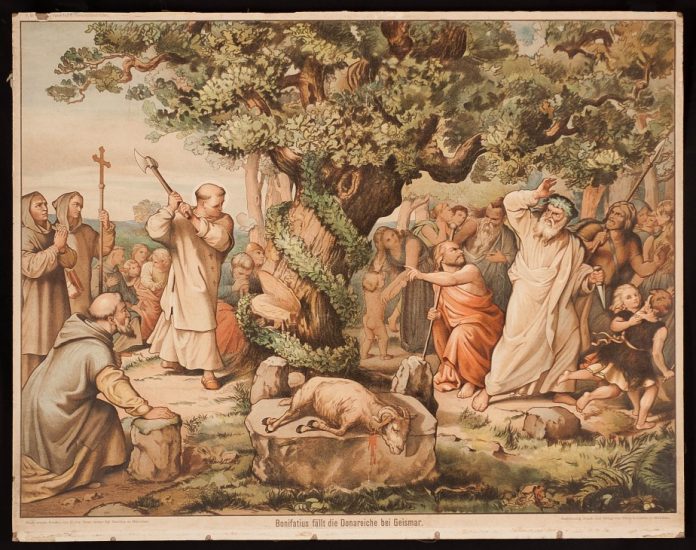 Saint Boniface, bishop and martyr, was martyred by a pagan band on this  day, June 5, 754. His life was one of tireless struggle to convert the Frisians, early inhabitants of Germania, steeped in paganism and idolatry.  The famous story of his felling of the Donar Oak, which the pagan Frisians held so sacred that any man who harmed the tree would himself die, has become a symbol of Christianity’s dominance over idolatry.  Of course, pagans could respond that there is no strict correspondence between violations of the supernatural order and effects in the natural earthly sphere.  After all, many modern day pagans, heretics, apostates and even plain old sinners, amongst which latter group I most firmly place myself, commit all sorts of outrages against God everyday, yet go about their business as though nothing was awry. We will only see the full justice of God at the end of time, when all history, and all the choices of each and every individual man, are fulfilled.

More to the point, Boniface is hailed as a hero of sanctity, dedicating himself to the cause of Truth, and leading others thereto, regardless of the difficulties and labours.  A friend this morning mentioned that Boniface’s first mission to the pagans was overall unsuccessful, and it was only after he had received a specific mandate from the Holy Father, along with the name of ‘Boniface’, that his efforts turned the tide of Germania towards Christianity, culminating in shedding his blood (and now Germany stands well in need a good dose of re-conversion).  Our work for God must always be done under obedience of some sort, manifesting the voluntas Dei through properly constituted authority.

This is not easy, for authority mediated by fallible human creatures can be, and often is, wrong, or at least imperfect.  But in the end God brings great good from the submission of our intellect and will, what the Dogmatic Constitution on the Church, Lumen Gentium, terms the obsequio animi, the assent of our minds.  It is only so that we can in the end, in the big picture, with Saint Boniface, as his name implies, fulfill the true ‘good’ that God desires for us and for all.

Speaking of the good, we are back now to the infelicitously named ‘ordinary time’, which is not really ordinary but, as Father de Souza has pointed out, refers to the fact that we count the days by ‘ordinal’ numbers, Feria Secunda, Tertia, Quarta and so on.  But ordinary in English is, well, just plain ordinary.

In the usus antiquior, there is an octave of celebration after Pentecost, only fitting for the second highest feast in the Church’s calendar.  The other two, Christmas and Easter, still have their eight days, so why not Pentecost?  There is an anecdote told of Blessed Pope Paul VI, that he only realized the full extent of the ‘changes’ he had authorized in the Liturgy when, the day after Pentecost, the sacristan laid out green vestments.  The Pope supposedly wept.  That may be an exaggeration, but the point is made. So in your own way, continue the spirit of Pentecost for a little longer; pray to the Holy Spirit, live and move by His inspirations, and continue this spirit well through the long summer days, all that ‘ordinary’ time, which we can and should make anything but ordinary.