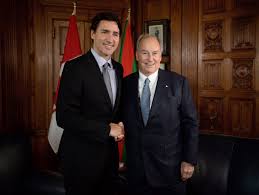 One can only hope that Justin Trudeau’s sense of entitlement and noblesse is finally catching up to him.  Even the secular media, who have placed their halo around his hallowed locks, are in consternation at his bizarre New Year’s holiday on the private island of Agha Khan, whose full name and title are Prince Shah Karim Al Hussaini, the 49th and current Imam of Nizari Islamism, which accounts for about 20% of the world’s Shia Muslims, in the minority compared to the far more numerous Sunni Muslims, each derived from different descendants of the ‘prophet’ Muhammad.

Imam Khan, as Trudeau has admitted, is a lifelong friend of his family, and was a pallbearer at his father’s funeral. Our ingenu Prime Minister seems unaware, or at least unrepentant, that he broke various serious ethical guidelines.  It turns out that Mr. Khan (?) receives millions of dollars from Canada for his philanthropic work; well, make that more than millions, to the tune of three hundred million of taxpayer dollars to carry out whatever ‘charitable’ work Khan deems fitting, many of which seem to involve helping other Naziri Ismailis.  That, by the way, is millions we Canadians do not have, mired in a debt load over 636 billion and counting rapidly.  Then again, what are we to expect from Mr. Trudeau, Jr., who  has admitted, again all wide-eyed smiles and Bambi-like, that deficits and budgets just ‘balance themselves’; this from the entitled scion of a multi-millionaire, who has likely never had to balance a budget in his life.

Here is the rub: Politicians, rich or not, are not permitted to receive favours from lobbyists, especially those seeking money from the government, for obvious conflict-of-interest reasons. No one should have privileged access to leaders in any just democratic system.  Then again, to paraphrase Churchill, a just democracy has never really existed.  That said, in the imperfect system we have, we must do the best we can.

The main offence, besides carting his whole family down to the Bahamas to party and vacation with Mr. Khan and his hangers-on, was to accept a 150km ride from Nassau to the Imam Khan’s island on the Khan’s private helicopter. That, apparently, is explicitly illegal under federal law, for a Prime Minister to accept such a private ferrying from a lobbyist, unless it has been explicitly vetted a priori by the ethics commissioner.

The whole thing is odd and bizarre, for we might add that the Prime Minister also skipped the celebrations on Parliament Hill to kick off Canada’s 150th anniversary, a fete that cost the taxpayer over $2 million, including those who were standing in the freezing rain in Ottawa while the Trudeaus were frolicking in Khan’s sun and sand paradise.  There is also the distaste we might feel that the Trudeau’s were accompanied by the troubled former talk-show-news host Seamus O’Regan, now a Liberal M.P. and his, ahem, ‘husband’.

Now Trudeau is trying to make things right with a cross-country tour, taking questions in town halls, and appearing in the ubiquitous Tim Hortons that dot all over this fair land. No one seems to be asking him anything in the way of hard questions, and one wonders whether this is all a pre-vetted show. He has admitted that he is a ‘feminist’ and that Muslim immigration is nothing but a ‘strength’ for Canada, and that he promises to stand up on these issues to President Trump, whose inauguration he is skipping.

Here is the thing about the conscience of Trudeau, and anyone else’s for that matter:  It is either integral and whole, or it is not.  If we deliberately and knowingly do something we know to be wrong, there is not much stopping us doing other things that are wrong, until we start thinking that what was wrong was not all that wrong, and even kind of right.

We should ponder the words of Saint Thomas More in Robert Bolt’s great play, to those who urged him just to sign the document declaring King Henry ‘Head of the Church of England’:

When a man takes an oath, he’s holding his own self in his own hands like water, and if he opens his fingers then, he needn’t hope to find himself again.

More’s words apply to any case wherein we forsake our conscience (as we see in the book and now-film Silence).

For as More states elsewhere:

I think that when statesmen forsake their own private conscience for the sake of their public duties, they lead their country by a short route to chaos.

I know not the interior conscience of Mr. Trudeau, where is ‘alone with his God’, but, in any objective sense, he could do with a lot of further formation in that domain.  His untrammelled support for the wholesale murder of the unborn by abortion, and now of the sick, elderly and depressed by euthanasia-murder-suicide, signify something deeply and disturbingly unethical about him, and the current episode with the Agha Khan is all of a piece.  We can only hope for his sake that he ‘knows not what he does’.  But we must also expect that when the truth is pointed out to him, and realizes it so, he alters his behaviour accordingly, and does not obfuscate and avoid.

Otherwise, besides the deleterious effects on his own soul, the road to chaos in the Canada he currently governs, will be short indeed.