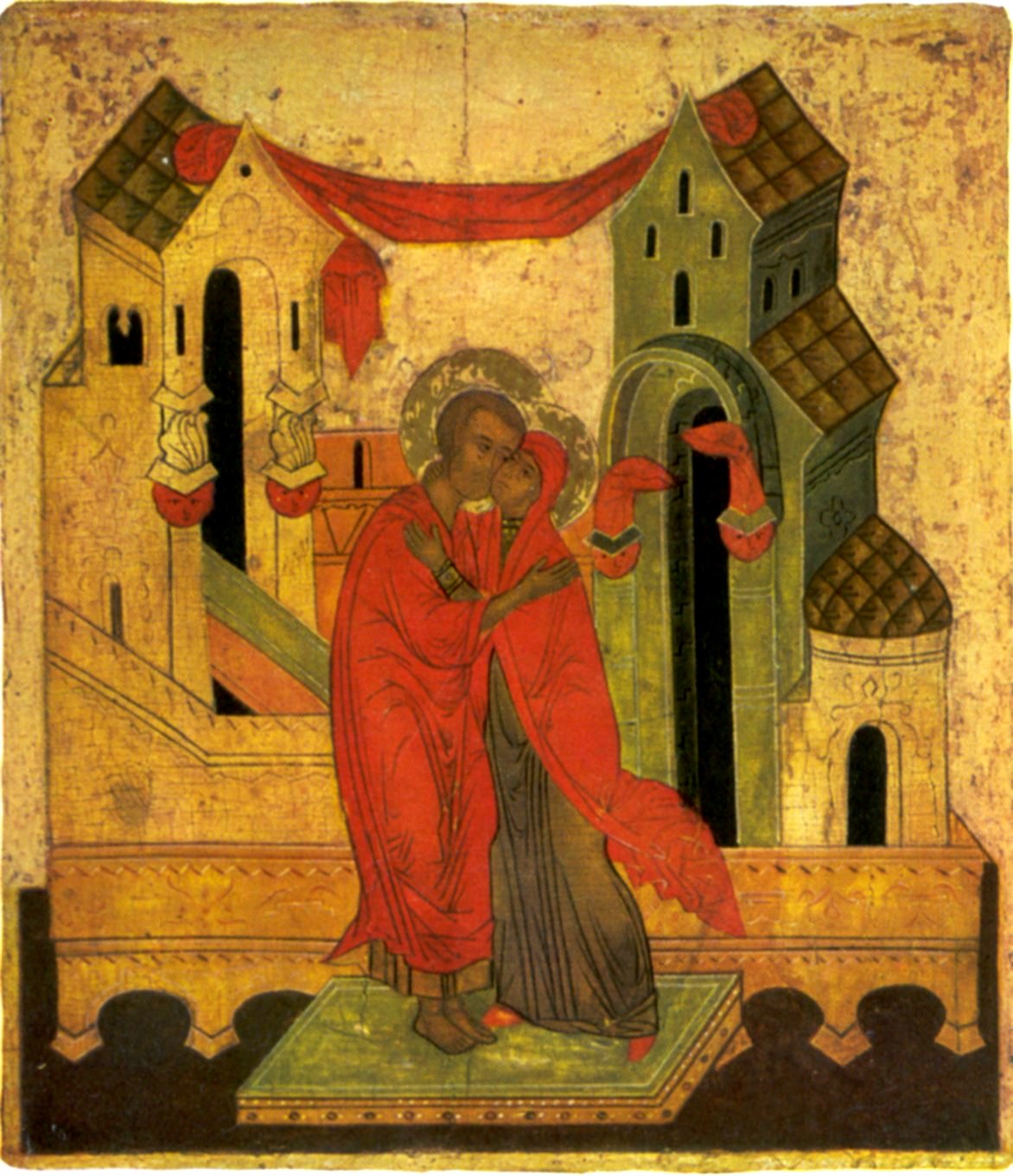 Let us sing praises to Joachim and Anna,
The couple honoured by God (as they are His kinsmen)
They have borne for us the Maiden
Who in a manner beyond understanding
Gave birth to Him who though fleshless
Became the incarnate to save the world
With her they intercede for our souls

July 26th marks the feast of Saints Joachim and Anne, father and mother of the Blessed Virgin Mary. I have always been intrigued by this couple, not only because Anne is my second name, but also because one has to wonder who could have raised someone like Holy Mary, the Glorious Mother of Jesus Christ. There isn’t a whole lot written about their lives, before or after having Mary, aside from what is contained in the Apocryphal Protoevangelium of James, but that doesn’t mean their lives weren’t deeply significant.  They were.

Joachim was a well respected and “exceedingly rich man” of the tribe of Judah who often doubled his offerings to God, while Anna was the daughter of a priest of the tribe of Levi. They were married for many years without children. In those days barrenness was seen as punishment from God and Anna was well past childbearing age. As Joachim went into the temple he was upbraided by a man named Rubim, saying it was not proper for Joachim to bring temple offerings, as he had no children. This grieved Joachim exceedingly and he went into the desert to lament, pray, and fast for 40 days and nights.

Meanwhile, Anne also grieved her barrenness, as well as her husband’s absence, which she called “her widowhood.” At one point, Anne sat in the garden praying to God in these words: “O God of our fathers, bless me and hear my prayer, as you blessed the womb of Sarah, and gave her a son, Isaac.” At that moment, an Angel of the Lord appeared to Anne and Joachim at the same time, telling them both to get up: the Lord had heard their prayer and Anne would conceive. There is a beautiful icon depicting the poignant moment where Anne and Joachim meet at the city gate (above). It was said that she “hung upon his neck saying: Now I know that the Lord God has blessed me exceedingly; for, behold the widow no longer a widow, and I the childless shall conceive.” In fact, the full name of the icon is “The Conception of the Mother of God.” As Jim Forest says in Praying with Icons, “No words better communicate how blessed is the vocation of marriage than the icon of Anne and Joachim embracing each other.”

St. Anne’s body, according to Pope Saint Leo III, had been buried in Apt, France following persecutions in Jerusalem, and eventually forgotten. The peaceful reign of Charlemagne allowed a beautiful church to be re-built on the site and during the consecration of the building, a fourteen-year-old boy who was blind, deaf, and dumb from birth, moved by the Spirit, lead Charlemagne (who was in attendance) to the remains of St. Anne that were wrapped in a “winding sheet” with an inscription saying, “Here lies the body of St. Anne, mother of the glorious Virgin Mary.” The boy was miraculously healed that day and the relics of Good St. Anne were venerated, and are still venerated, to this day.