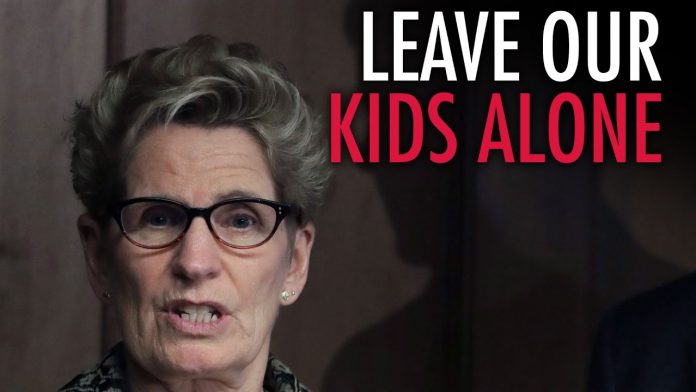 Cardinal Carlo Carafa, then President of the Pontifical Institute for Studies on Marriage and the Family, in a 2008 interview reported that he had received a letter from Sister Lucia, a Carmelite nun and the only surviving seer from Fatima, which warned:  “The final battle between the Lord and the reign of Satan will be about marriage and the family.”

There was a providential connection in this, for Pope John Paul II had been planning on May 13, 1981 to found the Institute, when he was shot point blank by Ali Agca, receiving a wound that should have been fatal, but was not, for, as the Pontiff later declared ‘Our Lady guided the bullet’, a bullet which now resides in the crown of Our Lady of Fatima.

Yes, Satan tried to stop the Institute, but succeeded only in delaying.  The battle for the family continues, as we read that the other day Bill 89 has passed into law in Ontario, the official title of which is the anodyne-sounding Supporting Children, Youth and Families Act, 2017.  But harmless it is not, as the following excerpt makes clear, and the key bits are in bold (my emphasis):

To recognize that services to children and young persons should be provided in a manner that respects regional differences wherever possible and takes into account,

a child’s or young person’s cultural and linguistic needs.

So not only is the government of Ontario meddling in the intimate life of families (as many who have had to deal with child protection services can attest), violating the principle of subsidiarity, but now they are meddling using immoral ideological principles.

There is an admirable summary of the legislation, and what it will entail, by Lianne Lawrence on LifeSite.

We should have a very healthy caution for the power of law, for when it reaches beyond its just scope, there is little one can do against the resources of the State. For now, this law will likely preclude any ‘homophobic’ parents, that is, those still sane enough to believe homosexuality and transgenderism are harmful for children as well as adults, from adopting.  So keep your heads low.  But the day may well arrive, sooner than we might think, when armed police officers show up at your door, demanding your children, ‘rescuing’ the poor waifs from the intolerant environment in which you are raising them.

Alarmist?  Perhaps, and I would hope so.  But would one have predicted such legislation as Bill 89, even a scant decade or two ago?

Gender ‘fluidity’ is a grave and fundamental evil, and it could be argued that it underlies many of the other evils we are facing, from abortion (women denying their reproductive nature) to the breakdown of marriage and the family (reversing the roles of men and women, unisex, same sex, triple sex parenting, polygamy, and on it goes).

As Pope John Paul II was wont to repeat, as the family goes, so goes society.  The Devil knows where to focus his attack, and we must resist, using what resources we have.  They may not seem like much, but God can do a whole lot with just a little.