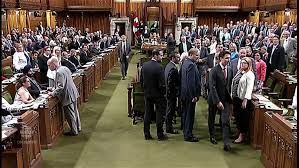 Most readers will have seen the bizarre behaviour of the Prime Minister yesterday evening.  As witnesses and the video record attest, Mr. Trudeau, in an apparent fit of pique at what he perceived to be a deliberate delay on the part of some Conservative members returning to their seats, strode angrily towards MP Gord Brown (Conservative), dropped the f-bomb, grabbed his arm, and ‘escorted’ him forcefully to his seat, in the midst of which he ‘elbowed’ female MP Ruth Ellen Brousseau (NDP), who had to leave the chamber in hurt and shame.

Trudeau at first, embarrassingly, attempted to justify his actions, claiming he was trying to ‘help’ Mr. Brown to his seat, as though he were a cripple. Now Mr. Trudeau is being more apologetic, as he was obviously caught on camera in an explosion of anger, one might argue outright assault, in not getting his way as quickly as he would like.

The 1866 Robert Louis Stevenson novella The Strange Case of Dr. Jekyll and Mr. Hyde is indicative here.  The story of the split personality of the genial and restrained Dr. Jekyll, who under the effects of a self-concocted potion turns into the unhinged and immoral Mr. Hyde, is really a tale of personality and character:  Which one in the end was the ‘real’ Dr. Jekyll?  We all have a bit of Mr. Hyde in us, with occasional bursts of unrestrained anger or other passions for which we repent.  Only the saints are who they are all, or most, of the way through.  Saint Philip Neri said that building virtue is like pulling weeds:  There is never an end to the depth and interconnectedness of the roots, and we must dig real deep to become truly good.

That is why, as the old adage goes, virtue is only tested in adversity. It is easy to be ‘virtuous’ when one is well fed, warm, comfortable, with a glass of port in one hand and plate of fine cheese and chocolate in the other before a roaring hearth, as I can attest from experience.  It is not so easy when one is standing in line at the airport, harassed, hungry, thirsty, inching forward, with babies crying and one’s sweaty undershirt stuck to one’s back, looking forward to an even more uncomfortable flight.

It is in these conditions that our mask slips off, and we see ourselves, and others see us, as we really are under the facade of our public persona.  Do we maintain our patience, kindness, equanimity when they are put quite sorely to the test?  Stories are told of Saint Edith Stein when she and a host of her fellow Jews and Catholics were hauled off in cattle cars to the concentration camp at Auschwitz.  While others collapsed into listlessness, anger, vituperation, the Carmelite saint, mystic and soon-to-be martyr walked around peacefully, helping others, combing the disheveled hair of the girls, calming the distressed mothers.  The saint was who she was, all the way through.

Is Justin Trudeau who he seems to be, we may ask?  Is he really an angry, petulant bully, a feted man used to getting his own way, furious, now that he is in the pinnacle of his power and prestige, that a few minority Conservative members dared to delay voting in the House?  Or was this an anomalous outburst, caught on camera for national consumption, for which the happy-and-sunny-ways Prime Minister is truly repentant?

I dare not judge his interior state, but it is curious that the vote that was being delayed was the assisted-suicide/euthanasia bill, an evil, even satanic, piece of legislation that, like the Nazi regime under which Saint Edith and countless others perished miserably, will give State-licensed-and-sponsored agents the right and duty to murder their fellow citizens.  The law is being touted under the banner of kindness, tolerance, freedom, autonomy, compassion and, yes, that global-catch-all, mercy.  But, as history demonstrates, there is little reason to presume it will end there.

Did the mask slip off the smiley-huggy-doe-eyed Mr. Trudeau, so zealous for abortion and euthanasia, demonstrating his latent totalitarian tendencies, ready to burst forth when opposition arises to his will?  If he feels empowered enough to manhandle a fellow member within the very halls of Parliament, and knock the wind, wittingly or not, out of a fellow female MP, what will he do when he faces real opposition?  The Prime Minister, now publicly repentant, is struggling to regain his Dr. Jekyll, but how predominant is his latent Mr. Hyde, and when, and how, will he reassert himself?

At this point, the Liberals have their way, and, although they might be delayed a bit, not much can stop their agenda.  Canadians have foolishly voted them a majority, and the minority opposition that sits like a rump in Parliament can offer just token resistance.  At the very least, even with this power, the Prime Minister should allow what little remains of our democracy to function, with what decorum and patience he can muster, whatever his interior state.

But part of me fears that we may soon look back on yesterday evening as a small sign of bigger and badder things to come.