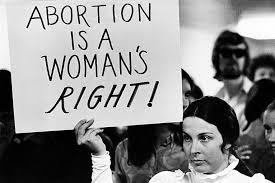 I share one thing in common with feminists:  I’ve never understood the women who call themselves “pro-life feminists.”  Being pro-abortion is not only the feminist mainspring, but it is the sole test question that says whether you’re in or out. Feminism is becoming increasingly trivial on small issues while being hostile to the one that matters most.

While there’s infighting among many prominent feminists about whether we live in a rape culture or whether there’s a wage-gap, they still haven’t and wouldn’t welcome a pro-life feminist into the mainstream fold. Perhaps because feminists are winning the war on abortion in Canada, the feminist ideology has lost its gravitas, and so it conjures up inconsequential problems to stay relevant.

The culmination of this is what I’ll call “clothing-disobedience.” Just recently in the UK, a part-time receptionist objected to a dress code that required wearing heels. Impassioned Twitter support followed against footwear—and dress codes in general—with work wear being used as a political prop of sexism.

“Slut Walks” expose thigh-high cellulite and unhooking their bras in the name of liberty.

In Ontario, since 1991, women have the right to go topless, and last year some sisters went for a bike ride without their shirts on. They might believe that nudity and clothing are worthwhile activism, or they might be exhibitionists, but either way they’re assured of a television sound bite where they can profess how clothing choices—or none at all—are the mark of a liberated woman.

It’s true that these minor tirades stem from the feminist belief in the right to autonomy over their bodies, but since the more vital war on abortion is still working in their favour, they’re getting sidetracked into an activism that petulantly refuses to obey any and all social norms. Any obedience, it would seem, is oppressive.

This is all good news to non-feminists and the pro-life. The media is quick to showcase these insignificant feminist victories and the disengaged take notice. Those indifferent to feminism—and therefore those who are more easily persuaded—can see that these protests, at their root, are not only an inflation of minor annoyances, but also a refusal to accept reality.

For example, a man who isn’t engaged in social activism knows intuitively that it’s dangerous for his daughter to go topless. He knows, like we all do, that most men are decent, but that predators are always scoping for their next victim.

The average woman recognizes that dress codes affect both sexes and that there’s a time for decorum. She doesn’t wear dirty track pants or a slinky dress to a funeral, workplace or church, as a way of showing respect.

It’s these indifferent people who peek briefly into the latest feminist kerfuffle, and come away saying, “Count me out.”

That may not necessarily count them in to the pro-life cause, but at least pro-lifers have a singular, clear and worthy mission. Contemporary feminism lacks seriousness and it’s dwindled down for a good reason: we are more or less on a level playing field. As they waste energy manufacturing inequities, debating footwear, and their right to peel off their T-shirts, we may only need to sit back and watch. It’s possible feminism will self-destruct under the weight of its own irrelevance.

Elizabeth King is a freelance writer living in Hamilton, Ontario.