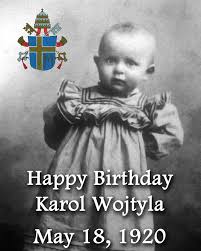 *Today would have been the 96th birthday of Pope Saint John Paul II, who died just shy of his 85 birthday.  Very few Popes have reached this venerable age; Pope Leo XIII, the oldest reigning pontiff known to history, reached his 93rd year.  I know not how old John Paul/Karol is in heaven.  Not having his body back yet, we may presume, he is now ageless, but enjoying the beatific vision.  So happy birthday, in your well-deserved ‘rest’ until, God willing, we all meet merrily in heaven.

*The Pope’s birthday falls, providentially, on the memorial of the first Pope to take the name of the beloved disciple, and that not until the early seventh century.  After an apparently unsuccessful mission to Constantinople on behalf of the Arian King Theodoric the Goth, Pope John I was cast into prison, where he died of neglect and maltreatment.  But, then, how could a Pope petition to allow Catholics to remain Arians?  So he died for the faith, a witness to the truth, as was his successor John Paul, albeit in a different way.

*I gave a talk last night in Ottawa at Saint Patrick’s Basilica Grotto, on the current Holy Father’s recent Exhortation, Amoris Laetitia, and its connection to law and conscience.  I will have a summary at some point in the near future.  But there were many questions, and many are (quite rightly) confused by some of the things the Pope had to say in the now much-commented-upon Chapter 8.  Here is the nub:  There can be no exceptions to natural law, including adultery, which in one sense may be defined as conjugal relations with anyone not one’s wife.  Pope John Paul was very clear in Familiaris Consortio that if you are in a non-marital relationship with a significant other, one must live in continence.  And the only way to be sure that the ‘significant other’ is your spouse is, quite simply, to get married.  If one cannot get married, then one cannot have sex.  The conjugal act is too important, too filled with ramifications for the couple, for the children, for society, to leave it in the realm of private conscience, with or without ‘pastoral guidance’.  The only avenue proper for sex is a valid, public, ratified marriage.  The Exhortation does not explicitly refute this, but opens a number of doors of ambiguity for the ill-willed to interpret as they may.  But more to come.

*As providence would have it, as I was leaving Ottawa this afternoon, approaching my car in the church parking lot, I met one of my former students and her husband, getting ready in their own car with their two beautiful boys in the back seat.  I say ‘providence’, since this happened to be day of their third anniversary.  Sometimes God gives us little favours like that.  So a very blessed and joyous anniversary!

*I also met a friend of mine, a lawyer who travels much in his business, if memory serves correctly, lobbying for the energy and environment, in good Catholic and good business sense of those terms.  Again, providentially, on the day that Kathleen Wynne’s Ontario Liberals’ Green Agenda was revealed.  Amongst the many ludicrosities, they want to wean every household off natural gas by 2030, with all of us heating our homes with ‘green’ electricity.  I am not sure how green electricity is (not much, I suspect) but this at the very least will raise heating costs, even at current rates (and they are rising rapidly) by 600%.  Yes, more than $3000 per year.  I mentioned to my friend that everyone tasked with making any decisions on the energy or the environment should be forced to take a rudimentary course on thermodynamics, the science of heat, energy and their various transformations.  It is not easy to get energy out of material, whether it be gas, sunlight, wind or water.  The more diffuse, erratic and non-transportable the source of the energy (as in wind and solar), the far, far less efficient, and far, far more expensive, it is.  But the Liberals care not.  They have their majority; they are on a mission; science, reality, along with the rights and needs of the people, not least those on a limited income, be damned.   Oh, and the debt will continue to balloon, if we don’t reach Greek-Venezuela-level default well before 2030.

*But rejoice.  Summer is on its way, this weekend proves to post temperatures in the high twenties (Celsius, for any American readers convinced that Canada is always cold and snowy).  So enjoy the ‘Victoria Day’ long weekend, in commemoration of the now second-longest-reigning monarch, Queen Victoria (63 years, 216 days), who was just passed this past September by her grand-daughter Elizabeth II (64 years, 102 days and counting).  Although I have reservations about Elizabeth’s religious views, and the history of the monarchy over my native Scotland and Ireland, she has reigned prudently overall, within the circumscribed limits of her power.  Long may she reign.

Or, for those not monarchically-inclined, you could just call this May 2-4, as we did in high school, for the obvious reasons that connect that number with a certain barley-based beverage, best served cold on a late spring day.  One way or the other, enjoy, all in God’s good will.