The early life of Saint Helena, or Helen, who is commemorated on this August 18th, is shrouded in legend, with some historical roots, as all legends have. Geoffrey of Wearmouth, the 11th century priest and historiographer (from whom we also get many of the tales of King Arthur) claims she was the daughter of the even-more-legendary 4th century King Cole of Britain, which both Catholic authors Evelyn Waugh and Louis de Wohl adopt in their own depictions of Helena – giving an English flavour, if you will, to the line of emperors. Yet she was also apparently a ‘barmaid’ (literally, a ‘stabularia‘, or stable-maid, an early version of a barista, one might think) – which would seem odd, for a royal daughter.

Other, more reliable, sources, have her hail from Greece – her very name is Greek for Greece – from the province of Bythinia.

One way or the other, she did catch the eye of the emperor Constantius Chlorus – so-called from his pale complexion. The story is said that they happened to be wearing identical silver bracelets, and Constantius saw the hand of fate. Whether she became his wife or concubine is uncertain, but she did give birth to the future Christian emperor, Constantine, on February 27th, likely in 272 A.D., even if they as still-pagan counted the years from A.U.C., ab urbe condita, from the founding of the city of Rome (in 727 B.C., but for them, of course, was year zero).

Helen was eventually divorced by Constantius, as is the way with wayward and whimsical emperors, and banished from the imperial court, but when her son took authority as Augustus in 306 A.D., she was brought back in full splendour. It is to Constantine’s credit, even in his pagan life, that he always honoured and esteemed his mother, and she was always a strong influence upon him. The adage that the hand that rocks the cradle rules the world was quite true in this case. Eusebius claims that Helen converted to Christianity soon after her son’s accession, and Constantine, of course, followed suit after his miraculous victory at the Milvian Bridge in 313, legalizing Christianity throughout the empire.

Helena is also most known for being the discoverer of the True Cross. Constantine gave her unlimited access to the royal treasury to seek out relics in the Holy Land, and what a relic that was. Confirmed by miracles, pieces of the Cross now reside all over the world (and it’s not true that their combined weight is more than the original cross).

Helena was an octogenarian when she returned from her long forensic pilgrimage, an early Indiana Jones, in 328. She died in 330 A.D., in Rome, with her son dutifully at her side, with her palace turned into the Basilica of Sancta Croce – of the Holy Cross – in Jerusalem (even though it’s not technically in Jerusalem, but Rome, near Saint John Lateran, it is considered part of the Holy Land with a portion of that land serving as the foundation). The basilica still houses some of the finest relics of Our Lord’s Passion and Death, and well worth a pilgrimage visit. 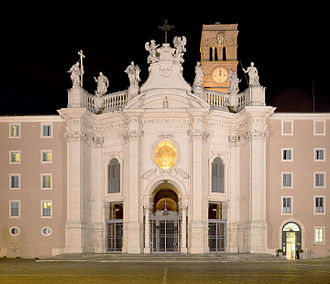 Ah, the worth of a good mother! Which, really, will never be fully known until that day of Judgement, when mothers throughout history, who toiled in obscurity raising children and forming homes, will be rewarded with something far greater than a palace or basilica or even ‘unlimited access to the royal treasury’.

How much more? Well, in the words of Han Solo, who is unwittingly following our Church’s great tradition, ‘more than you can imagine’. Indeed.

Saint Helena, pray for us, and for all mothers!