Mask Mania, militaristically mandated, continues, almost unabated, the talisman of the age, the sign of do-gooder-ism – no, not a pro-life t-shirt, or even any of those AIDS and other causes-ribbons that were the vogue up until not that long ago. No, it’s masking up. We should be thankful that here in Canada we have not reached the masking-fever of France, Australia and various parts of the U.S. where one is bound to cover one’s nose and mouth semper et ubique, always, everywhere, outside, wandering around, one may presume even paragliding, mountain climbing – the police are watching, with drones, and they will enforce this decree, as evinced in Australia by car windows being smashed open to make the occupants comply, or the video of a woman being choked by a burly male officer for being mask-less. If the virus doesn’t get you, a copper might. Ironic, since she had a ‘medical exemption’ for finding it difficult to breathe with a mask, as does everyone. Doubly ironic, since the police elsewhere – say, Chicago – stand idly by as vast swathes of downtowns get looted and burn.

Triply ironic since, as I alluded recently, the evidence is that masks are not all that effective, to put it mildly. Whether they do anything in protecting others is certainly a question, which is the mantra used in donning one, even if one is minded to take one’s own risks? Peruse this summary, and the scientific studies in the footnotes. We should decide and operate with reason and evidence, balancing what risk there is with our God-given rights, not with our feelings, or our gut, or with what everyone else is doing, or even what we’re told to do by state apparatchiks. After all, a scant few months ago, we were told masks were useless, then ‘wear one if you want to’, now to a universal masking mandatum. This is at least odd, for no science moves that fast.

Even the Church – or, at least, certain churches – now seems fully on board. One diocese has issued the following prayer for putting on one’s mask – I let out a slightly unintended off-colour euphemism when I first saw this, not believing my eyes, for it signifies an edge that one has toppled over: 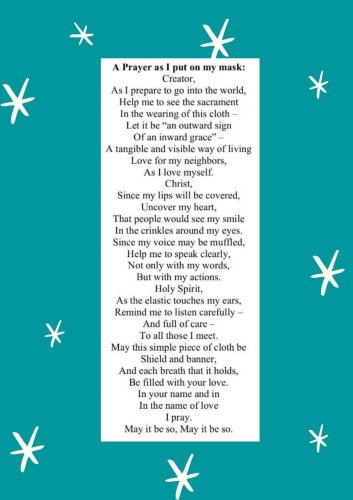 Priests used to say a prayer for each liturgical item they donned –  their alb, their cincture, stole, and so on, all signifying some virtue or aspect of the priesthood – but a mask as  a quasi-liturgical vestment? And, more than that, described as an ‘outward sign of an invisible grace‘, the very Thomistic definition of a sacrament. After that, what’s left?

When will Mask Mania end, you ask? Well, as I mentioned to someone the other day, there is no ‘principle’ for this ever ending. After all, if we accept the premise that we must take all precautions against making someone sick, with our breath, in this case, then what is to ever put an end to the madness? And what of passing along sickness with our hands, or with any degree of ‘close contact’ – two metres apart! Why would that ever end?

With a vaccine, you say? I believe these medical interventions have their place – the world would be a very different place without them – but how effective will this be in the current Covidian case, given the ‘effectiveness’ of the current flu vaccines, which are a crapshoot. And we may want to think twice or three times before injecting a hurriedly-concocted Chinese concoction, which may have a strange mode of operation in altering our very genetic code.  I’m not sure if this will actually be how this things works, but who’s to say? Plus, if this thing is derived from aborted baby parts, what degree of formal cooperation is at play?

And they’re already talking about punishments for those who refuse. Banishment from schools, from hospitals, from stores – Hmm.

My own view is that we should hold primarily a spiritual view on this. I don’t mean to be callous, but who knows if God didn’t send ‘Covid’ to take the advanced elderly on the brink of eternity to himself, before Trudeau and his assassin physicians could euthanize them, and commit a myriad of mortal sins.

We should protect life with due prudence, adopting what precautions we should amongst the most and truly vulnerable, and otherwise, get on with life, take what God sends, and hope for the best under the mantle of His Mother.

He knows what He is about, and will bring this to what conclusion He wills. Just wait and see.