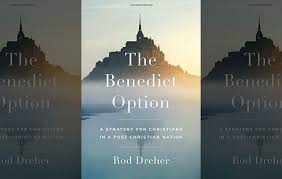 A review of The Benedict Option: A Strategy for Christians in a Post Christian Nation

After moving to Rome for my seminary studies, one of the first trips I made was to the town of Norcia. I hardly knew anything about the place, except that it is the birthplace of Saints Benedict and Scholastica. Two of my classmates were planning a weekend camping trip in the mountains around Norcia, and they invited me to join them. We made the 175km trip by bus, climbed a mountain, prayed together, roasted wild boar sausage over an open fire, and almost froze overnight. By my standards, that would have sufficed for a successful weekend, but God had something more substantial to offer us.

The next day we visited the monastery of St. Benedict in Norcia. We went to Mass in the Extraordinary Form of the Roman Rite, joined the monks for a simple but delicious meal (vegetarian cheesy pasta and bread), and chanted some of the Hours with them. Well, they did the chanting and we did our best to follow along. That was my introduction to monastic life. It was the first of many visits to Norcia, and, during my time in Rome, I brought dozens of people to experience the life of the monks.

What is the “Benedict option”? It is the idea that Christians need to be much more intentional in applying the Gospel to every aspect of their life – personal discipline, prayer, family, work, worship, community, etc. – and the Rule of St. Benedict provides great wisdom for how all Christians can accomplish this goal. It is not encouraging Christians to all become Benedictine monks or nuns, nor is it advocating a total retreat from the world.

The Benedict Option is a book well worth reading. I don’t say this simply because Rod Dreher shares my love for Norcia and its monks. It’s because The Benedict Option provides realistic and attainable objectives for all Christians. It’s not “pie-in-the-sky” idealism, and it’s not a rant about how everything is wrong with the world and the Church and everyone else needs to change. This is not a doom and gloom book. There are some gloomy sections, because he discusses the challenges facing Christians, but the focus is primarily positive and practical. It is, as the title indicates, a “strategy” book for all Christians.

Dreher begins with his personal experience of the 2015 flood in Baton Rouge, Louisiana, which caught everyone unprepared and devastated the region. He compares that literal flood to the tide of secularism that has swept over the West. The majority of Christians, Dreher argues, are “moralistic therapeutic deists”; in a nutshell, religious pluralists who think that life is about feeling good and being nice, and that they all go to heaven in the end. To many, this concept of Christianity may not seem problematic, but, in fact, it has opened the door to the irrational/immoral laws that are either already in place or will soon be enacted in Western countries. Alasdair MacIntyre’s After Virtue is Dreher’s primary text for this section, and I agree that it is an essential read for anyone seeking to understand our society’s current moral and spiritual malaise. To complete the analogy of the flood, Dreher turns to the story of Noah and the ark. He suggests that perhaps the way to survive this flood is not by continuing to throw sandbags around our houses but rather to build arks.

I appreciated the analysis of the stages leading to, as Dreher calls it, “post-Christian society” and “liquid modernity”. These are complex topics and having some understanding of these events helps the reader to understand the importance of the strategy that Dreher will develop in later chapters.

Readers beware: Dreher’s language is frequently dense. Throughout the book he often uses what my brother would call, “5, 10, and 15 dollar words”. I read a digital copy of the book, so thankfully a dictionary was already at my fingertips. Never be ashamed to use a dictionary. We have them for a reason.

The third chapter, my favourite, looks specifically at the Benedictines of Norcia. He begins, “You can’t go back to the past, but you can go to Norcia. And the glimpse of the Christian past a pilgrim gets there is also, I am confident, a glimpse of the Christian future” (p. 48). He argues that the Rule of St. Benedict is applicable to the life of every Christian. The rule was never intended for those who are strong. We are all weak, and we all need help growing in holiness. That’s the purpose of the Rule.

Dreher divides chapter three into what he considers the key aspects of the Benedictine life: order, prayer, work, asceticism, stability, community, hospitality, and balance. Using the personal testimony and insights of the monks, he explains each theme and its importance. The life of a monk is well ordered. His day is built around prayer, his work is directed to the glory of God, he practices asceticism so as not to be attached to the things of the world, he is rooted to the place that he lives, his community strengthens and supports him, he welcomes strangers as though they were Christ, and his life is held in balance by his obedience to the Rule, which falls neither into rigidity nor laxity.

In each of the subsequent chapters Dreher unpacks the Benedictine model and describes its applicability to every Christian. These chapters, which constitute two thirds of the book, are not always easy to follow because they don’t have a clear flow, but they are definitely worth reading. There are many valuable insights and good practical advice. They are the fruit of ten years of research and dozens of interviews.

Dreher’s reliance on “experts” and the personal testimony of people trying to live the “Benedict Option” is a strength and a weakness. It’s a weakness for the reason I stated above, but it’s also a strength because it makes the idea tangible. Many people – families, parishes, and communities – are already striving to live out the principles presented in The Benedict Option. Reading about these people helps to make the argument real: you can see how it works; you can see what doesn’t work; you will probably relate many of the experiences to your own life and to people you know. Being a “Benedict Option Christian,” as Dreher puts it, is nothing new. It is simply the deliberate application of the Gospel to every aspect of your life, and seeing the ways in which contemporary people are doing that makes it much easier to understand and imitate.

One example is the chapter on education. True Christian education is essential to the “Benedict Option”. Chapter 7, Education as Christian Formation, begins with the experience of Czech Christians trying to keep their faith during the years of Soviet occupation. Their situation wasn’t the same as ours, but we can learn from their strategies. Dreher also shares experiences from various Christian denominations and Jews in the United States. Families that weren’t satisfied with the education being offered in public and parochial schools have founded many new schools. There are great resources available for homeschooling, co-op homeschooling, and for building new schools. I am, in fact, a graduate of one of these new schools, Our Lady Seat of Wisdom, which is a perfect example of the “Benedict Option” at work.

Politics, law, church, community, liturgy, family, asceticism, education, work, sex, and technology are all important themes that Dreher addresses. His overall approach is positive, focusing on the good things that we can do to build truly Christian communities while also acknowledging the pitfalls. This is not a response motivated by fear or pride. It is about us re-learning how to build Christian families and communities.

In his conclusion, Dreher quotes a friend: “The moment the Benedict Option becomes about anything other than communion with Christ and dwelling with our neighbors in love, it ceases to be Benedictine. It can’t be a strategy for self-improvement or for saving the church or the world” (p. 237). Saving the Church and the world is God’s job. Our job is to be faithful in the circumstances that God places us. The Benedict Option presents a powerful strategy for being faithful in an unfaithful world.