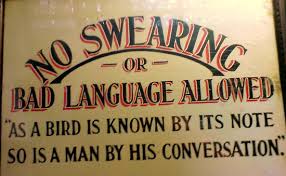 I have been asked to write about what is euphemistically, and rather incorrectly, known as ‘swearing’.  We have all perhaps heard our younger siblings yell, “Muuuum! Jimmy swore!”.

Yet Jimmy did not really ‘swear’, unless he is beyond his years, or brought into a court of law.  Swearing literally is taking a solemn oath, only permitted, as Scripture and Saint Thomas make clear, under the most serious of circumstances. One swears by something higher than oneself, as Christ said, often by God, but also by other sacred persons, things, or even one’s ancestors.

To take such an oath, to ‘swear’ without sufficient reason, or, worse, to perjure oneself by lying under oath, is a grave offense. This is especially grievous when one uses the Lord’s name ‘in vain’, either as an expletive or in anger.  This is what is known as ‘blasphemy’.  How grave this is for any individual only God Himself can really judge, but in essence, the name of God, of Christ or of any sacred person or thing should be treated with veneration and respect, as a prayer or invocation.

What we usually mean be ‘swearing’ is what Jimmy’s sibling meant: That he exercised his ‘potty mouth’, using either scatological or sexual language to emphasize his point.  We do this by euphemisms describing the lower actions of our nature, which we share with animals, with guttural and consonantal terms, often of one syllable, or the infamous ‘four letters’, and then let ‘er rip.  As you are aware if you watch movies or walk outside near any urban centre, our culture is now awash in such usage, as nouns, verbs, adjectives, adverbs, emphatics, commands and whatever else comes to mind.

Besides demonstrating a significant lack of vocabulary and imagination, there is nothing wrong with referring to these bodily actions in the right way and at the right time.  But there is a coarseness in using them in the wrong way, at the wrong time and with the wrong word.

First, to the sexual, which is the more serious, for sex is sacred, something holy, intimate and private, or it damn well should be (excuse me, but I think that was the proper use of a four letter word.  For one is indeed facing damnation by misusing this sacred act). To utilize terms referring to sexual activity, especially of the illegitimate variety, or to sexual organs, as a means of emphasizing one’s speech, shows a lack of respect for the sacredness and intimacy of sex. This is even worse when the terms themselves are degrading of sex, like the f-word, so ubiquitous that it is almost made irrelevant, but that itself speaks volumes.  People know not of what they speak, and what was it Christ said about idle words, and, I would add, especially idle words that are supposed to be sacred?

Scatological terms, referring to bathroom activities and related ilk, are also problematical. Some things concerning the more animal and bodily aspects of our nature should be veiled in privacy, for to bring them out into the open degrades us as humans by making us, well, too animalistic. There is nothing wrong or shameful about these activities in themselves, but they must also be put into their proper place and time.  No one really wants to be seen ‘going to the bathroom’, and to sprinkle one’s speech with references to various bodily effluences shows a vulgarity and lack of tact.

Indeed, in all of this, what is most wrong with ‘swearing’ (in the broad sense), and the use of such language, is that it leads to coarseness of soul, and, eventually, to coarseness in one’s actions. One whittles away one’s moral resistance, by giving way to one’s lower impulses, whether these be anger, or something more sexual and sensual.  It has been said that ‘clothes make the man’, but more true is that the thought makes the speech, which in turn reinforces the thought, which then makes the action, which really does make the man, if you follow my logic.

In short, we are how we think, speak and act.

‘Manners are the gateway to morals’, and manners are also the safeguard of morals. If we allow ourselves to become coarsened and unmannered, we will soon, methinks, become immoral as well, for we have ‘let go’ of that restraint upon our lower impulses.

Ponder the words of the Apostle James from the third chapter of his Scriptural letter:

For we all make many mistakes, and if any one makes no mistakes in what he says he is a perfect man, able to bridle the whole body also.
If we put bits into the mouths of horses that they may obey us, we guide their whole bodies.
Look at the ships also; though they are so great and are driven by strong winds, they are guided by a very small rudder wherever the will of the pilot directs.
So the tongue is a little member and boasts of great things. How great a forest is set ablaze by a small fire!
And the tongue is a fire. The tongue is an unrighteous world among our members, staining the whole body, setting on fire the cycle of nature, and set on fire by hell

Nay, it is only the man who can control himself, tongue, mind, body and soul, who can truly become master of himself. And it is just such real men that real women want.

A final note for Catholics out there, who think that vulgar speech is a good way to evangelize and ‘fit in with the crowd’:  Although it may be beneficial to adopt some aspects of those amongst whom we live and work, there must be a limit and a balance:  Would you get drunk, fornicate, blaspheme, or condone those activities in others? When it comes to speech, to be sure, one must avoid being a prig, overly censorious, or expostulating like an Oxford don.

Yet, it does not seem wise to lower one’s speech to their vulgar level, for one would simply be reinforcing what is disordered not only in them, but in ourselves, and this especially applies to sexual colloquialisms. Far better to show one’s fellow beings what it means to speak well, but vigorously, to tell a story without dotting one’s sentences with the f-word and other debasements. There are over one million words in the English language, give or take (most adults know only about 20-35,000, or about 3%, but use, we may presume, far fewer).  Well, let’s start using some of them, and elevating our lexicon, our manners and our morals.  But most of the time, do what Christ would do, using simple, direct speech, a much more effective means of evangelization.

And before we close this topic, allow me an anecdote:  I recall a film I saw years  ago starring Michael Douglas (often a bad sign), Falling Down, wherein he played a down-and-out angry white male, who just could not take it anymore. His protagonist was Robert Duvall, a hesitant, doubting, beta-male cop, ridiculed and mocked by his alpha-male police chief for, amongst other things, Duvall’s refusal to use foul language.  In one of the last scenes of the film, Duvall ‘stands up’ to the bullying chief, after he is congratulated, by responding, (I quote from hazy memory) ‘thank you, thank you very (f***ing) much’.  Ooooh…

I leave it to the reader to decide whether this made him more, or less, of a man.

I was waiting for ol’ Bobby to drive his metatarsal into the testicular region of the illegitimate offspring of a female canine, followed by a solid upper-cut.  (No intended slight to his mother, of course, for this is all analogical).

But even better, by far, would be to elevate the chief with some words of wisdom, that uncouth language befits not his badge nor his authority. Nor does it befit us as humans, eternal beings enfleshed for a time in an animal body, but created in the very image of God, and called to eternity with Him forever. In that light, should not all our language correspond with our own station and calling?