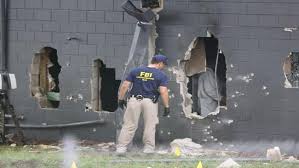 As you have likely read already, fifty people have been killed in an attack on an Orlando ‘gay’ nightclub, with fifty-three more injured, the largest individual mass-killing in U.S. history.  The alleged assailant was a 29 year-old Muslim man, Omar Mateen, a security guard originally from New York (hence, his permission to own assault rifles), although his parents are from Afghanistan.  Mateen pledged allegiance to ISIS in a 911 call to authorities during his attack, which apparently lasted for three hours.  He was holding the survivors of his initial rampage hostage (there were apparently 300 or so party-goers at the club at 2 a.m. when Mateen arrived).  Police stormed the building at 5 a.m., and shot Mateen dead.

We should also mention, lost in the international news of this massacre, the murder of Canadian Robert Hall, who had been held hostage by Islamic militants in the Philippines for the past nine months.  A ransom was demanded, which Canada has a policy of not paying,  a policy reasserted by Prime Minister Trudeau this morning.

Prayer should be our first response to such disasters, and may God receive the souls of all these victims in His mercy, and grant speedy healing to the survivors.  But we must also respond with a reasoned analysis of what horrific events such as this massacre signify.

What we see here are the effects of a deep and divisive clash of cultures.  I have written before that certain cultures cannot co-exist, for their fundamental principles are so contradictory, violent collision is inevitable.

Consider the current cultural landscape of the United States:  Abortion more or less on demand, sexual licence and the corruption of youth, homosexual ‘marriage’, transgenderism, enforced cooperation in contraception and abortifacients, widespread drug use with increasing calls for legalization, and, now, the spectre of euthanasia, with the culture of death reaching its crescendo.

There are many who disagree fundamentally with this culture, many of them following Trump, but they are, for now, willing to work within the democratic and legal process.

When one adds widespread and growing Islamic immigration to the mix, with its own highly moralistic, cohesive, but inherently coercive and fundamentalist response, should we expect anything less than such some sort of violent clash?

There is a are far deeper moral and metaphysical divide behind the bullets, the dead and the wounded.

Obama is being somewhat disingenuous when he calls for a climate of tolerance and solidarity.  He himself, along with those who follow his cultural principles, are quite willing to use force in their own nouveau secular Inquisition to coerce compliance for their immoral laws.  Middle-aged men stripping naked in change rooms in front of young girls because they think they too are ‘girls’ is not a recipe for cultural cohesion and peace.

What set off Mr. Mateen was nothing that extreme.  According to his own father, it was the sight of two men kissing in public.  Obama and his cohorts see nothing wrong with that, and even much that is good and noble.  Others would say that homosexuality and other moral aberrancies, along with their concomitant behaviour, are intrinsically disordered, but society should leave people free to do as they like with their affections, within certain bounds.

The problem is that those ‘bounds’ keep expanding.  One may appreciate the frustration of individuals like Mateen, without, of course, adopting his uber-violent reaction and that of radical Islam in general.  As far as possible, we should engage in respectful and rational dialogue (to say nothing of prayer and works of charity and reparation), to achieve some level of the aforementioned ‘cultural cohesion and peace’.  But the fault lines are there, and widening by the day, as the forces of immorality and disintegration become stronger, more virulent, more aggressive, now with all the force of law behind them.  How long can such deeply divided cultures coexist?

The Islam represented by Mateen and ISIS adds fuel to the fire, for they are not interested in ‘respectful and rational dialogue’, but in enforcing their own point of view by terrorism and force, so the infidel may ‘submit’ to the laws of Allah (as they see them).  Reports state that Mateen was ‘unhinged’, even insane, but he was acting in accordance with his deeply held convictions, shared by many of his co-religionists throughout the world.  At some level of his warped and seared conscience (we of course know not how deep) Mateen thought he was doing a good and noble deed; in his eyes, he died a ‘martyr’, and, we may presume, expected a blessed eternity as the police bullets tore through his own body.

Although there are likely only a very few Mateens out there (but we may sadly expect more of them, as ISIS calls for wholesale jihad against America), there are many who sympathize with him. In an unearthed video from 2013, an Imam in Orlando  declared that killing homosexuals is the right thing to do.

The numbers of those who concur with such views are growing by the day in the formerly Christian cultures of Europe and America, by immigration, by birth, united by their religion and its defined purpose.  This is not the place to discuss the historical value of Islam, but at least in its current embodiment, the religion of Muhammad as a general rule does not enrich and ennoble the countries it dominates, driven in large part by the internecine strife between Sunni and Shiite.  These crumbling, bombed-out, bloodied regions with no functioning economy or future, from Syria to Afghanistan, are the primary reason why Muslims are fleeing (one might politely say ’emigrating’) in desperate droves.

Amongst these droves are a few like Mateen, and it does not take many like him to foment societal chaos, deeply transforming a culture, and not for the better.  Already, fear and anxiety are on the rise, not least amongst homosexuals and their LGBTQ fellow-travellers.  We will now likely see an even greater enforcement of ‘hate speech’ by the State, with any criticism of homosexuality and its ilk now deemed illegal and punishable, as propaedeutic to such violence as we just witnessed.

But the paradox is that the more the State seeks to suppress freedom of expression, even ‘respectful and reasonable dialogue’ in which I hope this blog engages, the more the tendency to violence increases, as the only response left, whether by the State, or by individuals.  Violence of whatever sort is never the real answer.  Man must be moved suaviter and fortiter to the truth, in the depths of his conscience, something Islam, as a rule, disdains:  ‘Convince’, in its original etymology as ‘conquer’, by force and violence.

Alas, the deeper problem is that the conscience of America, and Canada, is itself seared and corrupt, increasingly blind to the truth.  We are a divided people, and drifting further apart, with the superficial strength of Islam taking up the centre, a process, so far, more advanced in Europe than here.

The future does not bode well, either for America, or our own Canada, or the world.  As I have written before, echoing John Paul II, at the basis of the culture of any nation are its religious principles, that which binds the people together in a common purpose and a common identity. However much we may nuance this truth to render it palatable to the wider public, the only real, long-term solution to our woes is a unified, integrated Christianity, as embodied most perfectly in Catholicism which, until now, has been our culture, and united us as a people and a nation for millennia (whether we realized it or not).

As we as a society lose our religion, we lose our culture, and, yes, our common purpose and identity, the result will be continued societal disintegration, with violence as the rule.  What will replace Islam, when it too falls as a house divided against itself, I hesitate even to ponder.

But a hint may be found in the words of William Butler Yeats, who penned so forcefully in 1919, looking back at the worldwide bloodshed and chaos of the First World War:

Mere anarchy is loosed upon the world.

The blood-dimmed tide is loosed, and everywhere

The ceremony of innocence is drowned;

The best lack all conviction; while the worst

Are full of passionate intensity.

We would do well to remember that Yeats’ called his poem ‘The Second Coming’, and what precedes this second advent of Christ, as his following words make clear, is the Antichrist,

the rough beast, its hour come round at last,

Slouches towards Bethlehem to be born

Evil is on the transcendent in our world, and we of sound faith must hold fast to the truth and goodness it offers us, shining, as Saint Peter declared, like ‘sparks amongst the stubble’, not with our own light, but the light of Christ, Who will achieve the final victory through these passing trials.