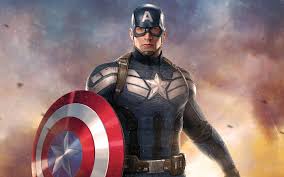 Alas for Captain America.  I know he is a fictional character, but, even so, he has had a rough time of it of late.

First, and the least of his problems, is the second-to-last film, Winter Soldier, about which I was going to write a review, until I heard the other two bits of news.  Someone had the audacity to claim that it is ‘perhaps the best superhero movie ever made’.  I will not provide a link to this comment, partly due to expediency, partly due to the taste and discretion, or lack thereof, in the reviewer.

Really?  I mean, the superhero genre is overcrowded, overdone, and overkill.  How many buffed-up guys and girls in various colours and forms of spandex (see my yoga blog) can one endure?  We are a long way from the initial thrill of the innocent and joyful surprise that was the first Spider Man in 2002.  (I will not delve into how many times one can re-do the origins of the arachnid geek-turned-hero, with another try coming out this summer).

Here is the nub, delivered to us via the great J.R.R. Tolkien’s (who knew how to tell a tale) On Fairy Stories (well worth a read):  Anyone who writes a story, and creates a mythical world, must maintain a consistent world-view, with all of the rules, laws and limits of that world, in order for the tale to be readable (or, now, watchable).  To lazily or deliberately violate the laws of one’s mythical creation would be to introduce chaos, entropy, confusion, boring and frustrating ‘surprises’, the lack of any capacity to enter into or even follow what is happening, and, ultimately, vitiate the story.

One example from Winter Soldier:  The opening fight between Captain America and whoever it is that Georges St. Pierre is playing.  Now, most you will know that Mr. St. Pierre is an actual mixed martial arts champion; that is why the producers had him in the film (it is not for his acting chops, although he does better than I thought he might).

The point is that Georges in the movie is a regular guy, with some training, while Cap’n is a genetically modified uber-mensch who can leap 30 feet straight up, jump from a plane moving at 200 miles per hour at 500 feet into the frigid ocean unscathed, and presumably bench press a Toyota Titan or two.  In other scenes, Mr. America easily handles seven or so trained fighters in the close confines of an elevator, rendering them all unconscious.

So, I ask, why the trouble with this one regular human?  Oh, visual effect, and, everyone knows it is Georges St. Pierre, so the fight had to last some time, with Captain actually exerting some effort.  Isn’t that cool?  Perhaps, but it is not consistent, and therefore not drama.  While I’m on the topic, where did Captain learn how to fight like that?  Wasn’t he a scrawny kid who couldn’t punch his way out of a wet paper bag?  Did the genetic-transforming machine also give him advanced karate/ju-jitsu/kung-fu/ skills, to leap his big frame around like the Olympian guy from Gymkata? (For those of you not from the eighties, don’t ask.)

The movie, and every superhero movie, even movies outside the genre, are filled with such lazy, inept storytelling. Who cares about plot, development, consistency, drama?

Well, I for one, and J.R.R. for another, for his essay emphasizes that ‘fairy tales’ (under which we would now put superhero films) are not just for children, but for adults (not least since children should be treated as potential adults, and read as such).  Hence stories must be made with some degree of intelligent construction, following the principles and rules one has instantiated, from beginning, to middle, to end, with the conclusion using these principles to tie everything, or most things, together in some sort of satisfying conclusion.

Contrast the slapdash, CGI-induced rubbish that is most modern movies with some good fairy-tale fare such as The Incredibles, the second (original) instalment of Spider Man, even, at least the first part of the first Batman, Dark Knight, or just about anything by Pixar, who spend time, money and thought in developing their movies and their plots.

So I did end up writing a review after all.  But I cannot end without briefly mentioning Captain America’s other two problems, which go way beyond the mediocrity of his films:

The first is that the comic book version (see the difficulty with inconsistent alternate universes?) has recently had Captain come out as a double agent, working all along for the Nazi-loving Hydra.  Couldn’t you tell from his Aryan blue eyes, golden locks and good old Nordic physique?

I wonder what the film version will do with this.  Many are surprised at the success of the Captain America franchise, since unlike many of the confused, depressed, alcoholic, sexually aberrant anti-heroes that fill our current genre of ‘heroes’, Steve Roger’s compass, as one reviewer put it, ‘always points due north’.  That is a big part of his appeal in our confused secular world looking for exemplars outside of Christ and the saints.

Do the scriptwriters at Marvel films really want to destroy their cash-cow hero?

The second problem adds fuel to the fire, and that is the push, not yet official, to have Captain come out not only of the Nazi closet, but of the homosexual one (but do they really need closets anymore?).  Yes, many now want Steven Rogers to fulfill his oh-so-obvious crush on his hypnotized army buddy, Bucky, aka, James  Buchanan Barnes (nicknamed the ‘Winter Soldier’, for rather lame reasons).

I am not sure if this will actually become part of the Marvel plot, but, given the way of things, I would not be all that surprised, especially after watching the long boring scenes of Captain moping with the beautiful-in-a-kind-of-libertine-Scandanavian-way-but-whose-looks-are-quickly-fading Scarlett Johanssen, aka, the Black Widow, the two of them wandering around like lobotomized, chemically castrated teenagers.  (On a side note:  What are the Black Widow’s superpowers anyway?  A bit of kung fu?  We need that to save the world? Well, at least she thinks so, as she declares in her best whiny valley-girl accent to the Senate panel at the end, “We’re not going to pri-son, you need us…”.  People pay for this?

Even a few years ago, moviegoers would have wanted to see the Captain and the Black Widow finally get together and produce some genetically enhanced babies, a la Clark Kent and Lois Lane, or Peter Parker and Mary Jane (who did ‘get together’, but who remained childless, so as not to complicate the DC-Marvel universe, one may presume).  But, no, not now.  Now it is the two bulked-up, stultified World War II war veterans (could you get more manly?), out to transvalue all values and tell us that even the best of heroes can swing the other way, so to speak, and there is nothing wrong with that, indeed much that is right.

Captain America as a homosexual, Nazi double agent.  Well, maybe it is a sign of the times.  After all, our heroes reflect not only what a nation would like to be, but what it may in some ways be already.