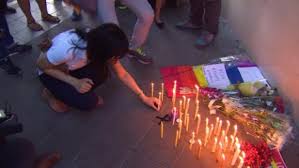 Well, that happened faster than even I thought.  Already, there are calls to outlaw any and all ‘homopobia’ in any speech, writing, discourse or thought.  As the narrative goes, the massacre in Orlando is mostly the fault of the Christians, and to some extent the Muslims, who came 600 years later.  In fact, ‘homophobia’ has its roots in all three of the monotheistic religions, Christianity, Judaism and Islam.  Neil MacDonald, the author of the article to which I refer posted (where else) on the CBC, blames in particular certain Old Testament passages of the Bible, which are indeed rather stark in their censoring of homosexual acts, and the punishments due thereto.  He leaves out the fact that 2000 B.C. was a rather brutal time, and that lethal or sort-of-lethal punishments were also decreed for adultery, murder, fornication, sorcery, treason, apostasy, and a number of other offenses, some of which we still denounce, others, not so much.

Cultures do change, but no so the truth.  I suppose we are now all supposed to rejoice in homosexuality, after all the dark ages up to the 21st century.

Here are MacDonald’s own words:

Now, after Omar Mateen armed himself, reportedly professed allegiance to ISIS and went hunting gays in an Orlando night club, could there possibly be a better time to have the same conversation about organized religion, and what responsibility it bears for the pain and misery and death inflicted on gays for so many centuries in the name of god?

And not just the Muslim god. That is happening now because of Mateen, and deservedly so, but restricting the discussion to Islam is far too easy.

Then begins his diatribe against the Bible and Christianity.

The blunt, ignorant article by Mr. MacDonald fails to make a number of requisite distinctions, necessary to understand the Catholic view of homosexuality.  He fails to discern that revelation is gradual, and that mankind was not prepared to receive the full truth all at once.  Even God has to work within man’s own limitations (see Christ’s words on divorce, permitted under Moses, but not under Him).

And can we please find another term other than ‘homophobia’, which literally means ‘fear of the same’? People who disagree with homosexuality are not ‘homophobic’. We do not fear, nor hate, homosexuals. In the absence of a proper term, I will at least try to describe what the Church’s view really is.

But first, I cannot speak for Judaism, which is multifold in its expressions, many forms of which seem to be only loosely religious, with a rather liberal view of homosexuality. Islam, on the other hand is in the main rather straightforward in its view of homosexuality: It is to be outlawed and punished.  However, even here, most Muslims do not call for their murder.  Even the Orlandonian Imam I quoted in my last post, who said that the ‘punishment for homosexuality is death’, was not necessarily calling for a killing spree.  He could have meant nothing more than that it is a rather ‘deadly’ activity, with high rates of disease and psychological disequilibrium, and that God will ‘punish’ them with death in His own time (something the father of Mateen stated after the massacre).

On a scientific note, even a passing glance at the rigorous and highly researched book by Robert Reilly, Making Gay Okay,  should convince any remotely unbiased reader that male-to-male ‘sex’ (which is not really sex) is fraught with a myriad of health risks.  This is just basic science, and not a moral argument.  I will not go into the details here, and you may read for yourself.

The Catholic Church’s view of homosexuality is nuanced, and the Church is not ‘anti-gay’.  Those with a homosexual tendency, which falls on a spectrum, are persons made in God’s image, and are owed the full truth of who they are and who they are meant to be.  Homosexuals are in their nature good, even if their acts are ‘sinful’.  But, then, so are many of mine and your acts.  Homosexuality is one of a number of disorders of the sexual appetite.  As the Catechism states, the “psychological genesis” of homosexuality “remains largely unexplained” (CCC, #2357).  The acts that flow from this tendency are “intrinsically disordered”, and cannot lead to mutual complementarity and affectivity (hence, the impossibility of homosexual marriage).

One may or may not accept this truth, but, like any truth, neither MacDonald’s nor anyone else’s opinion can change it.  The sexual dimorphism of the human race is written into our very nature:  We are called to sexual complementarity with a member of the opposite sex in matrimony, or to sublimate our sexual drive in a life of charity and active service.  Any deviation from the proper integration of sexuality within the person, termed ‘chastity’, harms not only the person, but also those he acts with, and those affected by his actions. The greater the deviation from this norm, the greater the harm.  Homosexuality happens to be one of the ‘greater deviations’

This may be a ‘hard truth’ to some, but one that we must accept, if we are to be fulfilled as human beings, and achieve societal stability.

That all said, as the Holy Father declared, the Church is a ‘hospital for sinners’, a category into which we all fall.   With homosexuals (and with all of us sinners) the Catechism states very clearly that “any unjust discrimination in their regard should be avoided”.  In fact, those with homosexual desires should be “accepted with respect, compassion and sensitivity” (CCC, 2358).

But we should keep in mind that the homoerotic activity in which homosexuals engage is damaging physically, psychologically, and spiritually.  We cannot judge the genesis of these impulses, nor their culpability, but we should take with a large grain of disingenuous salt Obama’s words that all the patrons of the ‘Pulse’ were there just to sing, dance and hold hands.  But they are looking for love in all the wrong places.

Rather than condemn them, we should strive to help in what way we can, and, in these days, stand in solidarity with their loss and the evil that has been done to them.

Islam does not in the main make these distinctions, as it is not a ‘rational’ religion, but an emotive and voluntaristic one.  As I mentioned, they take a rather blunt view of things, at least the radical, primitive version of Islam that Omar Mateen had adopted.

Yet, and yet, the plot thickens:  It is now being revealed that Mateen actually frequented the ‘gay’ bar where he later killed so many.  Was he a secret double agent, prowling the scenes of his future rampage?  Or a homosexual who hated what he was, who grew also to despise and hate those who were like him?

We may never know.  As I said before, we should offer prayer for his disturbed and twisted soul, and the souls of all his victims, as well as all the wounded and the grieving.

But we must also offer the truth, which cannot be changed by any tragedy, no matter how great.

All Saints’, Real Conversion Therapy and Hope Amidst the Ruins