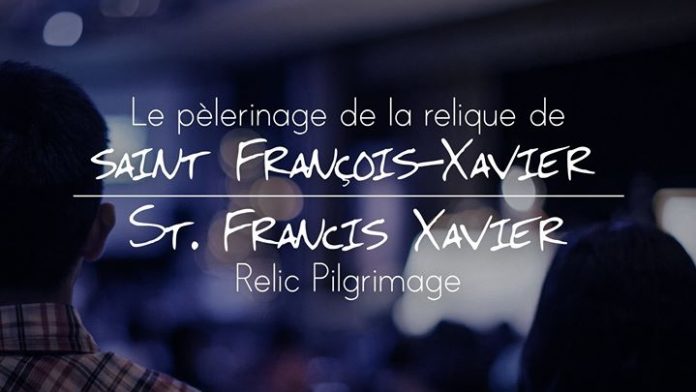 The forearm of the most famous missionary saint is coming to Canada, January 3 to February 2, as part of a 14-city visit organized by the Archdiocese of Ottawa, the Canadian Jesuits and Catholic Christian Outreach, a national university student movement.

“Saint Francis Xavier is one of the most revered saints of all time,” says Terrence Prendergast, SJ, Archbishop of the Roman Catholic Archdiocese of Ottawa. “He was a man of extraordinary courage and faith who shared the Gospel message of Jesus with thousands across southeast Asia, Goa and India.”

Permanently displayed at the Church of the Gesù in Rome, organizers believe this is the first time the relic has been on Canadian soil. His body, which is buried in Goa, India, as well as the relic of his arm, are incorrupt—they have not experienced natural decay since his death in 1552. Organizers expect close to 100,000 people will visit the various events across the country—the same number of people it is believed Francis baptized with his right arm and hand.

“Spending time with a relic such as this one can lead to immeasurable good,” says Angèle Regnier, co-founder of Catholic Christian Outreach. “It’s often a catalyst for a deeper encounter with God or deeper understanding of one’s vocation or purpose in life. There’s really no limit to what graces can come from this pilgrimage. We’re just thrilled to be able to help bring this relic to all Canadians.”

Born April 7, 1506 in the Kingdom of Navarre in present-day Spain, Xavier is considered one of the co-founders of the Society of Jesus, the religious order better known as the Jesuits. A companion of Saint Ignatius of Loyola, he led extensive missions into Asia, mainly in the Portuguese Empire of the time, India and Japan. He was the first Christian missionary to venture into Japan and is known as the “Apostle of the Indies” and the “Apostle of Japan.” He died on December 3, 1542 off the coast of China, which he had hoped to evangelize.

The veneration of relics is a longstanding practice inside and outside the Catholic Church. Within Christianity, the practice rests on the belief that God came to humanity in the flesh, namely in the physical person of Jesus of Nazareth. Important sacraments of the faith also include water, wine and bread—physical elements that take on spiritual, supernatural value and characteristics. Similarly, the relics of saints provide for a tangible experience of God’s graces. As well, Catholics believe that saints can intercede for humanity, given their proximity to God in what is commonly referred to as the “communion of saints” or the Mystical Body of Christ.

For information on the events, additional details on the life of Saint Francis Xavier, the practice of veneration or a portal into the faith aspect of this project, visit cco.ca/relic.