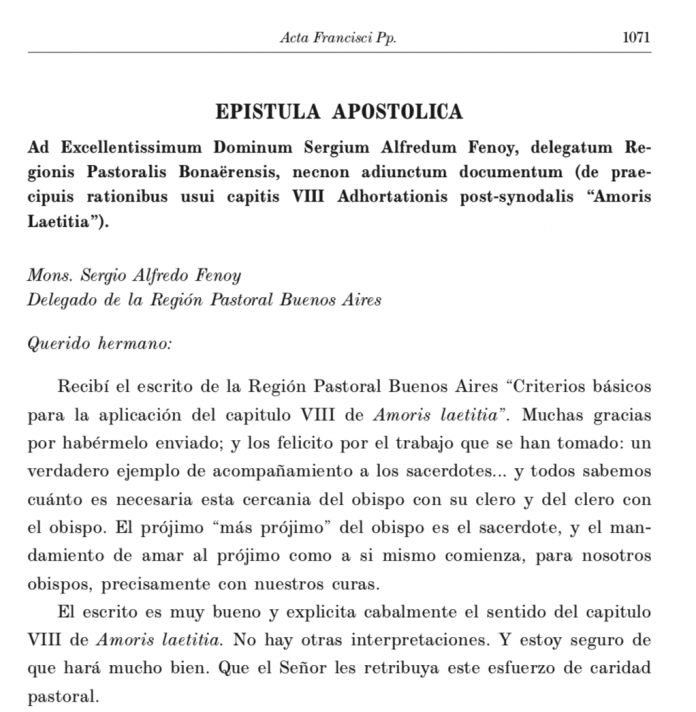 What are we to say about Pope Francis placing into the Acta Apostolicae Sedis (the official compilation of Magisterial texts) the interpretation of the Argentinian bishops of Amoris Laetitia, that divorced and remarried Catholics may in certain cases receive Communion, along with his own hand-written note that ‘no other interpretation is possible’?

Well, for one thing, although the Acta are indeed a compilation of what the Magisterium has issued, these ‘acts’ are of very varying degrees of authority, from the mundane and everyday, all the way to Apostolic Constitutions decreeing, for example, the Immaculate Conception of Our Lady.

I will have to look a bit more into this, and what the letter and guidelines specifically say. But for now, here are some preliminary thoughts:

In theology, precision and clarity are the gateway to the truth.  On face value, the Argentinian interpretation of Amoris (along with many others) seems to run counter to John Paul II’s decree in the last post-synodal Apostolic letter, Familiaris Consortio, back in 1981, wherein he stated rather clearly:

Reconciliation in the sacrament of Penance which would open the way to the Eucharist, can only be granted to those who, repenting of having broken the sign of the Covenant and of fidelity to Christ, are sincerely ready to undertake a way of life that is no longer in contradiction to the indissolubility of marriage. This means, in practice, that when, for serious reasons, such as for example the children’s upbringing, a man and a woman cannot satisfy the obligation to separate, they “take on themselves the duty to live in complete continence, that is, by abstinence from the acts proper to married couples.”

Those who have been excommunicated or interdicted after the imposition or declaration of the penalty and others obstinately persevering in manifest grave sin are not to be admitted to Holy Communion.

This canon is simply interpreting the natural and divine law in stating that ‘grave sin’, which include extra-marital sexual relations (whatever one’s subjective culpability) remove one from communion in the Church, which is why Pope John Paul II teaches that couples in cohabiting unions, from which they cannot extricate themselves, must either live in continence (which means no sexual relations), or refrain from Communion, for their own sake, and to avoid the scandal such would cause.

Pope Francis seems to be trying to maintain this doctrine in theory, while permitting certain exceptions in practice, that is, distinguishing right teaching (orthodoxy) from how such teaching is applied (orthopraxis).

Pope John Paul warned about such a move, declaring again that

The aim of pastoral action will be to make these people understand the need for consistency between their choice of life and the faith that they profess, and to try to do everything possible to induce them to regularize their situation in the light of Christian principle.

However, as the former pontiff immediately goes on:

While treating them with great charity and bringing them into the life of the respective communities, the pastors of the Church will regrettably not be able to admit them to the sacraments.

And here we arrive at the central question of the matter: Should full ecclesial communion be signified in practice (by receiving the Eucharist), before it is signified in natural and ecclesiastical law, by regularizing one’s marriage before the Church, before engaging in sexual relations?

I am not sure why everything seems to boil down to sex, but it appears as though some people just cannot live without it. Yes, we were made for marriage, that noble state to which most people are called. But even within the conjugal union, one must be prepared for long bouts of continence, in which there is no sex.

If one is in a marital-type situation not recognized by the Church, then by natural and divine law, one is bound to keep perpetual continence.

This is not easy in our fallen state, but then neither is life, nor salvation, for that matter. As he admits, the Pope is striving to accommodate and accompany those ‘on the way’ to living this fullness of truth of sex and marriage. However, if we were to admit or even imply that one ‘must’ have sex, and that keeping continence is impossible, then we fall prey to the heresy of Luther, who freed many nuns from many convents, convinced by the fiery preacher that they were living an onerous ‘impossibility’. To seal his point, Luther married one such ‘liberated’ sister on the run. Alas.

Whatever the Pope’s note and the Argentinian guidelines imply in the A.A.S, they cannot abrogate natural and divine law. Yes, we must accompany those who are ‘on the way’, and some situations are complex and difficult, but how far the Pope and the Church can go before the truth of marriage and sexuality themselves are accommodated and stretched to the breaking point, with all the deleterious consequences that will entail, well, we will see. And watch. And pray.