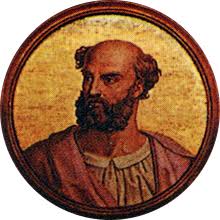 Today we celebrate Pope Damasus, who in his office in the Chair of Peter from 366  to 384, greatly influenced the history of the Church:  It was he who presided over the Synod of Rome in 382 which determined the Canon of Scripture (definitively decreed over a millennium later at the Council of Trent in 1546 in response to Luther’s, shall we say, ‘editing’, removing a number of the canonical books at his own whim and self-confessed erudition). Pope Damasus also commissioned the great Saint Jerome to begin translating the official version of Scripture, the Latin Vulgate, a heroic task that consumed most of Jerome’s life. Also, in 380, the Pope oversaw the recognition of Christianity as the religion of the Empire, under Emperor Theodosius. And, as well, he vigorously combated the heresies of Apollinarianism (which claimed that Christ had no human soul) and Macedonianism (which denied the divinity of the Holy Spirit), both condemned at the Council of Constantinople in 381, again, to which the Pope sent legates, and which he approved.  Finally, but not exhaustively, Damasus also promoted devotion to the martyrs, restoring their tombs in the catacombs, as well as repairing the church of Saint Lawrence,  fuori le mura, outside the walls, amongst the most popular of confessors for the faith, and still one of the main pilgrimage sites in Rome.

Damasus was accused of improper behaviour, but this seems to have been a vicious rumour begun by the heretics he condemned; fake news, it seems, has a long history. In reality, Pope Damasus lived and died in sanctity, his exact burial site somewhere outside Rome now lost.  But his memory stands forever.