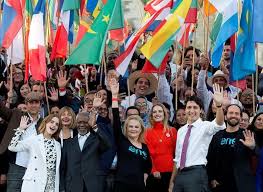 John Robson is right, when he decries the hypocrisy of Prime Minister Trudeau and his entourage of 225 ‘delegates’ to the ‘climate change’ conference in sunny and warm Morocco.  Yes, you read rightly, that’s 200 plus 25, along with Trudeau, his whole family, and one may presume an in-law  and nanny or two, trailing one giant plume of exhaust, leaving a ‘carbon footprint’ worthy of a entire medium-sized African country.  Do not think these ‘elites’ will be dwelling in tents and munching on nan bread; say not, for, as the best and brightest in whatever passes for climate-change-ology, they will, one may presume, be flown in first-class, lodged in at least four star hotels, with buffet meals, with all the waste that entails; valets and chauffeurs will abound, drinks charged to the taxpayer in the evening, and scrumptious breakfasts in the morning, soirees, and perhaps even a spa and massage or two.

From their royal perch, King Trudeau and his courtiers will be preaching the doctrine of abstinence from consumption for all and sundry; like the prophets of old, they will condemn all our, the hoi pollloi, ‘waste’ and ‘extravagance’, how we must reduce our own ‘carbon footprint’ asymptotically to zero, imposing heavy burdens on men’s backs, while scarcely lifting a finger to move them themselves.

Here is Trudeau, a millionaire and the scion of a millionaire, a dedicated ‘environmentalist’, who has perhaps never lifted a finger to do his own laundry, who jets everywhere at great expense on private planes with his army of sycophants in tow, planning to impose a ‘carbon tax’ on the entire nation, irrespective of the legitimate autonomy and will of each province and their Premiers.  Since we all produce carbon as a consequence just of staying alive, such a  tax amounts to a tax upon life itself, which is about as unjust, intrusive and burdensome tax as one could imagine.

One is not even permitted to debate, to say nothing of dispute, the ‘science’ of ‘climate change’.  Not only is carbon dioxide not a pollutant, it is the very ‘air’ upon which plants breathe, and we need plants, and lots of them, to live.  So do animals, which we also need.  Does carbon contribute to global warming?  Well, if the planet is reallly warming up (and  two or three years do not a trend make in the age of an entity like a ‘planet’), there may possibly, just  perhaps, be a correlation, but so many other factors go into the temperature of a planet (itself notoriously difficult to measure) that peeling out one factor is well-nigh impossible.

I cannot help but think that there is something far more sinister going on behind the scenes here, of which perhaps the likes of Trudeau and his fellow traveler David Suzuki (beware an octogenarian who wants to ‘leave a legacy’!) are not even themselves aware.  But someone, perchance, is.

Donald Trump is no saviour, but his denial of the pastiche-science of climate change is a healthy sign, and a recent article suggests that Trudeau may have to rethink his carbon tax scheme if America does not go along.  To cripple the Canadian economy on the basis of flimsy science is not a prudent move.  But Trudeau seems to have a bit of a saviour complex himself, and his evangelical zeal for all things ecological borders on the unhinged.

But then truth is the adequatio rei et intellectus, the conformity of the mind to reality, and Trudeau, and the oligarchic political class, do not inhabit reality, or at least the same reality as most readers of this column.

The one saving grace is that reality, and truth, always win in the end.

So have hope. Christ has already overcome the world, and all the illusions thereof.