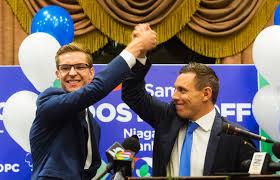 So Mr. Oosterfhoff has won the by-election, becoming the youngest MP ever to win a seat in the provincial legislature.  I wish him and his constituents all the best, but still stand by what I wrote, that there should be certain criteria for leadership, whether by custom or by law.  Ideally, we as voters would and should just know who would make a good candidate, but things have become so disordered, the whole system so open to abuse, demagoguery, buying votes, holding all those dependent on the government hostage to one’s positions, that we need more than a major overhaul, a revolution of sorts.

There is this that will limit Mr. Oosterhoff, and perhaps allow him to grow into his office:  Members of parliament in whatever legislature, federal or provincial, have little or no power.  In the infamous words of Pierre Elliott Trudeau, ‘they’re nobodies’.  I don’t mean this in any derogatory sense to the new delegate or anyone else (but cannot speak for the intentions of the deceased Trudeau).  It is just that power has been concentrated very much ‘at the top’, with the Premier and Prime Minster and their hand-chosen cabinet members doing whatever they want, making all the decisions, and ‘whipping’ their members (yes, that is the verb they use) to vote in the party line.  Whoever thinks we live in a democracy should examine how things are actually run. We are rather in a semi-functional socialist oligarchy.

At least Mr. Oosterhoff professes Christianity and, we may presume, some true conservative principles.  However, ‘conservative’ must mean more than simply ‘not being pro-abortion’, but, rather, having a desire, mission and capacity to preserve and apply all of the best and most noble principles and mores that have been handed down to us by our ancestors.  Does he have that capacity?

The sad thing is that there are likely legions of young ‘political science’ students out there across the country, and there are quite literally thousands of them, in their teens and early twenties, whetting their chops for a chance to organize their own run at office.  What else will they, and the innumerable others following unproductive degrees, do upon graduation?

For we live in the midst of socialism, and the only way to make a decent living now is to be born of rich parents, and inherit a wealthy portfolio, or attach oneself most firmly to the government teat.  Those who actually work in the private sector, producing wealth and things that increase the GDP of the nation, all the ‘working men’ described by Leo XIII in Rerum Novarum ‘by which a state grows rich’, well, they are being well and truly ripped off, treated as chumps, taxed beyond their means to support an ever-metastasizing State bureaucracy, whose employees demand near-ubiquitous six-figure incomes, benefits, parental leave, holidays, expenses, paid trips and excursions, all, of course, ‘for your benefit’.

But the benefits, alas, are almost all one-sided, and who knows when the tipping point will be reached?