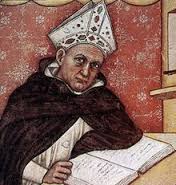 Saint Albert was called the ‘great’ even during his lifetime, rumoured to have known everything there was to be known, which may have been sort of possible in the early thirteenth century.  He certainly wrote on almost every subject, and his insights provided much of the basis of what we now know as ‘science’.  One of the first Dominicans, a preacher, scientist, philosopher, prodigious writer, indefatigable walker across thousands of miles of Europe (in their spirit of poverty, the Dominicans were forbidden to use horses), eventually bishop of Cologne and, not least, the teacher of the pupil who would outshine even his own fame, Thomas Aquinas. They were lifelong friends and, even though older, Albert outlived his younger disciple, and wept upon hearing news of Thomas’ death his former ‘dumb ox’ (as he was nicknamed in school, thinking his silence implied mental deficiency) journeyed towards the Council of Lyons in 1274.  Albert would follow Thomas into paradise after a long and fruitful life, in 1280.

Both Albert and Thomas are the patron saints of ‘learning’ in the broad sense, of teachers, students, scientists, all those who pursue the truth. But being open to the truth requires a rightly-ordered will, that one desires the good that is at the basis of all truth.  For even ‘truth’ can be distorted and warped by, and to, our own whims and desires.  Purity of mind requires purity of body and soul, or as the Catechism puts it:  There is a connection between purity of heart, of body and of faith (#2518).

Just after this is a quotation from Saint Augustine, upon whom both Thomas and Albert based much of their own thought:

The faithful must believe the articles of the Creed “so that by believing they may obey God, by obeying they may live well, by living well may purify their hearts, and with pure hearts may understand what they believe”

Orthodoxy and orthopraxy, right thinking and right living, stand or fall together.  That is why the great John Paul II declared that clarity in the realms both of faith and of reason are required for the formation of the human mind and soul.  Without faith, reason becomes rationalism, a over-dependence upon Man’s vacillating and weak intellect, and we have see the evil fruits of that in the atheistic totalitarian regimes, building utopias without God and without charity; in the application of technologies without a solid moral framework.

Without reason, faith becomes fideism, descending into something bizarre and erratic, justifying much evil in the name of ‘God’, as we see in branches of Islam and other religions, that refuse to see that reason itself is a work of God, and a manifestation of the very mind of the Almighty.

The only answer is a harmony between the two, faith and reason, found most perfectly in the principles offered by great scholastics, embodied in Albert and Thomas, who integrated in their own lives the harmony between and perfection of soul and mind, holiness and intelligence.

Here are the words of Pope John Paul describing Saint Thomas, whose own singular and unique mind and writings were perhaps the greatest testament to work of Saint Albert:

Saint Thomas is an authentic model for all who seek the truth. In his thinking, the demands of reason and the power of faith found the most elevated synthesis ever attained by human thought, for he could defend the radical newness introduced by Revelation without ever demeaning the venture proper to reason. (FR, 78)