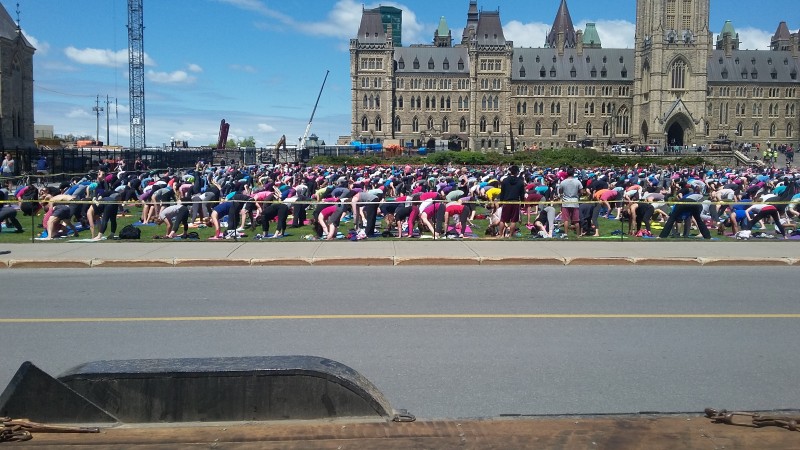 Last week, I was walking through Ottawa, and what greeted me on the vast lawn in front of the Parliament buildings was a sight to behold:  Hundreds of raised posteriors in various tight-fitting spandex doing yoga exercises, to the voice of an unseen young woman on a remote microphone.  I was quite literally flabbergasted, and I felt sort of bad even taking the photo (I waited until they adopted a more modest pose):  But to see this sea of adult humanity stretching, bending, breathing, hands on hips, hands outstretched, one leg, two legs, all in unison to the soothing female voice, right in front of the halls of our federal government was disconcerting.  I had never seen yoga in action, at least not really.  I recall vaguely my own father standing on his head once, which I think was ‘yoga’, but this was something else all together.

Yoga has a long history, with origins in India sometime in the sixth to fifth centuries prior to Christ, and there is no end to the literature on the topic.  Of course, the spirituality is pagan, both Hindu and Buddhist, and to this day yoga maintains these non-Christian roots, principles and ends.

That said, like any other spiritual system, exercise, method, call it what you will, there is some good in yoga.  There is nothing intrinsically wrong, and likely much good, with certain bodily postures, stretching one’s ligaments, breathing and relaxing properly.  The question is, can one take the good and leave the bad?

Although I would like to think so (one may ponder Eastern martial arts like judo and karate, most of which are just training exercises now, with little or no spirituality), but the problem in yoga is that the practices are almost inextricably wrapped up and intertwined with its spiritual aspects  I heard the young announcer tell the hundreds of stretching adults on the lawn to adopt the ‘goddess’ position.  Hmm.  I am not sure what that was, but it seemed to involve holding one’s hands on one’s hips in a defiant pose.  Or perhaps I am imagining things.

I wrote recently on the Church’s view of using Eastern practices in prayer, citing the 1989 Congregation for the Doctrine of the Faith document Some Aspects of Christian Meditation.  Therein, the Church does allow for certain ‘Eastern’ techniques (itself a rather vague term), but with a good degree of caution:  One’s prayer must always be Christocentric, based on the principles of Christian revelation and never deviating from them.

The same could be said in an extended way for using yoga as exercise:  If one is keen on yoga, take what is beneficial for one’s body and mind, and leave behind the rest.  Or, better yet, ally the Eastern techniques with one’s Christianity, recite the name of Jesus and the saints while meditating and breathing in a hesychastic way, avoiding postures, prayers, mantras and anything else that is connected explicitly with paganism.

Is this possible?  I don’t know enough about yoga to say for sure, but I can say that I at the very least would not do what I saw all those  hundreds of adults on the lawn doing, at least not in public.  And I certainly wouldn’t be wearing the stretchy, skin-tight pants, raising my spandexed posterior into the air for all to behold.

While we’re on that note, I will leave you with one other question:  Why can they not wear a bit more loose-fitting garb?  There is no way they had spandex in fifth century B.C. India, nor much for that matter in the 21st century, so why not go back to the sources, with the rather beautiful flowing robes of the original yogi (or yogini)? I asked a priest friend of mine, who witnesses and prays on Parliament Hill daily, and he said the hundreds of participants meet twice a week, the whole thing funded by a clothing company, which he had to look up on his phone.  I already knew the answer:  Lululemon, whose ‘yoga pants’ are the bane of modesty everywhere.

Besides the clothing issue, there are probably better and more Christian ways to exercise.  Like fencing, boxing, cycling, kayaking, all transferable to real-life skills (yes, I admit I am a bit biased).  But if yoga is your thing, be sure to Christianise it, in the true spirit of inculturation.  And you may want to be just a tad bit more private, especially if you do go for the spandex look.