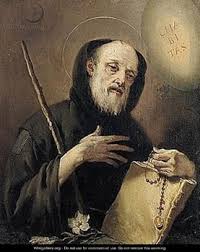 This April the second marks the memorial of Saint Francis of Paola (+1507), founder of the ‘Minim’ friars, so called for their humility and poverty, who interpreted the rule of Saint Francis of Assisi – by whose heavenly intercession Francis had been conceived, and later healed – in a very strict manner, foregoing all animal and animal-derived products, and his love for all God’s creatures was legendary, even raising, apparently, a half-eaten fish and fully eaten lamb to life. Early vegans, of a sort, were these Minims, but for spiritual, ascetic and redemptive reasons. Like many of those saints who practised what seem to our eyes extreme mortifications, His thaumaturgic life was filled with miracles – often a charism of ascetics and mystics, signifying their deep, liminal connection with the divine – healings and raisings from the dead, both human and animal, foretelling the future, including his own death on this day, a Good Friday that year, as he had the Passion according to Saint John read to him.

The Order founded by Saint Francis of Paola was approved by two Popes, Alexander VI and Julius II, both worldly and immersed in the politics of their day. The former was one of the Borgia popes, who had the Dominican preacher and prophet Savonarola put to death (see the intriguing account of their conflict in the The Meddlesome Friar and the Wayward Pope by Michael de la Bedoyere (1958)). While the latter Pontiff, Julius II, would lead his own papal troops into battle, fully clad in armour. He also began the re-construction of Saint Peter’s basilica, and his own struggle with the headstrong artist Michaelangelo is recounted in the 1965 film The Agony and the Ecstasy, with Charlton Heston and Rex Harrison). We may suppose the two worldly popes saw something in this decidedly unworldly friar, and the way of life he inspired, quite unlike their own. But, then, the Catholic Church is a big tent, and all sorts jostle therein – social distancing and otherwise.

Francis, never ordained a priest, unlike most founders of religious orders (but like his namesake of Assisi) kept himself far removed from these intrigues, spending most of his life in prayer and good works in his beloved Italia – a fitting intercessor for that beleaguered nation. Towards the end, at the direct order of the Pope – the only way he would go -the humble friar spent his final days advising the King of France, Louis XI, as well as the young Dauphin, Charles VIII. On his way to Paris from the Mediterranean coast, Francis healed many, including scores of those afflicted with the plague. Again, a double intercessor for our times.

In one incident, Francis used his cloak to ‘float’ cross a body of water – it seems the coat was both a boat and a sail – when the boatman refused him passage, a feat commemorated in the second of Franz Liszt’s Legendes for piano, ‘Saint Francois de Paule marchant sur les flots’, a sort of miracle for the piano itself, as is much of Liszt’s music.

Life is full of such miracles, if we had but eyes to see, and ears to hear…

Today is the 15th anniversary of the death of Pope Saint John Paul II, who displayed in his final years, months and especially days his truly heroic soul, as well as the value, even the joy, of redemptive and ‘salvific suffering’ (Salvifici Doloris) on which he had written so eloquently in 1984, on the feast of Our Lady of Lourdes. Well, well worth a Lenten read, or re-read, even if you just read my inferior summary of the Holy Father’s reflections.

Prayers for one and all.