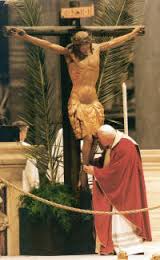 In, 1984, Pope Saint John Paul II penned an Apostolic Letter on the mystery of human suffering, Salvifici Doloris (curiously, now looking back, the same year he made his first apostolic journey to Canada).  One priest in a talk I heard recently mentioned that it may be remembered as one of his most prophetic works, with which I concur.  I long ago included the Letter in my syllabus on Magisterial teaching, and now with the looming shadow of euthanasia about to inundate the world, John Paul’s words seem more a propos than ever.

Human suffering is a curious thing, not least since we live in community and in history:  We can recall our sufferings, and, with a certain amount of dread, look forward to future ones.  We write about our sufferings, and more commonly read of those of others, so  participating vicariously in what others have gone through, whether this gives us pleasure, or pain, or perhaps a tantalizing mixture of both.  I just read of a young family in Donegal, Ireland (where my father’s relatives are from, and where he and I took a cycling trip, again curiously, in 1984), father Sean McGrotty, 49, brothers Mark, 12, and Evan, 8, aunt Jodie Lee Daniels, 14, and grandmother Ruth Daniels, 59, along with a baby Rioghnach-Anne, who after dinner drove their jeep to look out over a scenic inlet, the aptly named ‘Lake of Shadows’.  Tragically, the vehicle somehow slipped on the moss-and-algae covered pier, plunging into the cold, dark water.  The waterlogged electronics  jammed the doors and windows shut, so their SUV, at first buoyant, slipped slowly down, filling with sea water.  A young man on shore, Davitt Walsh, witnessing this stripped to his boxers and courageously swam out, trying in vain to rescue them.  The father, Sean, managed to pass his infant daughter to the water-treading rescuer, I suppose through a window he managed to pry open or that was ajar:

The father just looked at me and said, ‘Save my baby,’” Walsh recalled in an interview with Raidio Teilifís Eireann, the public broadcaster in Ireland. “… I couldn’t do anything else. The car went down. The whole lot went down. It was so fast

I reflected on this story on this Good Friday morning, along with the tragedy of the recent terrorist attacks in Belgium, the persecution and enslavement of Christians, the daily crimes against life, and all the other tragedies  of our world, as I re-read John Paul’s letter, an unsurpassed synthesis and summary of the Church’s teaching on the mystery of suffering.  We suffer, says the Pope, when we are in the presence of an ‘evil’.  But we should be clear that evil has no positive existence, but is rather a state in which a good is missing, which should normally be there.  The more desired is the missing good, the greater will be the experience of evil.

The Holy Father emphasizes the subjective dimension of evil, that the primary locus of evil is within the suffering subject, in what he terms the ‘world of evil’.  The exterior dimensions of evil, hunger, aloneness, war, pains of the body, only give us some glimpse into what is occurring within the person.  These so-called physical evils, wherein something objective is ‘missing’, are really only one of the  gateways, if you will, to ‘real’ evil, spiritual or moral evil, deep within the identity of the person, in their ‘soul’.

The Holy Father examines what really is the definitive evil that Man can experience.  Most might say ‘death’, the dissolution of the body, and this indeed is to many the ultimate evil, the very cessation of existence itself, or so they think.  As the Pope says, the evil which is death indeed has a “definitive and total character”  but is also “in a certain way…beyond all forms of suffering” .  It removes our experience of evil, but is also the worst evil.

Or is it?  That really is the question.  It is a revealed dogma of our Faith that Man is an immortal being, whose life and actions here and now in some mysterious way determine his eternal destiny.  At least somewhat mysterious:  Christ has made it clear that we will be ‘judged’ at the end of our lives on love.  Not some emotional, vaporous, self-indulgent love, seeking in subtle ways our own selfish good, but divine, real, sacrificial love, ‘willing the good of the other’, as Saint Thomas put it, or ‘loving our neighbour as ourselves’.  There is nothing that so evinces, and is so requisite to, love than the willingness to suffer for the other.

I am more or less convinced that at some level every person knows they will be judged on love, and the real evil is to reject this love, to live a life of hatred of others, subtle or not, closed in upon oneself in bitterness and anger.  To live in this state for eternity is what the Church means by ‘hell’, in the words of the Catechism, “the state of definitive self-exclusion from communion with God and the blessed”.   This is the real ‘evil’ from which Christ, become Man, willed to save us.

As John Paul sums up:

It is in this light that we should see the sufferings of this life, and why they are not only to be borne with patience, but, if one can by grace muster it, even accepted with joy.  As the first Pope told us, quoted by his 264th successor, “But rejoice in so far as you share Christ’s sufferings, that you may also rejoice and be glad when his glory is revealed” (1 Peter 4:13)

There is still a mystery here.  Why suffering as a means to holiness and final redemption?  The key to answering this mystery lies in the reality of sin, the primordial evil wherein Man rejects God, refuses to serve and obey, and exalts himself against his Creator and Father.  Without sin, there would be no need for suffering, for it is suffering, John Paul states, that allows us “to become particularly susceptible, particularly open to the working of the salvific powers of God, offered to humanity in Christ”.  Suffering allows us to see ourselves as we really are, by revealing to us in our “weakness and emptying of self”, that, at the end of the day, and at the end of our lives, we are totally and utterly dependent upon God.

Of course, Christ Himself did not ‘need’ to suffer, and Saint Thomas declares with logical clarity that He could have redeemed us some other way.  However, the Way He did choose was the most fitting, the most perfect, both to redeem all of our own ‘evils’ at their very root, and to offer us a way to follow that He Himself trod, in all the weakness of His humanity. Again Saint Peter:

For to this you have been called, because Christ also suffered for you, leaving you an example, that you should follow in his steps. He committed no sin; no guile was found on his lips.  When he was reviled, he did not revile in return; when he suffered, he did not threaten; but he trusted to him who judges justly.  He himself bore our sins in his body on the tree, that we might die to sin and live to righteousness. By his wounds you have been healed.  For you were straying like sheep, but have now returned to the Shepherd and Guardian of your souls (1 Peter 2:21).

Further, Christ does not need our sufferings, but allows us to suffer so that we might participate in His redemptive work for our own sake, so that we become more conformed to Him, hence to God.  As John Paul puts it, “through suffering those surrounded by the mystery of Christ’s Redemption become mature enough to enter this Kingdom”.

One final note:  Just as Christ could suffer for others, while needing none himself, so too we can suffer for others, even if we need it not.  This is the mystery of our unity in the Mystical Body of Christ, and why innocents like Christ, our Lady, and, yes, saints and even little children can suffer, plunging unexpectedly to depths of the Irish sea on an early spring evening.  Such vicarious suffering can ‘make space’ in the sin-hardened and deadened-conscience souls of others for the redemptive grace of Christ, even if they refuse to ‘make space’ themselves.

Of course, this is nowhere near the modern, utilitarian mindset, which sees all things governed by blind chance, with life nothing but a protoplasmic accident waiting to return to the oblivion whence it arose.  To them, the Donegal family, the passengers waiting in the check-in line at the Brussels airport, those unlucky enough to still be stuck in Syria, were all in the wrong place at the wrong time.

But to the Catholic mind, there is always a reason, and nothing really happens by ‘chance’, for all things, from the smallest to the greatest, are in God’s providence (CCC, #303).  To the victims of such manifest evils, such was their moment to enter eternity, their suffering ‘meaning something’ in the grand scheme of God’s will, a meaning to be revealed only at the end of time, when the whole creation will be brought to perfection.

Thus we reach the limits of our understanding of the mystery of salvific suffering, stretching out towards the eternity to which we are all called after this transitory existence.  Life here is only a ‘penultimate good’, as John Paul would later state in Evangelium Vitae, not the ultimate good, which is eternal life.  That is why he could declare that all the heinous crimes against life, abortion, genocide, terrorism, mutilation, murder “do more harm to those who practise them than to those who suffer from the injury” (par. 3).  We should always keep in mind, whatever may come our way, good, bad or in-between, especially when we face our own death, to conform ourselves to Christ, recalling “that the sufferings of this present time are as nothing compared to the glory that is to be revealed to us” (Romans 8:18)

A blessed Triduum and Easter to all…