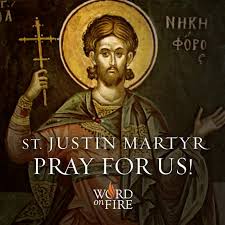 Wonder Woman has opened in theatres. I will have more to say on this feminist icon, and what it means for modern masculinity, or what’s left of it.  The film does seem to be garnering favorable reviews, even if philosophically subversive, or perhaps because so.  I wonder, if Hollywood just wants cash, for my thoughts have always been that it’s message is more subversive, which an article I will publish soon argues.

I also plan to pen something soon on artificial intelligence and what this means for human labour, work, employment, remuneration.  At least it had better be soon, before a computer beats me to it.

And a blessed memorial of Saint Justin Martyr to all, early, yes, martyr (put to death soon after the Apostolic age, in 150 A.D.), patron saint of apologists and defenders of the Faith, which this magazine tries to fulfill, however imperfectly.  But as Chesterton declared, if something is worth doing, it’s worth doing badly.  But we hope not too badly.