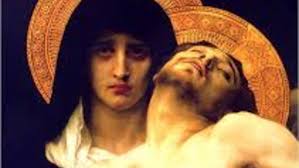 Our Lady of Sorrows is a fitting memorial at this time in the Church’s history which, to put things in rather banal terms, is interesting, during which times, as the Chinese proverb has it, one is fortunate to live. At the very least, it makes things, well, interesting.

One is not sure what to make of the Holy Father’s sermon the other day, on the ‘Accuser’ pointing out the ‘sins of bishops’, causing scandal and disturbance amongst the faithful. Hmm. I, along with many others, wonder to what, or to whom, the Pontiff is referring. ‘Satan’ in its Hebraic etymology simply means ‘the accuser’, but the Holy Father implies that the Evil One has human minions doing his bidding, namely, those who ‘accuse’ bishops.

One must ask: Is this always wrong? Presumably there are certain sins one is bound to point out, and others not. Publishing a prelate’s peccadiloes, tippling a bit too much at the parish corn roast, say, may well be scandalous and unfitting. No one wants to live under the gimlet eye of niggling ‘accusers’.

But what, as the cases before us imply, of a bishop’s more grievous violations of the moral law? Or his tolerance of such in his priests? Or his acquiescence in heresy in the catechetics, schools and universities in his diocese? Or his looking the other way, if not active participation in, grave liturgical abuse, which has led so many astray? How long can this go on? Who is going to accuse whom? As R.R. Reno painfully points out, we have lived through decades of complaisance, rife within the Church, even in the face of rather grave evil. All of us hoped that things would somehow, someway, get better. They may, but not after much suffering.

Jennifer Dewey, is a mother from out on the east coast of Canada, where the institutional Church is in rather rough shape, with plunging demographics, a dearth of priests and parishioners, the bitter fruit of the secularizing of culture and the many failed experiments in the heady post-Vatican II days. In her article, she points out the need for repentance, and that a large part of the solution is to pray and offer things up in solidarity, as members of the Mystical Body of Christ; for when one member suffers, we all do, and our merit can redound throughout the Church, as the vicarious suffering of Christ, Our Lady and all the saints well attests, the whole ‘triumph of the Cross’, Ave Crux, Spes Unica. She has her own way of doing this, amongst many others one may choose.

Yet more is needed, as Reno and many others make clear. We have to face not just the ‘abuse of minors and the vulnerable’, but plain old ‘immoral sex’ in all its vulgar varieties, especially amongst the clergy, and most of all the widespread tolerance of homosexuality amongst their now-circling ranks.

For this, we need to emphasize, and enforce, clearly and without compromise, the virtue of chastity, the ‘proper integration of sexuality within the person’, wherein the sexual appetite, powerful indeed, is ‘contained’ and directed towards its proper (and only) purpose: Either conjugal chastity, ordered to the unity of spouses and the procreation of children (never dissociated). Or, in those called to celibacy, to sublimate those sexual powers to other ends, prayer, study, works of charity, exercise, chaste friendships.

Are these paths difficult? Yes, in our current fallen state, and it is all-too-easy to give in to our passions, but this will eventually destroy us along with our society, and has already nearly done so.

But the path of chastity is also, in the longer term, the ‘easy yoke’ of which Christ speaks, for we are made to be chaste, united to one spouse, if one chooses marriage, or continent, if one remains single ‘for the Lord’ in whatever path.

Ultimately, human beings don’t need to ‘have sex’. As Christ says, we are all in the end destined to live as the ‘angels in heaven’, and it is always possible to begin living that life here and now, by the grace of God, along with a bit of human effort in taking up the cross that is given to us.

That is the message that needs to be proclaimed, here and now, and any prelates or clerics who deny this truth, who fail in a grievous way to live it out, who cause scandal and lead others astray, should be set straight, or removed forthwith if they prove contumacious in their error.

The soft, milquetoast complaisance has had its day and run its course. The institutional rot must be expunged, the truth made clear and lived out, with boldness and without compromise, as best we can in this vale of tears.

That, really, is the only solution.