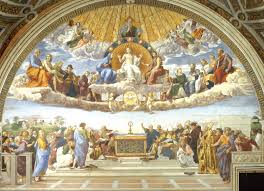 I have always been an emotional communicant, to this my family and parish priest can attest. The communion this Eucharist establishes is, of course, communion with Christ and each other, even those already in the glory of heaven. Therefore, it establishes us as a single body, one body, in Christ. While we today, too often, think of this in a metaphorical sense, the very radical understandings we find in St Paul (1 Cor. 12: 12-27) and Church Fathers such as St. Augustine (City of God, 10, 6) encourage us to think of it in more realist terms. For them every parishioner that came before and after us is one with us in the eternal Christ. If one of us is hungry this is no less “their problem” than it would be “my stomach’s problem” if I were hungry. If one of us is sick or grieving, we all are suffering, and all called to give support. The one Holy Spirit rests within each of us, forming us as one body in Christ with whom the Spirit is one. If this realization doesn’t make one emotional, I’m not sure what does.

This month, however, my family and I returned from our summer in Ireland to a changed environment in our Nova Scotian Archdiocese. The sexual abuse crisis in the Catholic Church had become a fully formed monster at a scale we never encountered. We deboarded in Halifax to face the immediate and overwhelming horror of the reports from the Pennsylvania grand jury, soon followed by the Archbishop Vigano testimony. The reports made us angry at those who betrayed Christ and the Church leaders who failed Him. Understandably, laity turned angrily toward clergy, bishops accused each other, and tears, scars, and wounds started to appear on the body of Christ. Anxiously, I awaited the following Sunday when I would be among my fellow parishioners listening to our priest’s homily on this topic. I walked alone to that Mass, not knowing what to expect but aware of the tumult of thoughts and emotions that tore me up. I took Communion stony faced for perhaps the first time since my conversion in 2004.

The following Sunday, I went again with my children and husband, but this time, during Communion, I asked Christ and the Holy Spirit to rekindle the familiar awareness of love, unity, and timelessness that joins me with my Church. I was met quickly with a strong and powerful urge to perform penance for the sins of Church leaders. I was met with an awareness that the oneness we form in Christ is not simply a oneness in the joys of peace and love, of charity and mutual support, it is a oneness with Christ in the Passion.

Our urge at this time has been to distance ourselves from each other, to blame and accuse. But, as one body, we laity also have a penitent role to play. The penance that seemed fitting to me was an offering, a financial contribution toward the settlements of sexual abuse cases. I propose this not to replace the massive reform needed or Bishops doing what is right and just. Rather, I am proposing this in addition to such reform. I am proposing it for our sake and for our relationships with God and with one another.

Christ dies in agony on the cross, the worst kind of death, for people (us, you and I) who don’t deserve it. There’s nothing “just”; it is a total act of self-surrender. Priests achieve degrees of Christoformity in their consecration, others in the prophetic acts; this act of financial self-sacrifice would allow the opportunity for the laity achieve a degree of Christoformity. It becomes for us not a “just” act, or a “fair” act, it’s an act of Christoform self-sacrifice, through which we, the laity, can become conformed to Christ. It is an act of martyrdom.

Precisely as a self-sacrifice in the form of injustice the laity can witness to outsiders. Tertullian said that the sand of the Coliseum is seed. That is, the acts of the martyrs showed the world the difference Christ made in people’s lives. This wasn’t “just” or “fair”. The beasts, as Ignatius claimed, “ground bones into bread” (Eucharistic). In the proposed offering the laity can show the world what relationship with Christ makes possible. This kind of offering, this act, illustrates to the world something different, it testifies. So as an act of martyrdom, an act of Christoform self-sacrifice, it may be spiritually significant. It allows us to witness to those outside the Church, and to witness to one another, rebinding us and making the Church evangelically viable. Pope Francis’ call for prayer and fasting are necessary, but I’m suggesting we interpret this prayer and fasting in a counter cultural, counter intuitive, radical, and Christlike way. Where the money goes is to the settlement of sexual abuse cases, unjust though that may be for laity, but what it does is give the opportunity for Christoformity, bearing witness, and martyrdom.

Understand, I love the Church, and in loving the Church I want it to recover and become well again. Members of the Church, including many leaders, have betrayed Christ. The Sacrament of Penance is the first step in recovering a right relationship between God and us. As such, while Penance is not the only solution to the crisis, it must be part of the solution, as we have sinned in one body, betrayed Christ in one body, and therefore we need to act towards the restoration of this relationship with God in one body. Part of our penitence must be in service of reparation toward the victims. It must be so precisely because of what the sacrifice evokes. To be a Christian is to be Christlike. Most of us have not committed sins and crimes against victims of sexual abuse, but, one with Christ in the Spirit, we are called to sacrifice like Christ, that is, to pay the price of others’ sins. Though, perhaps, this financial offering would not be a significant amount of money (when considering the scale of the settlements) the conversion we are called to requires “expression in visible signs, gestures and works of penance” (Catechism of the Catholic Church, 1430). Such sacrifices would test us, and force us to ask us ourselves – “Can we overcome the desire to rage against guilty clergy and cowardly bishops in fragmentation of Christ’s body, or can we sacrifice ourselves and our anger in order to become one with the Christ who suffers for the sins of others?”. At the very least, such sacrifices would enable us, through the operation of the Holy Spirit, to foretaste, however briefly, union with Christ who sacrifices to atone for sins he never knew. It would allow us to acknowledge the oneness of the Body of Christ. A oneness that we, at this time, are more ready than ever to deny, as we blame, and isolate and fragment.