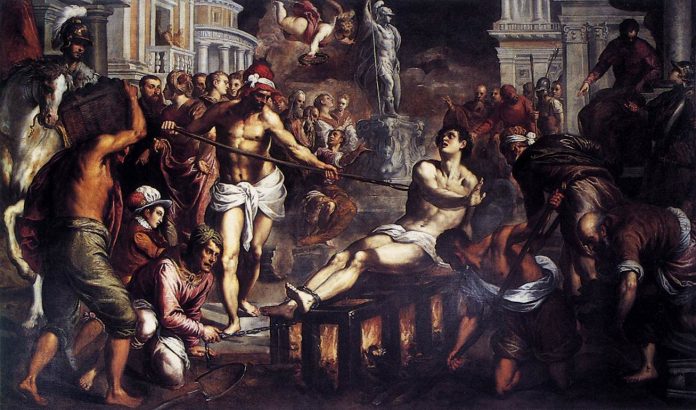 A blessed and joyful feast of Saint Lawrence to all, one of the very few non-Apostolic saints to be honoured with a full ‘feast’. A deacon under Pope Sixtus in 258 A.D., Lawrence was put to death a few days after his Pontiff suffered martyrdom.  One of his roles was distributing alms, and, hence, had guardianship over what wealth the church in Rome had in the mid-third century.  When the Prefect demanded this wealth, Lawrence hurriedly gave what he could away to the poor, then showed up at the appointed time, pointing to all these indigent as the true ‘treasure’ of the Church.

Needless to say, the Prefect was not impressed and, as tradition has it, had Lawrence slowly roasted to death on a gridiron, instead of the quick method of clean and efficient decapitation.  When Lawrence had suffered for some time, he joked with his executioners that he was ‘done on that side’, and could they perhaps turn him over?

Some claim that this is historically inaccurate, as the inscription for Lawrence, which claimed he was ‘assus est’ (which does not mean he was an ass, for all the Latin transliteralists out there) but rather that he was ‘burnt’, was missing the ‘p’, and originally said he ‘passus est‘, that he ‘suffered’ in the usual way, by having his head chopped off.

I am not so sure. The tradition of Lawrence’s is rather strong and deeply rooted in history, and I have prayed before the actual gridiron in Rome, or so I believe along with many others that it is.

One way or the other, Lawrence died happily for God, for the Church, for his faith, for his fellow Christians, and for all men. As the reading for his feast says, from Second Corinthians, ‘God loves a cheerful giver’, which in Greek is ‘hilarion‘.

There is an apocryphal saying of Saint Thomas that we may imbibe alcohol ‘to the point of hilarity’.  No one, as far as I know, has ever found the source, but it rings true.

Hilarity, or cheerfulness, is one of the primary signs of sanctity, of being at peace with God and with oneself, whether sipping (yes, not chugging, for fine wines, like all alcohol, must be tasted to be rightly enjoyed) a Merlot in the midst of friends, or, even and especially, in the midst of persecution and pain.

‘I will have no sad saints in my house’, said Father Philip Neri of Rome in the 16th century, and certainly sadness seemed far off from Lawrence of Rome of the third century.

So rejoice, said Saint Paul, and again I say, rejoice.  For if we take what God sends, and give what He asks, our reward will be great in heaven, brimming over, far beyond our imaginings.