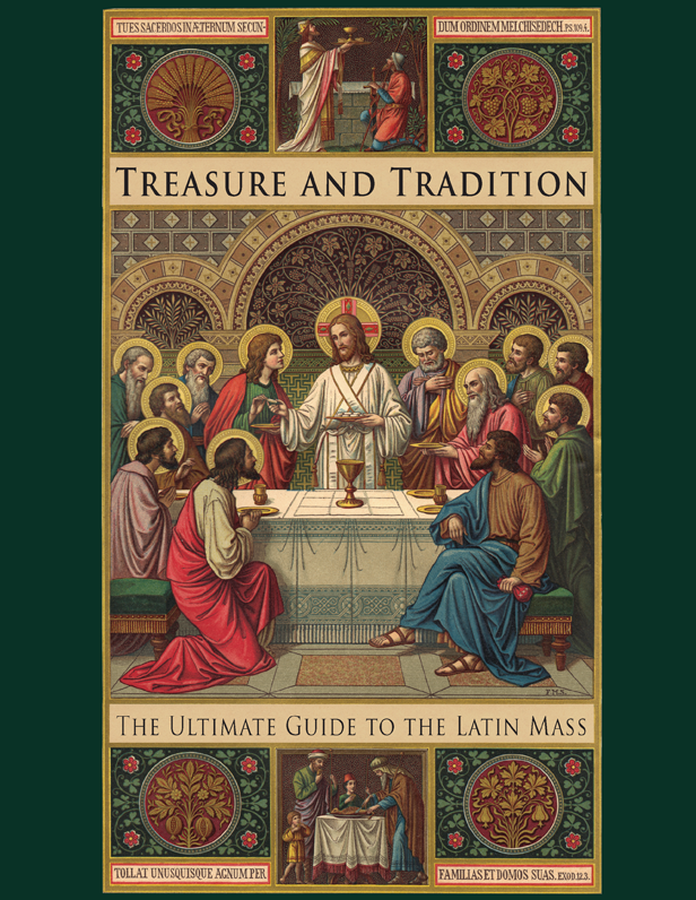 “This is not a ‘religious service’ or a scripture class; this is Heaven on Earth: it is where our God comes to us.”

The Extraordinary Form of the Mass or the Latin Mass is the Tridentine Mass. Promulgated by Pope Pius V in 1570, the Holy Mass was a reform of the Council of Trent in order to standardize a liturgy that had become influenced by local traditions, as well as to protect against the introduction of Protestant errors. Fast forward to today where the Novus Ordo Mass suffers in too many parishes from the curse of the ego, Protestant influence, individual interpretation, the subtle and not so subtle insertion of heretical ideas, and no one should be surprised at the growing interest in the Tridentine Mass.

Since the Extraordinary Form Mass is vastly different from what faithful Catholics have experienced since the 1960’s, Treasure and Tradition, in parts a Missal and reference book on everything associated with the Tridentine Mass, is invaluable to the neophyte Latin Mass participant as well as to the experienced Latin Mass attendee who wants to deepen his understanding of Holy Mass. Filled with beautiful illustrations, helpful diagrams, photographs and straightforward explanations, the book is divided into three parts.

The first part is an explanation of what Holy Mass is, including the objects used in the Mass: the sacred vessels, priestly vestments, the altar and other furniture. There is also an explanation of the various Sacred Ministers and their roles.

The second section is a Missal that can be used during the Tridentine Mass. As with other Latin Mass Missals, the English translation is included alongside the Latin text. Photographs and diagrams serve as  useful cues to help us follow the Mass. Unique to the Missal is the addition of “notes explaining the prayers and actions of the Mass” as well as an “exploration of the themes and history of the Mass.”

The third part is the Appendix. Contained in this section is an overview of the Divine Office, a short history of the Bible and a glossary of terms and concepts. This section ends with concise instructions for making a good confession and preparation for worthy reception of Holy Communion.

Losing one’s place during the Latin Mass proceedings is understandable since most of the Tridentine Mass is offered in silence and in a language that most of us do not know. As a further help, there is a chart on the front and back covers that guides us using prompts, such as the volume of the priest’s voice, his location, the actions of the ministers involved and other cues.

This is a beautiful book, a feast for the eyes and the soul. My only issue is that the size of the book (22cm x 29 cm x 1.5 cm or 8.5” x 11.5” x 0.25”) may be cumbersome for some to use at Mass. However, this is a minor concern. This is a good instructional book that even children can utilize during Latin Mass with the help of their parents. Treasure and Tradition is a beneficial reference book on sacred liturgy as it contains a wealth of information that uncovers the richness of this most extraordinary gift from God, this Heaven on Earth, the Tridentine Mass.