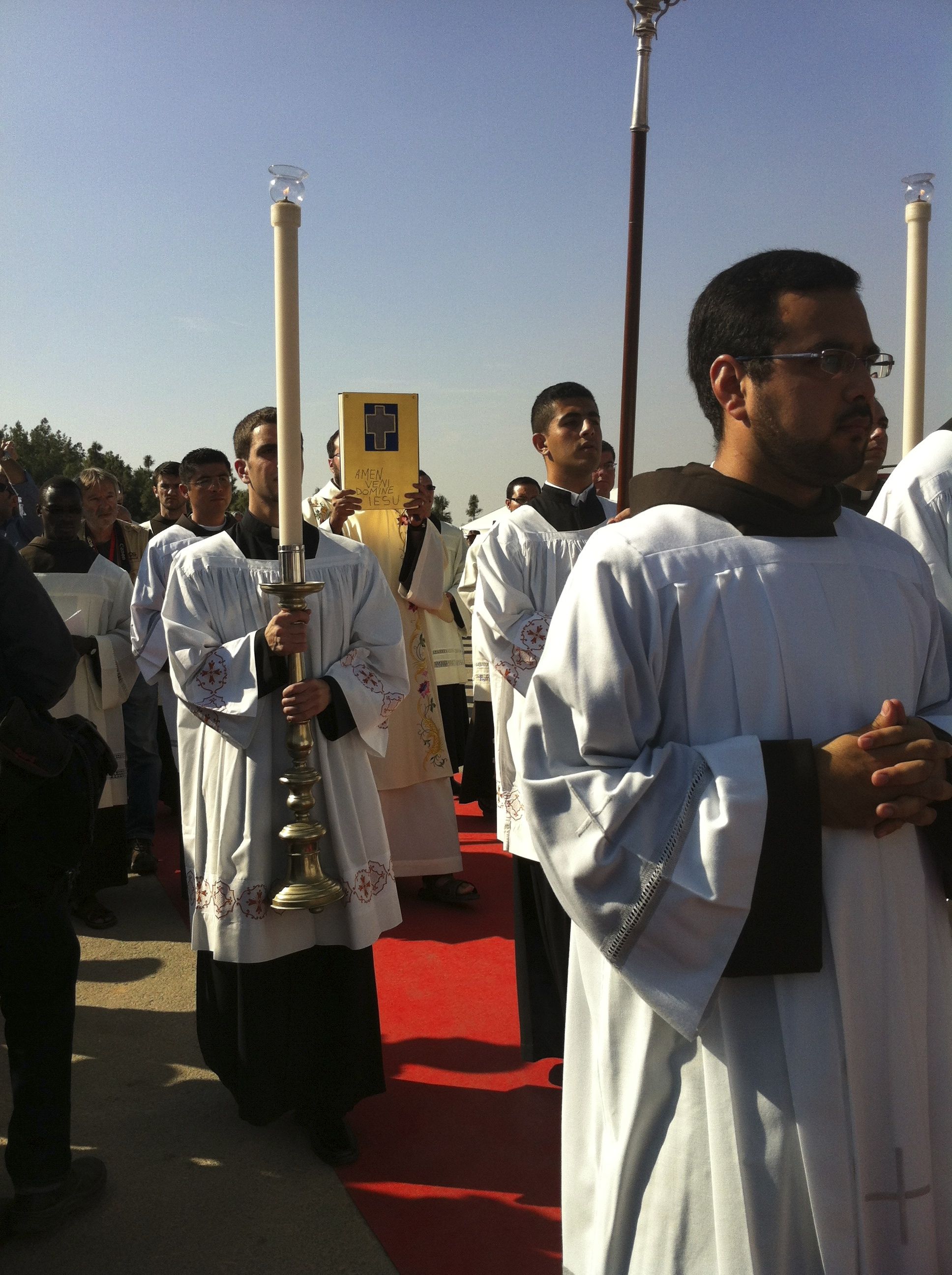 On Sunday, 17 November, over six thousand pilgrims attended the International Day of Faith in Nazareth, a collaboration of the Israel Ministry of Tourism and the Italian Bishops’ Conference, to celebrate the close of the Year of Faith. Pope Benedict announced the year on 11 October 2012, the twentieth anniversary of the publication of the Catechism of the Catholic Church, as an “opportunity to usher the whole Church into a time of particular reflection and rediscovery of the faith” (Porta Fidei).

The Day of Faith began with spirited musical performances from local choirs followed by a Mass officiated by the Latin Patriarch of Jerusalem, Archbishop Fouad Twal, and accompanied by a Gregorian choir. In his homily, the patriarch emphasized the pre- eminence of faith, drawing examples from the Old and New Testaments: Abraham “answered the call of God and ventured to walk with God without any guarantees, with absolute confidence and full surrender, without fear or hesitation.” Mary “accepted the Word of God in her immaculate womb.”

Like Abraham and Mary, we are meant not only to have faith but to live faith. This is a challenge in a world where it is no longer safe to assume that everyone possesses the same basic morality, where a commitment to faith means going against social, cultural, and political trends, where it is easier to deny or hide your faith than stick your neck out. In his explanation for the Year of Faith, Benedict XVI wrote that faith is no longer “a self-evident presupposition for life in society”:

Whereas in the past it was possible to recognize a unitary cultural matrix, broadly accepted in its appeal to the content of the faith and the values inspired by it, today this no longer seems to be the case in large swathes of society, because of a profound crisis of faith that has affected many people. (Porta Fidei)

The Mass was held on Mount Precipice, where a crisis of faith occurred two thousand years ago when the people of Nazareth rejected Jesus and attempted to throw him from the cliff.

He came to Nazareth, where he had grown up, and went according to his custom into the synagogue on the Sabbath day. … And he said, ‘Amen, I say to you, no prophet is accepted in his own native place.’ … When the people in the synagogue heard this, they were all filled with fury. They rose up, drove him out of the town, and led him to the brow of the hill on which their town had been built, to hurl him down headlong. But he passed through the midst of them and went away. (Lk 4:16, 24, 28-30)

The story is particularly relevant in Israel, a land surrounded by its enemies. The people of Israel cannot do as Christ in this biblical passage and disappear; they must face conflict. Tzvi Lotan, the Ministry of Tourism Attaché in Italy, said, “This is not an easy country. We are in a kind of continuous conflict, ups and downs.” But, for now, there is a period of quiet. “It’s very good. Silence. Nothing has happened. It’s the best thing we can have till we can get real peace.”

In a press conference after the Mass, the Patriarch explained that Israelis “have less credibility in the speech of politicians. We hope more in God’s love and God’s mercy to give us peace and justice, to give peace to all the Middle East.”

In Israel, where people of different—and sometimes opposing—cultures and faiths live side by side, peace is an active virtue where one constantly puts one’s faith in others. Tourists and pilgrims, over three million of whom visit each year, have a special role to play in this peace. “We need the tourists and especially the pilgrims to make with us, Palestinians and Israelis together, a bridge of peace,” said Tzvi Lotan. “The pilgrims bring us closer, one to the other. It is very important to us, the sense of having a big number of tourists, especially pilgrims, here in the Holy Land.”

Minister of Tourism Uzi Landau echoed these sentiments: “We are here at [Mount Precipice], providing the proper conditions, and we wish to see many of the faithful come here in the future. We see also that this is one of the many activities that will set up a bridge between peoples, between religions, between different languages, between different ethnic groups. That, here in the Middle East, will be one of the important contributors to future peace.”

Pope Francis gave his blessing on the International Day of Peace through a special letter to the Patriarch (read the letter in its entirety in The Pope Speaks, p. 30), highlighting the importance of Israel in the lives of the faithful:

The history of our faith finds its origins in the very land where you celebrate. Before we can understand our own personal history of faith and our need for God’s mercy, we must all turn to that place and time when Jesus himself walked among us. For it was there that the Lord Jesus took on our human nature and revealed God to us. It was there that he taught his Apostles and disciples and that he experienced the joys and sufferings, the blessings and difficulties, of human life and love. And it was there that he gave to us the gift of his Passion, Death, and Resurrection and assurance of eternal life. (Letter to His Beatitude Fouad Twal, Latin Patriarch of Jerusalem)

If the Year of Faith taught us to know what we believe, there is still a lesson to be learned—a lesson emphasized by Pope Francis in his homily on the closing of the Year of Faith and demonstrated by the faithful in Israel. It is, again, to live our faith: to proclaim the Gospel in our families, our communities, and the world. The blessing Francis sent to Israel and the Eastern Catholic Church was “above all a sign of the appreciation of the Bishop of Rome for these communities which have confessed the name of Christ with exemplary faithfulness, often at a high price” (Homily of Pope Francis, 24 November 2013).

Francis echoed the words of his predecessor, who said, “The renewal of the Church is also achieved through the witness offered by the lives of believers: by their very existence in the world, Christians are called to radiate the word of truth that the Lord Jesus has left us” (Porta Fidei).

The Year of Faith has been a time of preparation. Now we are called to action. As the Patriarch wryly concluded his press conference remarks, “This is the end of the Year of Faith; I hope it is not the end of our faith.”

Apostolic Letter of the Supreme Pontiff Benedict XVI for the Indication of the Year of Faith, Motu Proprio Data: Porta Fidei, 11 October 2011.

Homily of Patriarch Fouad Twal at the Internation Day of Faith in Nazareth, 17 November 2013.

Homily of Pope Francis on the Conclusion of the Year of Faith on the Solemnity of Our Lord Jesus Christ, King of the Universe, 24 November 2013.

Letter from Pope Francis on the International Day of Faith in Nazareth, 8 November 2013.

Special thanks to the Israel Ministry of Tourism for sending Catholic Insight to Israel to cover this event.