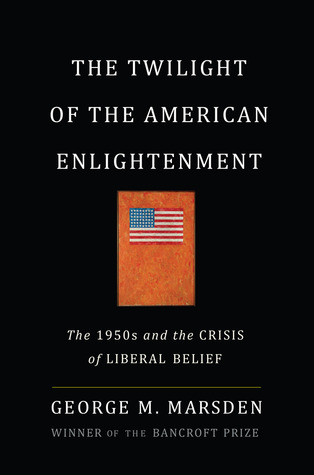 The average age of North Americans is forty-one; this means that most people have no personal recollection of the decade of the 1950s, the focus of George Marsden’s fascinating and accessible book.

Marsden, an historian at Notre Dame University, focuses on a time of promise and anxiety; a time of new technologies, a pervasive emphasis on the relatively new social science of psychology, and a reliance on expertise in fields of life formerly governed by common sense and experience.

The fifties was also the decade when television made its ominous appearance, spawning a mass culture that was (simultaneously) portrayed as liberating and threatening. It was also the last decade in which churches were influential in public life and relatively full; in 1960 seven out of ten Americans attended church on Sunday. Catholics still struggled for acceptance, and the public square was dominated by the assumptions of liberal Protestantism.

In the spring of 1960 Life magazine, with twenty-five million readers, published a five-part series on what was wrong with America. Contributors included Walter Lippmann, Billy Graham, the poet Archibald MacLeish, and two-time presidential nominee Adlai Stevenson. The series attempted to define a “national purpose” for a country that increasingly dominated the world stage but was riven by self-doubt.

Marsden goes on to examine the writings of such public intellectuals as Hannah Arendt, Erich Fromm, David Riesman, Vance Packard, B. F. Skinner, Dr. Benjamin Spock, Reinhold Niebuhr, and others. Many of these people are largely forgotten today, but their influence (and it was quite often malign) in some cases survives. Marsden traces how such intellectuals searched for a way to build a culture that would be based on principles like openness, equality, reason, and individual autonomy. What most of them did not reckon with was the degree to which there was no longer any comprehensive vision or, even more important, accepted source of authority.

Although Communism was called (by Arthur Koestler) “the god that failed” so, too, the secular American dream failed—or at least faded; an ever-expanding Gross National Product proved a less than exalted objective for a country. As Adlai Stevenson put it, “With the supermarket as our temple and the singing commercial as our litany, are we likely to fire the world with an irresistible vision of America’s exalted purposes and inspiring way of life?”

The increasing fragmentation of what passed for American “culture” accelerated through the 1960s and 70s (particularly after the Supreme Court decision in Roe v. Wade in 1973) and the preoccupation of intellectuals gradually turned to the culture wars and the rise of the religious right, all documented by Marsden.

Through six chapters, Marsden chronicles a time of intellectual and social foment; then, in the final chapter (called “Toward a more inclusive pluralism”) he examines the works of the Dutch theologian Abraham Kuyper and suggests that these provide a way forward. I did not find this last chapter at all persuasive; nevertheless, Marsden has written an elegant and compelling account of how the high hopes of 1950s liberalism flickered and died.