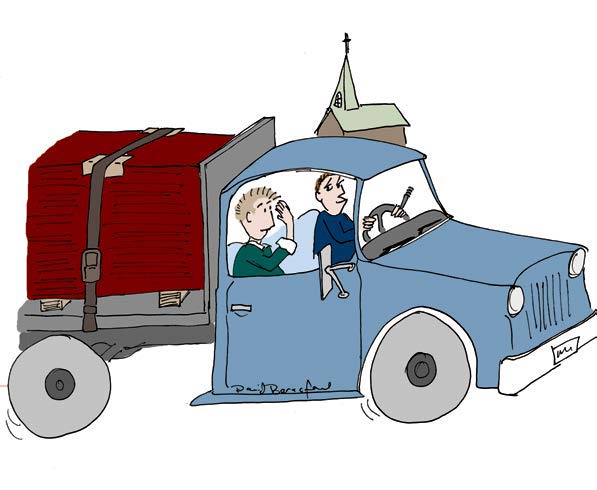 I used to work at a brickyard while I was going through school and when I was first married. It was an amazing place, which seemed to employ more than its share of eccentrics. I must have seemed like an eccentric myself to my fellow employees. One guy I worked with was Paul McFarlane—Dippy Paul as he was known. Paul used to run long-distance marathons to raise money for various charities, and he did a twenty-five-mile route so often that it became unremarkable. So to up the stakes, Paul ran from Ottawa to Peterborough, 180 miles. Nobody was sure of the route he took for he disappeared just outside of the town limits and reappeared again four days later, running up the main street back to town. Paul was a chain smoker, and he used to burn his hands as he tried to light a cigarette, forgetting that he had one in his mouth already.

His stepfather, George, had a life-time job guaranteed at this brickyard. He told the owner about a plan to start a union about thirty years before I knew him. This allowed the boss to “sack all the Commies” as George put it. George used to fill up the gas tanks of the lift trucks by siphoning gas out of the big delivery trucks with a length of rubber hose. He would hold his cigar on one side of his mouth and suck up the gas with the hose on the other side of his mouth. This daily occurrence was always a crowd pleaser. We would stop what we were doing to see if George would blow up—he never did, and he retired ten years ago, still in one piece.

George had other sons who were variously related, one of whom had a distinct aversion to soap and water. Occasionally I used to ride in the truck with him to different job sites. There was a presence about this man, an atmosphere that you could never get upwind of. The amount of flies that surrounded him were a marvel to me.

The working philosophy of this establishment was that there was no point in wearing out the lift truck if you could carry something by hand. We would load up to 4,000 bricks by hand onto the back of the trucks. Slack periods during the day were spent shoveling coal into burlap sacks for the expected, but never realized, autumn rush of coal deliveries: “Grab your shovel, Davy, we want to have lots of coal bagged up before the orders pour in.”

I was a helper on the delivery truck for a giant of a man who, on his own admission, stole “anything that was not nailed down,” which was only an honest statement of fact as opposed to braggadocio. Whenever our route took us past a Catholic church, I made the sign of the cross, being a Catholic. He asked me about this, and I explained that this is what we Catholics do whenever we pass a Catholic church. He said nothing more about it, and I settled down to my job, making the sign of the cross as the occasion demanded.

As the week progressed, I noticed that we seemed to be passing more and more churches in our rounds. Sometimes we passed the same church three or four times on the way to a job site. I assumed that Bob (for this was the honest giant’s name) was not good with directions. By Thursday, we were driving past every Catholic church in town on the way to and from each job. I asked Bob why we went to each delivery in such a round-about way.

He burst out laughing so hard that he had to pull over to the side of the road. It was a full ten minutes before he became coherent. Between sobs and sputters, I pieced together the fact that he was seeing how many times he could get me to make the sign of the cross on a single trip. It was now my turn to laugh, and the two of us were utterly helpless for the balance of the morning, as we would first one, then the other, crack up.

Bob asked me why I wasn’t cross, and he was genuinely surprised that I wasn’t. I tried to explain as best I could, for Bob was not a Catholic, that the reason I was not angry was because it was funny.