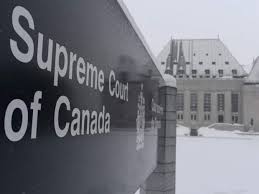 The story of euthanasia in Canada officially began a year ago this February 6th, when the Supreme Court of Canada decreed that the laws forbidding murder-suicide for compassionate reasons were ‘unconstitutional’, and commanded the Parliament of Canada to frame a law legalizing such physician-assisted suicide within a few months, so the clock is ticking for our country to enter a whole new phase in the culture of death, when our physicians will become murderers.  Primum non nocere?

Now, for all of you constitutionally-minded readers out there, this should give you pause. How can nine unelected individuals, appointed for life in the judicial branch of government, command the 308 members of the duly-elected legislative branch, along with the 105 Senators, to write any law?  Is not the task of the judiciary, as Saint Thomas states, simply to judge whether and how a law has been broken?  Whatever happened to the rule of law, wherein one sphere of authority was supposed to balance the others, preventing such attempts to legalize evil and insanity?

Ah, but the judges derive their authority from the Carter of Rights and Freedoms here in Canada, a vague, milquetoast document promulgated under the dismantler of just-about-all that was great about this country, Pierre Elliot Trudeau, in 1982, whose son now sits in the same seat as his father.  This Charter functions as our constitution, and its very ambiguity is a source of all sorts of evils.

The Supreme Court, in a case involving two women with debilitating illnesses who sought aid-in-dying, ‘discovered’ in February of last year that section 7 of this Charter, which states that everyone has a right to ‘life, liberty and security of the person’, was violated by forbidding people the ‘liberty’ to end their lives when and how they saw fit.  Their reasoning was thus:  People in ‘intolerable’ pain had only two choices:  Kill themselves by what are often violent and uncertain means, or to endure this suffering unto a miserable death.  This choice was cruel and inhuman.

This dilemma, of course, is a logical conclusion of a culture which sees suffering as pointless, and it is the question of suffering that is at the heart of the euthanasia debate.  If existence ends with bodily death, why suffer?  Even amongst many Christians, sin no longer matters, there is no need for expiation and spiritual growth, quaint concepts only found in mediaeval works of piety.  Even amongst the spiritually grounded, who still believe in an afterlife, the notion of a post-death ‘judgement’ is repugnant, not in accord with the all-merciful and all-forgiving God.  The pernicious fog of universalism is also in the air:  We are all going to a soft, mellow heaven, and what we do in this life matters little, if at all.  So, once again, why suffer?

Canada is in the grip of a deep existential malaise, waist-deep in the culture of death of which Pope John Paul warned, a culture which gives rise to these kinds of laws.  Our loss of the ‘sense of suffering’ follows upon, to paraphrase Pius XII’s warning half a century ago, our of the sense of sin and its consequences.  This link amongst sin, suffering and our eternal destiny is spelled out most clearly in a masterful work by Pope Saint John Paul II, Salvifici Doloris, which he promulgated on the feast of Our Lady of Lourdes (patroness of the sick) in 1984.  Man suffers, he says, both as a punishment and as a remedy for sin.  Nothing so cures us, if we allow it, of the deadly effects of our evil: selfishness, greed, self-absorption, and it is suffering which most effectively brings about spiritual maturity, making us apt for heaven.

More mysteriously, even in those most perfect, Christ, Our Lady, the saints, who have no need of the remedial effects of suffering, can in a mysterious way through our connection in Christ’s Mystical Body atone and expiate for the sins of others.

To say the least, this is a long way from the current mindset of the Canadian legislature, who are no longer even pretending that Canada is still founded on such Christian principles.  On the day I write, the readings had the prophet Jeremiah lament:

This is the nation that did not obey the voice of the Lord their God, and did not accept discipline; truth has perished; it is cut off from their lips.

Most Canadians now see only the truths they want to see, or are taught to see in their State-controlled education, limited sadly by and large to the horizons of this world and this life.  There are some who still believe in the truths of our faith, that suffering is a great good if used well, and that murder and suicide are grave evils which, if done with full knowledge and consent, bar one from heaven and create a ‘hell’ in which one will live for eternity.  Although we cannot judge any particular individual, the objective truth stands as a warning.  The Archbishop of Ottawa, our capital city, has forbidden his priests to offer the last rites to those about to have themselves voluntarily killed.

Our judges, politicians and university ‘educated’ elites who will help pass the proposed euthanasia bill into law, their conscience still dimly-burning, retain some glimmer that that murder and suicide are at least unpleasant, and must be contained within proper safeguards.  A mere glance through the recommendations to Parliament demonstrate how flimsy such constraints will be, and the gates of this hellish business are already mostly wide open before we even begin.  The whole macabre document should be read, but here are some highlights:

However, two physicians will have to sign the consent form.  As happened with the original legalization of abortion here in 1969, once murder-suicide is accepted as a legal right, the ‘two doctor’ rule will be seen as an unjust burden, and struck down.

Such assistance in dying must, as the document states, “be available to individuals with terminal and non-terminal grievous and irremediable medical conditions that cause enduring suffering that is intolerable to the individual in the circumstances of his or her condition”.  In other words, the conditions are completely subjective.  Whatever the patient deems he cannot tolerate in his own circumstances is by definition intolerable, and this includes non-life-threatening psychiatric conditions.

Physicians, even if they refuse to participate in murder, will have to refer their suicidally-minded patients to someone who will kill them.  So much for freedom of conscience.  Have these lawmakers never heard of formal cooperation? Every one of our physicians will be turned into a potential murderer.

Advanced directives will also be permitted, planning your own death while compos mentis “before the suffering becomes intolerable”, in the event that you become too non-compos mentis to request death. There is not too much said about backing out if you change your mind part way along.

Perhaps most grievous, assisted suicide will also be available eventually to ‘mature minors’.  After all, how can we watch the young and vulnerable suffer, and have they not as much right to be released therefrom?

All of this, of course, will be publicly funded by taxpayers as part of the great common good of Canada and its all-encompassng medicare, permitting physicians, and other ‘medical personnel’, to kill their own patients.  The days of the headsman are back, albeit, as Chesterton predicted, in a more antiseptic and bureaucratic form.

The problem is that once this Destroyer is let loose upon the world, there is no holding it back, as the German people discovered when their own National Socialist government legalized doctor-assisted death in the 1930’s.  The only safeguard is the absolute prohibition of murder and suicide as objective evils, forbidden by God, and proscribed in no uncertain terms.   Once again, the words of the great John Paul II, this time from his 1993 encyclical Veritatis Splendor:

If one does not acknowledge transcendent truth, then the force of power takes over, and each person tends to make full use of the means at his disposal in order to impose his own interests or his own opinion, with no regard for the rights of others… Thus, the root of modern totalitarianism is to be found in the denial of the transcendent dignity of the human person who, as the visible image of the invisible God, is therefore by his very nature the subject of rights which no one may violate no individual, group, class, nation or State.

We are on the verge of just such a totalitarianism in Canada.  Although a society may tolerate a lot of evil (Veritatis Splendor, 81), once it enshrines intrinsic, objective evil into positive law, the very foundations of that society are undermined (Evangelium Vitae, 70) and, we may presume, it cannot long survive.  Canada already has completely unrestricted abortion, and in the past decade has legalized in-vitro fertilization and homosexual ‘marriage’.  We are now on the verge of legalizing murder-suicide, prostitution and recreational drugs, all under a Prime Minister and his Cabinet with a deplorably skewed moral agenda.

Need I state that at this point, our primary hope is in God.  At our college here in Barry’s Bay, we make an annual pilgrimage to Martrys’ Shrine each March, trudging through the snow to the sites commemorating the early Jesuits and their converts who shed their blood for this land at its very origins in the mid-17th century.  Every year, our primary intentions are for Canada, that we may come back to our senses before it is too late, and this year, our prayers are more urgent more than ever.