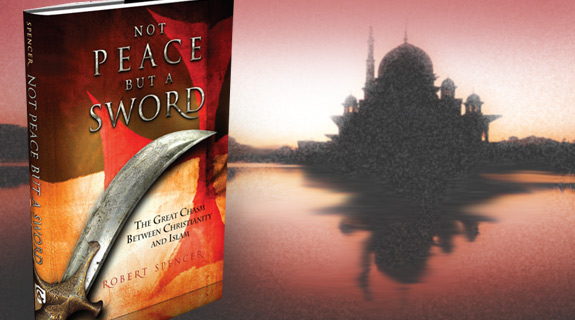 Robert Spencer, Not Peace but a Sword: The Great Chasm Between Christianity and Islam. San Diego: Catholic Answers, 2013, p.251.

Robert Spencer is perhaps the most vocal Catholic critic of Islam and violent jihadism. He has authored various works critical of both Islam and the prophet Muhammad. He is also the founder and editor of JihadWatch.org. Despite the many efforts made to discredit him, he unflinchingly continues to expose the Islamic beliefs that threaten Western culture.

In this book, Spencer explores how Muslims not only understand their own faith, but the Christian faith as well, and how these understandings influence their attitudes towards Christians. He examines in particular the profound differences between Muslim and Catholic beliefs regarding God, Christ, justice, and morality.

In the first chapter, Spencer examines whether a sincere dialogue is feasible between Catholics and Muslims. He notes that, in the context of “ecumenical jihad”, jihad is taken to mean merely struggle, as opposed to warfare. Yet the latter is the most common meaning of the word jihad in the Qur’an.

More specifically, Spencer writes about the violent manifestations of jihad, which have resulted in tens of thousands of modern-day Christians being driven out of their lands or simply killed. He notes in particular how “human rights organizations give only perfunctory recognition to such outrages”. These atrocities are part and parcel of a tradition going back to the prophet Mohammad, who “himself made war against Christians” and whose jihadist successors “conquered and islamized the Christian lands of the Middle East, North Africa, and Spain” in the 7th and 8th centuries.

Spencer goes on to discuss how the penalty for apostasy is deeply embedded into Islamic culture. Again, this is something that Muhammad himself commanded through the hadith Sahih al-Bukhari: “Whoever changed his Islamic religion, then kill him.”

In chapters three and four, Spencer discusses the significant differences between the Christian and Islamic conceptions of God and Christ. As portrayed in the Qur’an, Allah is not a father, and most certainly not the father of Jesus Christ. The Qur’an rejects the idea that God could be a divine father: “It is not for God to take a son unto Him. Glory be to Him! When He decrees a thing, He but says to it ‘Be,’ and it is” (19:35). The Qur’an goes further to indicate that Allah cannot have a son because this would imply that he has a wife: “The Creator of the heavens and the earth – how should He have a son, seeing that He has no consort, and He created all things, and He has knowledge of everything?” (6:101). Christians are warned to desist from saying that there are three divine Persons.

Even Jesus’ name is the object of major differences between Christians and Muslims. The latter refer to Jesus as Isa, which has a close resemblance to the name Esau. Christians who speak Arabic refer to Jesus as Yasua, which is similar to the Hebrew Yeshua or Joshua. Although the Qur’an affirms the virgin birth and many of the miracles of Christ, it repeatedly denies that Jesus is the son of God. The Qur’an keeps repeating that Allah does not have a son (2:116; 10:68; 18:4; 19:35; 43:81). Moreover, it denies one of the best attested historical facts of antiquity, that of the crucifixion of Christ (4:157). Spencer goes on to explain that, in Islamic theology, Jesus will wage war against Christianity at the end of times. He provides a quotation from the hadith Sahih al-Bukhari: “The Hour will not be established until the son of Mary [Jesus] descends amongst you as a just ruler, he will break the cross, kill the pigs, and abolish the Jizya tax. Money will be in abundance so that nobody will accept it [as charitable gifts].”

Turning to issues of justice, Spencer argues that there are no moral absolutes in Islam. For example, a true Muslim should not honour his father and mother if they are infidels. In the words of the Qur’an: “O believers, fight the unbelievers who are near to you; and let them find in you a harshness; and know that God is with the godfearing” (9:123). Also, taking “booty” in warfare against unbelievers is permissible (8:41). And infidels living in Muslim societies are to pay a tax or tribute (jizya) that does not apply to non-Muslims (9:29). Although the tax was abolished in 1856 within the Ottoman Empire, it “remains part of Islamic law as all eight of the schools of Islamic jurisprudence teach it.” This being said, there have been in recent years suggestions to reinstate the jizya in Iraq and Egypt.

In the final chapter, Spencer asks whether Muslims are generally interested in what he calls “an honest desire for dialogue?” He responds in the negative, explaining that most past attempts at advancing dialogue between Muslims and Christians have failed:

Such sessions often include a Muslim speaker downplaying the reality of jihad activity and Muslim persecution of Christians, and offering his Christian audience bland assurances that such things have nothing to do with authentic Islam…all of these attempts at “dialogue” share several common characteristics, including most notably a downplaying and glossing-over of the differences between Christianity and Islam, an over-emphasis on the similarities between the two religions, and a call to Christians to abandon or modify certain of their core beliefs, while never budging an inch of on Islamic doctrines.

The root of Muslim resistance to genuine dialogue lies in the Qur’an’s prescriptions against Christians, which are generally viewed as despicable people:

[The Qur’an] teaches its followers to regard non-Muslims – especially those among the “People of the Book” who have rejected Muhammad, the Qur’an, and Islam – as the “worst of creatures” (Qur’an 98:6). They have no compelling interest to have good relations with them except so as to protect Muslim communities in non-Muslim countries. The Islamic imperative remains to make them Muslim or else make them “pay tribute out of hand” and be “humbled” (Qur’an 9:29).

Readers will also find of interest the epilogue which includes a debate between Peter Kreeft and Spencer, titled: “Is the Only Good Muslims a Bad Muslim?” Readers can decide for themselves which of the two has the better arguments.

Amidst the rise of ISIS and other militant Islamic groups who have been incessantly persecuting Christians throughout Africa, Asia and the Middle East, Not Peace but a Sword offers a most relevant message. Its greatest merit is that it will help Christians confront the popular yet pernicious belief that Islam is a religion of peace. While there certainly are many Muslims who seek to live in peace with non-Muslims, they do so not out of respect for their own religious tradition, but in spite of it.