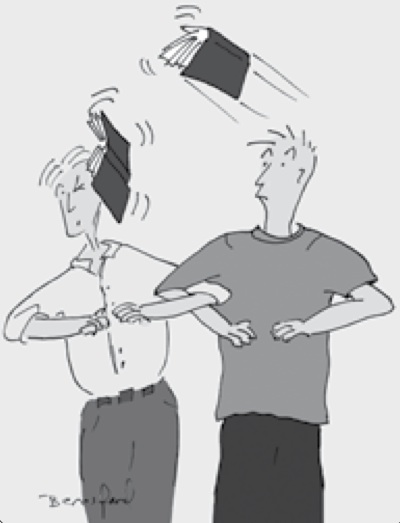 “Why does each small thing in the world have to fight against the world itself? … So that each thing that obeys law may have the glory and isolation of the anarchist.” – G. K. Chesterton, The Man Who Was Thursday

Twenty-five years ago I attended teachers’ college after finishing an undergraduate degree. One of our courses was Teaching High School Science, in which we learned how to explain the DNA molecule, competition and survival of the fittest, carrying capacity, the usual biological stuff. Our professor was a kind, soft-spoken fellow. He believed that a new world order was emerging in which all human society would be based on reason, and that religious superstition would dissapear—a kind of Age of Aquarius. This new world was going to come about through the actions of self-interest and Darwinian struggle. In his new world, all human suffering would disappear because self-interest would produce community co-operation. In this happy future, everyone would share their goods for the benefit of all—a secular monastic paradise.

Based on his theories, he had invented a class exercise or game that used role playing and he taught us his new game. The idea was that we would become agents of change in the public schools, missionaries of co-operation in the classrooms of the world, and bring about a utopia that had advanced beyond the need for rules.

We were broken up into groups of five, and each group was assigned to play the role of a separate nation. Each group was given a random allotment of resources that we drew from a hat. Our group (the Blues) received two cards, saying Surplus Capital and The Ability to Extend Credit, but we did not get any of the Natural Resources cards. The other groups had combinations of things such as Large Populations of Manual Labour, or Vast Reserves of Natural Resources, but with no Surplus Capital develop them.

He told us that the only objective for each team was to win, and winning meant producing a stable economy. To do this we were to spend the next three hours mingling and visiting all the other groups and make agreements with them. This process would produce a kind of interconnected classroom economy in which everyone would benefit only if we all cooperated. The game was rigged so that any group that closed its borders would lose.

Me, being a dogmatist, asked my professor what the rules of the game were.

“Rules? Why, there are no rules! That is what has caused all the trouble in the world already, the suffocating use of rules born of superstition! We are going to sweep away the old order with its need for rules. When you play this game, you will discover that you do not need any rules at all except Darwin’s rule of survival of the fittest!” he said in rapturous glee.

And so we began. Each of us scattered to find out what the other groups had, and then our team gathered for a little conference.

“Here’s is an idea,” I suggested. “First, he said no rules, so let’s take him up on this—no rules. It is 9:54 now. Each of us goes to a different table. Then with a big smile we hold out our right hand and…”

At 10 o’clock, we struck. Each of us grabbed all the resource cards from the top of the other groups’ tables and then raced to the professor’s desk, put the cards in his top drawer and then linked arms for the onslaught that we expected. It took a minute or so for the other teams to grasp what had just happened; but when they did, they got it—good.

There was a yell, and a charge, and then we were all being shoved over tables and chairs. The other groups kept attacking but we held firm with arms linked together. Lunch food and notebooks went flying at us through the air. Some students, not knowing what else to do, hid under their desks. Others just kept walking around saying over and over that it was unfair.

At first, the professor was speechless.

His religion had abandoned him. His god had died.

I like to think that my professor had learned that some rules should never be taken down. But I can’t say for sure; he never spoke to me after that.