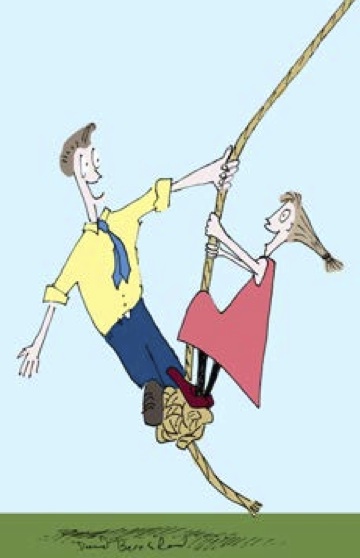 Nobody knew where the rope came from. One Sunday morning after Mass in early spring, we found a thick rope hanging from an old elm tree in the front lawn of the church. Soon all the children were taking turns swinging from it. One of the dads, the father of a four-year-old, tied knots in the rope so that the little ones could get a better grip for the game—trying to swing out the farthest.

The kids swinging on the front lawn of the church caused the parents to linger and chat each week and invite each other to brunch after Mass. Children who were new to the parish were introduced to the altar boys at the rope swing, and the boys soon joined these lads on the altar. The girls mucked in as well at the swing, falling and laughing in the grass, getting their dresses dirty, and the new girls were soon added to the growing choir. Hymns which had been sung by about three adults in heroic but halting voices were now being sung by a burgeoning choir of young girls and young women. We had the best choir in the diocese. Olds songs, those made for four-part harmonies, began to appear in the repertoire. By the beginning of summer the altar was filled with boys and the choir loft was packed with young women.

Other changes occurred. At first only a couple of girls wore dresses to Mass, then all followed suit, and slacks in the choir loft disappeared. Anyone under the age of thirty who came to mMass in jeans looked out of place. The altar boys, not to be outdone, started wearing ties to Mass. I am still amazed at this—I, whose wardrobe consists of five checked flannel shirts: my own sons insisted on wearing white shirts, ties, and jackets to Mass.

News travelled and soon more home-schooled families came to our parish: we had a reputation as the parish where children were welcomed at Mass and babies seemed to appear miraculously amongst us in the pews. Young mothers nursed through the sermon, and each Sunday Mass was accompanied by crying, the welcome sound of a parish that once more was alive. Friday Exposition of the Blessed Sacrament and Benediction was started. One wonderful woman took it upon herself to start a parish library with books borrowed on the honour system. Her husband collected old books, lives of saints, and lots of second-hand mystery novels. A local pro-life group moved their library into our parish and catechism classes began for the children during the week. Our parish priest, of course, encouraged all of this, and his parish was filled with all sorts of folk, including young families, teenaged kids, babies, and toddlers playing, boys serving at the altar, and girls singing hearty Latin hymns.

Of course, there were some people who complained: the lawn was being ruined, babies should be in a crying room, the tabernacle and crucifix were too prominent at the front, there was too much incense, too much Latin, too many “of those pro-life people” as if that was a bad thing! These people left our parish to join more old-fashioned parishes that still used guitars for their hackneyed folk Masses, and pushed unattended youth programs. Unfortunate, but no matter: our pews were packed.

A few years later our priest was moved to a new parish up north. Some of those who had left came back. In one week the rope swing was cut down, the library door was locked, and now there are signs on the lawn that say “Do Not Climb Trees.”

We have been told that the Latin and incense bothered people so these have disappeared.

But, this is still a good news story: in God’s mercy, our new priest, a good man, continues to encourage the altar boys and the girls’ choir, the bell still rings at the consecration, patens at communion still reverence the Host. Most important, our new priest refused to remove the tabernacle from the front of the church and has kept Benediction each Friday, and because of this babies still cry from the pews each Sunday morning.

To sustain our hope we had been allowed a vision of the future, when people once again will know that trees are for playing in, grass is for running on, girls’ voices are for singing, boys’ hands for serving, and the sound of babies crying is the most beautiful sound in the world.