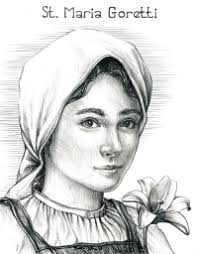 These were the unforgettable words which were spoken from the heart of the Venerable Pope Pius XII at the canonization of St Maria Goretti, on 24th of June, 1950. Maria, whose feast day is celebrated today, July 6th, has much to teach us and especially to our children and youth.

But who was this great saint who preferred to die rather than to give in to sin? Maria was born on October 16 1890, in Corinaldo, in the Province of Ancona in Italy. When her father died due to malaria, Maria’s mother had to struggle hard to feed her children, making their living from working in the fields, while little Maria cooked, sewed, cleaned the house and took care of her youngest sister Teresa. Even if as a family they suffered, they managed to keep their family united, principally because they all put God in the first place of their family life.

It was July 5, 1902, as she was sitting outside her home’s steps concentrating on sewing, when her 18-year-old neighbour, Alessandro Serenelli grabbed her and tried to rape her. Crying out, Maria warned him that it was a mortal sin and he would go to hell. Nonetheless, Alessandro would not listen and kept going on in his sinful way. No! It is a sin! God does not want it! she screamed as she fought him to keep being loyal to Christ. The more Alessandro choked her the more Maria resolutely said that she preferred to die rather than sin. When he saw that his plan failed so miserably, Alessandro took out a knife and, out of his senses, brutally stabbed Maria eleven times. As Maria tried hard to arrive at the door, practically covered with blood, Alessandro stabbed her thrice more and then escaped.

Maria’s cries woke the little Teresa who was completely terrified by what she saw. As Maria’s family returned home they witnessed the horrible scene of seeing on the floor their beloved Maria heavily bleeding. She was rushed to Nettuno’s hospital, the surgeon halfway through the operation to try to save her life, asked her: Maria, think of me in Paradise. She replied:  Well, who knows which of us is going to be there first? The surgeon did not mince his words: You, Maria. Realizing her imminent death, the courageous little girl said: Then I will think gladly of you. On her death bed Maria bravely and decidedly forgave Alessandro, while expressing her wish that he would one day join her in Heavenly glory. She passed away that day whilst gazing on the image of the Virgin Mary and holding tightly a cross to her chest.

Alessandro was arraigned, prosecuted and sentenced to thirty years of imprisonment. He admitted his crime. At first he was unrepentant of what he had done, until once he had a dream that he was in a garden and Maria was there and gave him lilies that instantly got burned in his hands. As he woke up he became adamant to change his life and engaged himself in a process of conversion. After spending some 27 years in prison Alessandro went directly to Maria’s mother and humbly begged her forgiveness, which she gave. Her mother explained her action in the following way: If my daughter can forgive him, who am I to withhold forgiveness?

Maria’s triumph over evil was sealed, being beatified by Pope Pius XII on April 27, 1947 and canonized on June 24, 1950 by the same Pontiff. But, and most of all, because Alessandro converted, was present for her canonization and later lived in a Capuchin friary working as a receptionist and gardener until his own death.

Pope Pius XII’s powerful words in her canonization homily at St Peter’s Basilica encourage us to hold dear and protect the virtue of purity and chastity, irrespective of our ages and status in life, starting of course from the young people.

…Why does this story move you even to tears? Why has Maria Goretti so quickly conquered your hearts, and taken first place in your affections?

The reason is because there is still in this world, apparently sunk and immersed in the worship of pleasure, not only a meager little band of chosen souls who thirst for heaven and its pure air – but a crowd, nay, an immense multitude on whom the supernatural fragrance of Christian purity exercise an irresistible and reassuring fascination.

During the past fifty years, coupled with what was often a weak reaction on the part of decent people, there has been a conspiracy of evil practices, propagating themselves in books and illustrations, in theaters and radio programs, in styles and clubs and on the beaches, trying to work their way into the hearts of the family and society, and doing their worst damage among the youth, even among those of the tenderest years in whom the possession of virtue is a natural inheritance.

Dearly beloved youth, young men and women, who are the special object of the love of Jesus and of us, tell me, are you resolved to resist firmly, with the help of divine grace, against every attempt made to violate your chastity? …

…Finally, all of you who are intently listening to our words, know that above the unhealthy marshes and filth of the world, stretches an immense heaven of beauty. It is the heaven which fascinated little Maria; the heaven to which she longed to ascend by the only road that leads there, which is, religion, the love of Christ, and the heroic observance of his Commandments.

We greet you, O beautiful and lovable saint! Martyr on earth and angel in heaven, look down from your glory on this people, which loves you, which venerates, glorifies and exalts you. On your forehead you bear the full brilliant and victorious name of Christ. In your virginal countenance may be read the strength of your love and the constancy of your fidelity to your Divine Spouse. As his bride espoused in blood, you have traced in yourself His own image. To you, therefore, powerful intercessor with the Lamb of God, we entrust these our sons and daughters who are present here, and those countless others who are united with us in spirit. For while they admire your heroism, they are even more desirous of imitating your strength of faith and your inviolate purity of conduct. Fathers and mothers have recourse to you, asking you to help them in their task of education. In you, through our hand, the children and the young people will find a safe refuge, trusting that they shall be protected from every contamination, and be able to walk the highways of life with that serenity of spirit and deep joy which is the heritage of those who are pure of heart. Amen.

While meditating on these penetrating and life-changing words that emanated from the anointed lips of Pope Pius XII let us remember what Pope St John Paul II taught us in his Angelus address of Sunday 6 July 2003, Feast of St Maria Goretti: Purity of heart, as with every virtue, requires a daily discipline of the will and a constant interior discipline. Above all, it calls for assiduous recourse to God in prayer(no.2). In recalling this little and sweet martyr of purity, as aptly defined by Pope Pius XII, let us pray to her:

St Maria Goretti who, strengthened by God’s grace, did not hesitate even at the age of twelve to shed your blood and sacrifice life itself to defend your virginal purity, look graciously on the unhappy human race which has strayed far from the path of eternal salvation. Teach us all, and especially youth, with what courage and promptitude we should flee for the love of Jesus anything that could offend Him or stain our souls with sin. Obtain for us from our Lord victory in temptation, comfort in the sorrows of life, and the grace which we earnestly beg of thee (here insert intention), and may we one day enjoy with thee the imperishable glory of Heaven. Amen.

St Maria Goretti, who in you, the children and the young people find a safe refuge, pray for us!