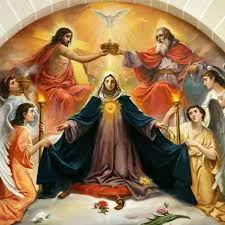 A blessed memorial of the Queenship of Mary, a feast formally instituted by Pope Pius XII on October 11, 1954, in his encyclical Ad Coeli Reginam, four years after his own proclamation (Munifecentissimus Deus, Nov. 1, 1950) of the Assumption of Mary into heaven, body and soul, and one hundred years after his predecssor’s, Pius IX’s, definition of the Immaculate Conception of Mary (Ineffabilis Deus, Dec. 8, 1854). The feast was originally celebrated on the last day of May, but in the revision of the liturgical calendar after Vatican II in 1969, was moved to this day, August 22nd, the octave of the Assumption, with which this feast is closely connected.

We honour Mary as ‘Queen of heaven and earth’ due to her role in our salvation, as the Mother of God, and, as Leo XIII put it, her almost ‘immeasurable power’ in the distribution of graces. In the wisdom of His providence, the Almighty has done, and continues to do, great things with and through His lowly handmaid.

In the words of Pius XII:

Let all, therefore, try to approach with greater trust the throne of grace and mercy of our Queen and Mother, and beg for strength in adversity, light in darkness, consolation in sorrow; above all let them strive to free themselves from the slavery of sin and offer an unceasing homage, filled with filial loyalty, to their Queenly Mother. Let her churches be thronged by the faithful, her feast-days honored; may the beads of the Rosary be in the hands of all; may Christians gather, in small numbers and large, to sing her praises in churches, in homes, in hospitals, in prisons. May Mary’s name be held in highest reverence, a name sweeter than honey and more precious than jewels; may none utter blasphemous words, the sign of a defiled soul, against that name graced with such dignity and revered for its motherly goodness; let no one be so bold as to speak a syllable which lacks the respect due to her name.

If Mary is the perfect queen, our own rulers, such as they are, could do with some imitation of her. I wonder if Justin Trudeau, as a self-professed Catholic, will recite a post-prandial rosary with his family this evening, and is celebrating this feast with fitting homage and devotion? It would certainly help him, and this fair land, if he were to do so, and as a fellow Catholic, I would urge him in that direction.

But, from what we know, perhaps he needs to work on a few things at a natural level first, like what human life is, the duty to protect that life, and, even in terms of manners, which maketh the man, and how to respond to people, even of the vociferous variety.

The other day, when a woman at a recent event, a corn roast outside a small town in Quebec, asked Justin Trudeau, our own kinglet, when the $146 million of taxpayer money (likely a significant underestimate) spent on fast-tracked immigrants was going to be refunded, the ensuing ‘dialogue’, if such it may be called, went viral. Now, to be clear, these are not ‘normal’ immigrants, who go through all the years-long process of applying, waiting and wading through the reams of red tape and bureaucracy; rather, they are the chosen, flown here under ‘humanitarian’ auspices, many from Syria, most of them Muslim; others, of late, have just been walking across our southern border.

Our vaunted Prime Minister did not really bother answering the question, but rather replied insouciantly, that the views of bigots such as she, (a natural citizen born and raised in Quebec), should not be allowed in Canada. Here is part of the exchange:

Prime Minister Justin Trudeau told a woman who heckled him about illegal immigrants at a recent rally in Quebec that her “racism has no place” in Canada. The exchange was caught on video, and is now making the rounds online.

“I want to know when you are going to refund the $146 million we paid for your illegal immigrants,” shouted a woman in French at the prime minister at an event in Sabrevois, Quebec on Thursday.

“Ok, Madame,” Trudeau responded. “This intolerance towards immigrants has no room in Canada.”

If you would like to read the whole sorry thing, here it is.

Amongst the many problems in our modern culture is the incapacity to reason and debate properly; instead, people just yell slogans at each other, across a crowded room or, here, a cornfield. I am not confident many ever even the ‘art of right reason’, as Aristotle might put it, also known as logic; in fact, I am rather sure they don’t. There are nuances and distinctions that must be made in the whole ‘immigrant’ question, that truly need to be hammered out, a principle that applies to most other questions.

Yet, here we have, a yelling match. Eventually, after some shouting back and forth at various decibels, the woman was ‘escorted’ out by two burly RCMP officers wearing, ironically, brown shirts. Hmm.

What this signifies is that Trudeau and his Liberals have not much of a plan on much of anything, except, it seems, the continued dismantling of what little there is left of ‘Canada’. They seem, glassy-eyed, to be guided by slogans, and not much else.

This whole immigration issue hit home for me recently, when my sister-in-law, who lives just outside the rather remote and small city of Pembroke, 1.5 hours north-west of Ottawa, was accosted in the Wal-Mart parking lot by one of these aforementioned immigrants, a man, who asked her for ‘money for his rent’. Now, my sister-in-law is raising three children, a stay-at-home Mum, a fourth on the way, on one very limited income (her husband, my brother, was out at, what was that quaint term, ‘work’), and she has very little excess to help pay another family’s rent. But, taking pity, she offered the man a pack of bagels, which he disdainfully refused, wanting ‘money’.

He did not explicitly threaten, at least not yet; but, I ask, should such fraught interactions occur, leaving a bad taste in one’s mouth, a man approaching a young mother, alone with her small children?

Whatever one’s views on such immigration, it seems the government has no idea what to do, not just in terms of paying back the Quebec woman’s (and our own) money, but any short or long term plan to integrate the continuing flood of immigrants. To dump thousands of people on various towns, cities, neighbourhoods across Canada, and leave them to their own devices, is not a ‘plan’. Are they able to work, physically and legally? Do they have credentials, capacities, skills?

When the immigrants came across from England on the Mayflower in the 17th century, they built a society, more or less from scratch, clearing forests and tilling the land. When thousands more came across in the 18th to 19th centuries, they worked and built up from that basis what we now know as America and Canada, the whole infrastructure of roads, bridges, houses, universities, churches, neighbourhoods and so on.

We now live on the capital of that hard work, and the whole notion of ‘work’ has changed quite a bit since those relatively halcyonic days, but work immigrants must, somehow, if they are to integrate into society as families, as communities, and as citizens who are not just a liability and a drain on our resources, but an asset. Only such a policy is fitting with their own dignity as human beings.

I ask the simple question: Why should that man in the Wal-Mart parking lot have to beg for his rent? Or does he have to?

And, on a broader question, how do we assimilate people who share not our Christian culture, or at least what used to be such? How much ‘multi-culturalism’ can a society bear, and still function as any sort of unified community, as a nation, a country, a people? While on the Queenship of Mary, it is a consistent teaching of the Church that it is only by being guided by the teachings of Catholicism (with Christ as King) that a society can be governed rightly; the further it strays from such, the more chaos and dis-integration it will experience (look around, dear reader, and such is worse in Europe).

The Polish people have answered what might seem like the convoluted immigration question in a rather simple way, and seem to be doing all right: Poland is Catholic and, well, Polish. More on that in a later post.

Even at a basic, natural level, does Mr. Trudeau, a multi-millionaire living in luxurious splendid isolation, wherever he goes, have to right to take in thousands of indigent people, with no means of provision, no prospects of employment, leaving them apparently at the mercy of, well, whatever, including random homeschooling mothers in parking lots?

It is easy to be ‘generous’ with other people’s money, and the arrogance and imprudence of people like Trudeau, virtue-signallers who do what they think the ‘right’ thing, but on the backs of those who are already lifting loads almost beyond them, is breathtaking.

And those who dare question his policies? Well, there’s always the brownshirts.

Be prepared, dear readers. This is likely only the beginning of much more to come.