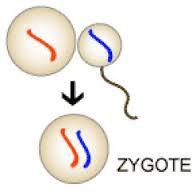 There are sometimes good things in the news, like this report from the Telegraph that when conception occurs, that is, when the male sperm fertilizes the female ovum, and the 23-chromosomal DNA of both meiotic cells fuse to form a new human with 46 chromosomes, there is a bright flash of light.  (But there is always a downside:  This phenomenon was discovered during in-vitro fertilization treatments, and the scientists claim that the ‘brighter the light’, the more healthy is the zygote.  I wonder).

Now, the scientists explain this by natural means, something to do with a not-fully-explained ‘zinc spark’.  I was surprised to hear the article describe that this luminous event “marks the very moment that a new life begins”.  Hmm.  What kind of life might that be?  Could they be admitting that human life begins at conception when, as they say, the sperm meets the ovum at conception?

The Church has never dogmatically declared when exactly the soul is ‘infused’ into the body, a metaphysical event that transcends the physical world.  As the 1987 Instruction on Reproductive Technologies, Donum Vitae, declares “no experimental datum can be in itself sufficient to bring us to the recognition of a spiritual soul”.  However, the Church has always declared, well before the advent of modern science, that the zygote must be treated as a human being from the very first moment of conception, for the sacred process of life has already begun.   This is the reason why human sexuality is sacred, for it itself is ordered to the divine creation of human life.

That said, we now do have strong evidence from modern genetics that the zygote is a fully ‘personal’ entity, with his own human characteristics, distinct from his parents.  As the document goes on to state:  “nevertheless, the conclusions of science regarding the human embryo provide a valuable indication for discerning by the use of reason a personal presence at the moment of this first appearance of a human life: how could a human individual not be a human person?”

The Church may be moving ever-closer to declaring the little one-celled zygote a human person.  The 2008 follow-up Instruction, Dignitatis Personae, taught that although “Donum vitae, in order to avoid a statement of an explicitly philosophical nature, did not define the embryo as a person”, what it did to was “indicate that there is an intrinsic connection between the ontological dimension and the specific value of every human life”.

We are formed as ‘clay in the hands of the potter’, God fashioning us intricately, as the Psalmist sings, within the ‘depths of our mothers’ wombs’.  This divine process of human creation begins at conception, and ends only at bodily death, and, as Instruction goes on to say:  “the reality of the human being for the entire span of life, both before and after birth, does not allow us to posit either a change in nature or a gradation in moral value, since it possesses full anthropological and ethical status. The human embryo has, therefore, from the very beginning, the dignity proper to a person”.
Yes, Dr. Seuss was right (whether he meant to be or not) that “a person is a person, no matter how small”.

The bright flash could be one more ‘sign’ that what happens at conception is something unique, powerful and, yes, sacred and holy.  A new soul is created, fused to a new body, to form a new person, on a trajectory towards eternity.