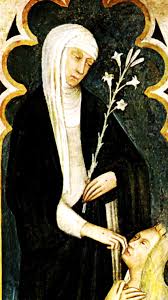 Saint Catherine of Siena (1334-1380) was a feisty, indomitable woman.  One might, in a Catholic way, claim her as an early ‘feminist’, in the true JP II sense of that term, recognizing the genius, and the power, of woman, and her role in the Church.

Catherine was born the 23rd child of an Italian family that would eventually number 25 children.  In the unbelievable bustle of such a household, perhaps because of it, Catherine recognized her call to give all to Christ early on (she apparently had her first vision of Christ at five or six years old).  Refusing all offers of marriage, she consecrated herself in the third-order Dominicans, eventually wearing a modified habit (in which dress she is often pictured).  Her life was spent in deep prayer and penance, with profound mystical revelations which she dictated  (she never learned to write), forming the basis of her masterpiece The Dialogue of Divine Providence , and earning her the title (bestowed in October of 1970 by Paul VI) of one of three female Doctors of the Church (along with the two Theresa’s, of Avila and Lisieux; there are only 36 Doctors in total, so Catherine is in eminent company).

Catherine died at the young and Christ-like age of 33, but not before changing the history of the Church and the world (that is, besides the universal effects of her prayer and writings).  What she perhaps is best known for in the secular mind is her criticism of, and influence over, the Popes of the era, particularly Gregory XI, who was living in the lavish papal court in the ‘papal city’ of Avigon, in southern France.  Decades before, to escape the intrigue, poverty, danger, fetid air and general civic collapse of 14th century Rome, the French cardinal, Bernard de Got, elected as Clement V in 1309 under the coercive influence of the French King, Philip IV, le Bel, or the Fair as he was called, refused even to go to Rome, setting up a whole Curia in the more ‘agreeable’ climate, in more ways than one, of Avignon.

This caused no end of evils:  The court was rife with immorality, and King Philip had the papacy under his over-bearing kingly thumb, with the Pope almost as his personal royal chaplain (he had Clement dissolve the meddlesome, but noble, Knights Templar, and confiscated their immeasurable wealth for the royal treasury).

By the time Catherine came of age later that century, the Popes were still at Avignon (seven were to reign there, all of them French), and Catherine is famous for her influence over the Pope of her era, Gregory XI, urging him in no uncertain terms that he had to return to Rome, or face the severe, but just,  judgement of God.  At least in large part due to her insistent letters, he did return to the eternal city on September 13, 1377, only to die a short time later.

Unfortunately, the ‘Babylonian captivity’, as the Avignon papacy had come to be called, gave rise in the ensuing conclave to what is known as the ‘Great Western Schism’, to distinguish it from its Eastern counterpart (still with us in the sad separation of the Orthodox community from full communion).  Meeting in April of 1378, the cardinals, coerced by an angry Roman mob outside the hall,  elected what they thought was a bad choice, the irascible Italian Bartolomeo Prignano.  They tried to elect a new Pope, but only ended up with two rival claimants to the papacy, a Pope, and an anti-Pope who fled, you guessed it, back to the ‘cucumbers and melons’ of Avignon.  Each ‘Pope’ had his own fiercely loyal adherents, convinced of the legitimacy of the divine right of their Vicar of Christ.

It was Saint Catherine, again, who recognized the true (but unpopular) Pope, in Rome,  who had taken the name Urban VI, and held him steady in the course of his own rightful claim.  The schism would not be healed until well after Catherine’s death in 1380, at the Council of Constance in 1417, when the true Pope of the Roman line resigned, and the Council declared his successor.

There are many lessons we may draw from the great life of Saint Catherine:  The power of prayer and sanctity, the witness of silence and seclusion, remaining steadfast in ones’ convictions, and, for our purposes, that even Popes sometimes need correction, as well as prayer and corroboration.

Catherine was ahead of her time, refusing the two normal vocations for women of her age, either in married life, or secluded in a convent.  She knew (and Christ confirmed) that she was to live a consecrated life in the world, with the courage to confront even those in power if what they were doing was harmful to themselves, the faithful, and the Church.

However, we must also recall that Catherine was a true ‘daughter of Christ’, and would always submit in joyful and prayerful obedience, when her work, and her words, were done.

I do not think it is a revelation to the readers of these pages that we are living in interesting times, in the world and the Church, perhaps not as politically chaotic as the 1300’s (although the ways things are shaping up in the U.S., one never knows), but intellectually and culturally the sands are shifting all around us.  As I have emphasized, we must use our own wits and counsel to see our way through the tangled web of ambiguity and obfuscation, to discern and criticize respectfully when need be, but always loyal to Christ and His Church, against which the gates of Hell will never prevail.