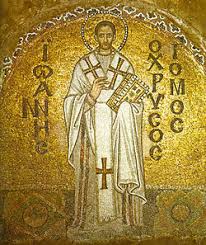 Saint John Chrysostom (+407) was a model bishop, a doctor of the Church, an ascetic and contemplative monk who wanted only to retreat from the turmoil of life in the Eastern empire, and live a life devoted entirely to God. He was chosen first as a priest in Antioch, where he became renowned for his eloquent yet forthright and clear preaching (hence, his ‘surname’, Chrysostom, ‘golden mouth’). In 397, without his knowledge or consent, he was nominated Patriarch of Constantinople, and took on the burden as the will of God, giving himself wholeheartedly to the task. His sermons, letters, and treatises, all worth reading, fill volumes. As he said once, in an apiarian analogy that sums up his own life:

Yet, for all his charity, he did not mince words:

We must not mind insulting men, if by respecting them we offend God.

Due to his forthrightness in condemning the sins of his age – and they were many, as in any age, not least of those in high places – John quickly antagonized the Patriarch of Alexandria, in Egypt, a certain Theophilus, who coveted John’s more exalted position in the capital of Constantinople. Perhaps more tragically, he also raised the ire of Eudoxia, the luxury-loving wife of the uxorious Emperor Arcadius. In her anger, she had him banished twice; the first time, the much-loved Patriarch had to be recalled, as the people would likely have revolted.

But when the Empress had a statue of herself unveiled right in front of the cathedral in 404 (and one wonders how it portrayed her) John protested, and Eudoxia, her vanity and pride wounded, flew into a rage worthy of a Disney villainess. Hell hath no fury, and all that. To prevent bloodshed, John surrendered to the authorities, going into exile, where he continued to write to his flock. Providentially, as one may take it, the cathedral burned down in a conflagration just afterward.

Living too long for his enemies, and still having too much influence for their liking, in 407 John was forced on a ‘long march’ through the most inhospitable conditions by two implacable guards to the very boundaries of the empire, in the midst of which his body, already weakened, gave out, his last words being, Doxa to theo panton eneken (Glory be to God for all things). He died, hated by the empress and a few other ‘elites’, but beloved by his people, as should be the case for all shepherds. His body was eventually returned to Constantinople in 438 with great pomp and ceremony, and buried in the church of the Apostles.

Saint John is a doctor of the Church, and we have more of his salutary writings than almost any other, except Saint Augustine, and his influence is incalculable. We could use a few more fearless shepherds like him, to set the world spiritually ablaze.

A final note: Beware the biography on Wikipedia, which claims that John, in a fiery sermon condemning homosexuality, was the originator of the Church’s ‘homophobia’. The sin of Sodom, so sayeth the anonymous Wiki-editor, was seen, before John’s time, as a violation of ‘hospitality’, and not of the sin that would come to bear its name. This would come as news to Saint Paul, writing three centuries before Chrysostom, who took a rather dim view of men using other men as women and, pardon the pun, vice versa:

Do not err; neither fornicators, nor idolaters, nor adulterers, nor the effeminate, nor sodomites, nor thieves, nor the covetous, nor drunkards, nor the evil-tongued, nor the greedy will inherit the kingdom of God.