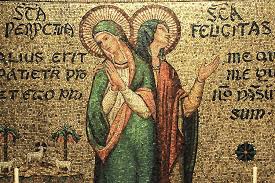 Today is also the feast – a commemoration now, in the Lenten calendar of the Novus Ordo – of the early martyrs Perpetua and Felicity, put to death likely in the year 203. This was under the reign of Septimius Severus, who seems on the whole to have been well-disposed to Christians.  But the religion was still ten years away from being legally recognized by Constantine, and could suffer persecution even without an emperor’s explicit command, for example, by local magistrates with a grudge, and to offer a spectacle to the people – the narrative claims the ‘games’ were in honour of the emperor’s birthday, which you may take as you will.

The two saints are amongst that rare group of martyrs the ‘acts’ of whose passion are recounted in contemporaneous terms, in this case in the first person, by Perpetua herself, with additions from an editor, offering a vivid window into the real-life persecution of Christians, the horrible nature of their sufferings, and what supernatural courage and determination they displayed. It all makes for a rather dramatic and spiritually embracing read, highly recommended.

Both Perpetua and Felicity were young mothers, and even with this near-irrestible earthly bond, both refused to apostatize and give up their faith – their very souls. They knew God would take care not only of their own eternal fate, but also the fate of their infants. Perpetua offered her child to her own mother and brother to be raised, while Felicity – a slave girl – was actually pregnant, and feared she would miss out on her martyrdom, for the Romans, for all their cruelty, refused to put to death women in the family way. She gave birth in prison, giving the child away to Christian parents we may presume.

Both women, along with a number of others, were sent out into the stadium, scourged, then set upon by wild beasts, who tore at their flesh. Wounded and bleeding, they were dispatched by the sword.

By ‘hate’ Christ means that we must love God above all things, and everything, and everyone else, in light of this same love of God. As such, we must be willing – should push come to shove, so to speak – to ‘lose’ everything else, even our nearest and dearest, for His sake. For only from such an eternal perspective can be hope to find and gain our true reward.

We may have a well-founded hope that both Perpetua and Felicity are now enjoying the company of their children, and their children’s children to many generations in a happy Jerusalem. For God is never outdone in generosity, and what we offer to Him – however radical it may seem – He will give back to us, flowing over, a hundredfold.