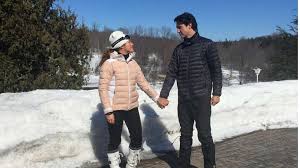 Yesterday, I alluded briefly to Sophie-Gregoire Trudeau, and how she had taken Emma Watson on a scooter ride around Ottawa upon the latter’s visit to the capital city last year. One would think they would be fellow travelers in more ways than one, sharing the feminist goals and dreams, whatever they may be.

Well, let me eat my words, or at least nibble them a bit. On this ‘International Women’s Day’, Ms. Trudeau made the capital sin against feminism by heaping some degree of faint praise upon men. Here are the words she tweeted:

Are you ready to ignite change? This week, as we mark International Women’s Day, let’s celebrate the boys and men in our lives who encourage us to be who we truly are…take a picture holding hands with your male ally and share it on social media..

This is accompanied by a photo of Justin and Sophie in their down winter coats, holding hands, looking lovingly into each other’s eyes.

I would say that this is sort of a step in the right direction. At least, not a step in the wrong direction. They do seem to accept their male- and female-ness, are husband and wife, have borne children, and Sophie seems to want to support her husband.  All of that is anathema to a certain, perhaps a large, segment of the feminist movement, which can brook no reliance upon the enemy, any hint of cooperation and complementarity, with ‘the other’.

This raises a contradiction, akin to Ms. Watson’s, but in the other direction. Sophie, of a sort, is celebrating her marriage and love, while the unhinged former Potterite is selling her sexuality, and, for want of a better word, lust. Yet the former child star, chosen in her childhood from amongst a myriad of auditioners to play Hermione, one supposes, for her tomboy-ish looks, opposite the wan Daniel Radcliffe, is not averse to playing up classical romance and all that sweet boy-meets-girl thing in the Beauty and the Beast, whose message is how love can transform an ugly man into a handsome one. What will the feminists say of that? Will the ‘gay’ sub-plot placate them?

So it goes. Both Emma and Sophie raise the ever-swelling ire of the feminists, whose eyes rove the world looking for any opposition. One wonders, is it because many of them are not married, like Ms. Trudeau, whether by choice or coercion, and/or have little sexuality to sell, like Ms. Watson?

The male side of the Trudeaus, on the other hand, is still a chip off his father’s arrogant and destructive block, but curiously metastasized into someone both pathetic and anger-causing at the same time.  He has just pledged, on this Women’s Day, $650 million of taxpayer money to ‘reproductive and health services’ (a curious euphemism) for women around the world. As the article quotes our benighted Prime Minister:

far too many women and girls around the world see reproductive rights violated and, in many cases, are subject to gender and sexual-based violence and “harmful practices” such as female genital mutilation.

As the article goes on to make clear, if such is necessary, Trudeau is a ‘self-described feminist’, and, as we all know, feminism requires contraception and abortion.  But one must wonder, is this so women may use their bodies?  Or, rather, that men may have use of their bodies as they see fit, just as Paul VI predicted in Humanae Vitae.  As the Holy Father described what would happen were contraception and abortion to become widespread and available:

Another effect that gives cause for alarm is that a man who grows accustomed to the use of contraceptive methods may forget the reverence due to a woman, and, disregarding her physical and emotional equilibrium, reduce her to being a mere instrument for the satisfaction of his own desires, no longer considering her as his partner whom he should surround with care and affection.

‘Reproductive health’, especially in certain cultures that, shall we say, have a less-than-exalted view of women, will not be used so that women can have all the sex they want.  It’s so the men can.

Of course, Mr. Trudeau cannot or will not see this.  I can only surmise that he is still living in his Canadian-university-lite-bubble of his never-ending youth, his mind filled with memories of frat parties and ’empowered’ women safely ensconed in the laws and customs of Canada protecting rank hedonism, the same women now grown into harridan-esque middle age in their vices who, one supposes, comprise some of the more strident sirens of the feminist credo.  Trudeau imagines, I suppose, that everyone thinks and lives like he does, or perhaps that everyone should.  ‘Reproductive services’ are bad  enough for women in Canada, but Trudeau is unable or unwilling to see that the last thing women in impoverished nations need, where they have none of the privileges and perks of Canadian women, in fact are subjugated, are more condoms, ‘Pills’ and abortion, which will do nothing to ‘free’ them.  And the last thing we need is to pay more than half a billion dollars, money that we do not have, to fund it.

Ah, Canada.  And we thought the Ninevites were bad.

Although I cannot judge the man, and hope he is acting in some degree of invincible ignorance, a victim of his unfortunate upbringing and education (such as it is), Trudeau espouses many evil principles, with a strong dictatorial streak behind the vacuous boyish grin and the push-up antics. I despair that we have to look forward to almost four more years of this, and I am not sure what we know of as ‘Canada’, or the tatters of what is left of it, can survive his governance.

As John Paul predicted in 1991 in his own prophetic encyclical Centesimus Annus, and as I quoted recently in an article in Crisis, ‘a democracy without values easily turns into open or thinly disguised totalitarianism’, and Trudeau with his majority parliament of  trained seals, is slipping off the thin disguise.

Hope and pray this Lent.