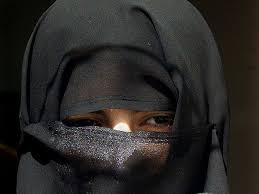 The recent ban in the province of Quebec on the niqab, the Islamic face-covering, when receiving ‘public services’ (reserved, of course, only for females) has raised a number of questions. Is the State interfering in religious freedom? Should Muslims, and Muslim women in particular, have the right to cover their face? (The underlying and, for various reasons, unspoken question is whether Muslim men are coercing their women to wear the face covering, and whether they have the right to do so).

Trudeau and his Liberal mannequins are dutifully touting the notion of ‘religious freedom’, as though this mantra solved all difficulties. Au contraire: In a multicultural and pluralistic society such as Canada, the whole notion of ‘religious freedom’, its scope and limits, is in reality a rather complex topic, filled with nuances and distinctions, requiring deep thought, prudence, counsel, experience, a wide reading, and most definitely not the emotive, knee-jerk complaisant reactions too often seen in our purported elites.

The State does have the right, and often the duty, to moderate, even restrict, things done in the name of ‘religion’, however broadly defined. The general principle offered in Dignitatis Humanae, the Vatican II declaration on religious freedom, is that people should in general be left free from coercion by the State (something I heartily endorse), unless, and here is the rub, their practices violate ‘just public order‘.

What this means is that we give to others what we ‘owe’ them, as the Latin term ‘ius‘ implies, at the very least those things without which ‘public order’ cannot be preserved. We cannot withhold our taxes, nor walk around el fresco, nor cast various victims into the caldera of volcanoes, because our religions tells us so.

These seem obvious. But there are many intermediate cases that require some thought. Can a blood transfusion be forced upon a Jehova’s Witness, or indeed any apparently ‘immoral’ treatment given to an unwilling patient, to save their life? Should children be taught the principles of jihad, that all people should and must eventually submit to Islam? Can a mosque be built next door to a Catholic church? Might an imam be permitted to preach in public schools, as I recently read is now done?

Before we drift off topic, back to the question before us, which is whether ‘just public order’ can be preserved if a certain segment of the population is determined to permanently hide their faces in public?

The answer is, of course, no. People are and should be free to hide their faces, don a mask, wear a scarf, wrap a bandana, or cake oneself with Hallowe’en make-up, as they see fit, at least on their own private property and various other locales.

However, in those cases wherein one’s identity must be known, as in getting a driver’s licence, or using a transit pass, or entering a controlled area, like a bank or hospital or the parliament building itself, then one’s face must be shown. Ponder: Although I don’t look particularly like a woman (although I suppose some women might look like me) what’s to stop people from impersonating others? Even that very verb, impersonate: For the face is the key aspect of our identity, our personhood, the primary visible thing that shows forth who we are. Permanently hiding that identifying characteristic, with its concomitant anonymity, order, whether public or even private, cannot be preserved.

Yet already in its very infancy the law is being eviscerated: Just yesterday, the Quebec Justice Minister decided that transit officers, that is, bus drivers, will not be asked to enforce the law, requiring niqabbed women to reveal their faces, and in turn potentially face the Shariac wrath of their husbands, whether immediate or, what is likely worse, delayed. As the union of bus drivers rightly argued, they are not police officers, and I’m not sure even the latter will want to enforce this decree.

What we are facing here, pardon the pun, is the clash of cultures, predicted as inevitable when Islam reaches a certain proportion and power in a once-Christian society, be it Quebec or Belgium or France or Sweden.

I will leave aside for now the deeper implications of the niqab, and whether it is right and fitting for the male segment of a given religion to deny its fairer sex, to paraphrase what the Irish band U2 sang what now seems so long ago, the right to feel the sunlight on their face, and the cool wind in their hair. Even the most strict religious Orders in the Catholic church, back in the pre-Vatican II days of voluminous habits and head coverings, left the faces of such consecrated women uncovered, just so they could pray, converse, walk and talk as free persons.

On that note, the Greek philosophical term, prosopon, which originally meant a ‘face’, was taken up in the early Church’s theological tradition by synecdoche, to mean the person himself.

It would be a sad irony that Quebec’s revolution tranquil, which began on the note of female emancipation from the bogeyman of ‘patriarchy’, should end on the discordant key of this all-too-real subjugation, however ‘voluntary’ it purports to be.

For the face of a woman, and a man for that matter, is that which shows forth their very dignity and beauty as persons, made in God’s image; and it is that same face that will see God’s own face one day. Like the proverbial lamp under a bushel, let it not be hid ’til then.