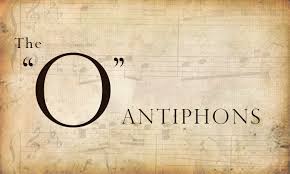 On December 17th we begin the seven days of proximate preparation for Christmas, sort of analogous to the more familiar twelve days of Christmas post-Christmas.  In the Western tradition of the Catholic Church, one of the liturgical preparations for the great feast are the ‘O Antiphons’, seven titles from the Old Testament which point to, or typify, the coming Messiah.  The origin of their compilation goes back to the very dawn of the Middle Ages, with reference to them in the writings of the Roman counsel and philosopher Boethius (480-524 a.d.).  These seven antiphons, which begin on December 17th, and end on December 23rd, Christmas Eve’s Eve – a sort of novena of seven days – are as follows, in their Latin original:

They are, in their somewhat variable English translations, O Wisdom, O Lord God, O Root (or Rod) of Jesse, O Key of David, O Rising Sun (or Morning Star), O King of the Nations (or Gentiles) and O Emmanuel.

Each day, these are the antiphons for Vespers, the universal Evening Prayer of the Church.  Readings also go along with each of them, taken from the Old Testament, making clear how each of these titles allegorically referred to the long-awaited Messiah.

It may well be intentional, and no coincidence (but there are none such, really, in God’s good providence) that the acronym formed by the  first letter in each of the antiphons, when spelled backwards, makes ero cras, which is Latin for “I will be (there) tomorrow“.   This is likely no coincidence, for the mediaeval theologians loved puns and plays upon words, so we may surmise they were deliberately framed this way, to help us even further in our ‘waiting upon’ the Christ, who would free His people from their sins, and offer the world redemption.

We should try, in the midst of a consumerist culture, to resist the celebration of Christmas before Christmas.  I know this is a weathered lament, but one that merits restating:  We prepare for Christ in the season of Advent, and we celebrate his arrival with Christmas.  The zeitgeist of the age, outside and, to some extent, even within, the Church, is difficult to resist, with everything from social events to advertisements in shops to songs, but resist we must.  Some application to bodily and spiritual preparation is requisite so that Christmas remains Christmas, and that the celebration does not end the day after Christmas, just when it is supposed to begin.   (Which day, incidentally, is not Boxing Day, but the feast of (Saint) Stephen, the first martyr, as the opening lines of the traditional hymn on Good King Wencelsaus makes clear).

So a very blessed last days of Advent to one and all, as we prepare for the birth of our Saviour and King…