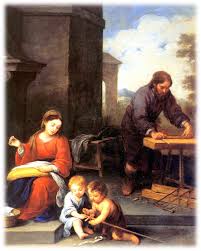 In the waning years of the 19th century, before the war to end all wars, and the subsequent instantiation of what is called ‘real socialism’, May 1st was adopted as ‘International Workers’ Day’, to celebrate the rights of the laborer, in light of Marx and Engel’s 1848 Communist Manifesto: ‘Workers, unite!’

We all know what Lenin, Stalin and their host of Bolsheviks did with their ‘rights of workers’, turning them all into Communist cogs in a machine, with ‘work’ is a commodity to be used by the ‘state’, to which entity man is entirely subordinate. For all their talk of the ‘working ‘man’, communist regimes believe far more in slavery than in human dignity. In fact, they don’t have much notion of dignity and rights at all – as the ChiComs have demonstrated, even since the purported ‘fall of the Soviet Union’ in 1989 or so. Be not deceived, for the errors of Communism are still very much with us and, as Our Lady of Fatima predicted, are spreading around the world, in more ways than one.

It was to combat the heinous falsities of Communism, particularly their erroneous view of human labour, that Pope Pius XII instituted this memorial of Saint Joseph the Worker in 1955, alongside Saint Joseph’s principal feast day on March 19th, to show the true value of the ‘sweat of our brow, and the work of our hands’.

Workers of the world should unite, but around the true principle of work:  Not as a materialistic endeavour, whose sole purpose is to produce ‘goods’ for the State or the marketplace in some sort of Hegelian dialectic; in their view, once a worker fails to produce what the state considers valuable, he can be cast aside like a useless machine, or as a tired out horse, and sold for glue.

Rather, in the true and Catholic view, work is seen a free and ennobling activity by an immortal being whose primary purpose is to perfect the worker himself.

This is what Pope John Paul II in Laborem Exercens (1981) his masterful meditation on human labour, calls the ‘subjective’ dimension of work, making the worker himself better, and more apt for heaven, by exercising his talents, which exceeds in importance the ‘objective’ dimension, the production of goods themselves, which is where most of our energy and focus currently goes. We should value quality over quantity, and being over having.

As the Holy Father put it:

It matters not so much what we do, but who is doing the work:  All labour – prescinding from dehumanizing, degrading and even sinful work – is dignified by the very fact that it is a human person, made in the imago Dei, who is working.  Yes, some should be remunerated more than others based on the objective value of their work (we ‘value’ the work of neurosurgeons more than baristas, or most do).  But every worker deserves a just wage, dignified work conditions, and for their work to be valued.  Everyone has a right to work, in some way, shape or form, which is why the Magisterium can truly call the plague of widespread unemployment a ‘scourge’, recalling of course that this right also implies a duty on the worker’s part to work well, with excellence, diligence and greatness of soul.

Further, the more we can impress our own personality upon the work we do, the more the work will perfect us and, in general, the more perfect the work will be. That is why craftsmanship, producing goods that we make with our own perfected talents, is much more fulfilling than mass-produced, assembly-line factory goods, slapped together by machines, or workers forced to work like machines, in faceless factories. Far better a hand-made cabinet than pressboard imitation from Ikea. This is why Saint Joseph would never build such a piece of ‘furniture’- if we may term it so – obsolescent and already falling apart as it rolls off the assembly line, for it would not reflect who he really is.

And who would not rather a home-baked apple pie or a hand-crafted Bavarian dessert – made with care, devotion and even love – than a microwaved, frozen doughnut from Tim Horton’s? (I say this from experience – a lovely Polish bakery in Toronto I knew from years ago, with scrumptious offerings, upon a return visit, was replaced, yes, by a ‘Timmie’s’)

We may pay more, but is not the worker, and the value of good produced, worth the cost?

We can safely surmise that this is how the foster father – the nutricie, of the Christ – worked, and he taught his divine Son to work, in the deep, metaphysical meaning of human labour, which is far more than ‘making stuff’.  And this is what Saint Joseph teaches all of us in today’s feast/memorial.