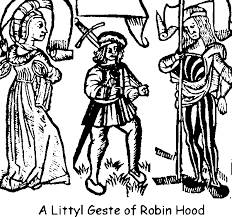 The legends of Robin Hood and his Merry Men exert a near universal appeal, and have done so for generations. From ballads to books to films, the daring rebel spirit of the Prince of Thieves who, over the course of many mythological transformations, came to be seen as a champion for the common people under an oppressive regime continues to inspire us to stand up for justice in our daily lives. As a figure of myth, he is most likely an amalgamation of more than one person, but his single image casts a long shadow over our cultural imaginations.

For Catholics, he should have an additional significance, for his legend unfolded in an England worlds away which was still within the fold of a united Christendom that acknowledged the spiritual supremacy of the Pope as Vicar of Christ and Keeper of the Keys. As such, his growing legend contains many fascinating religious elements, from its first inception to its latest incarnation, and is in many ways a part of our Catholic cultural and spiritual heritage.

Robin Hood, although an outlaw bandit, has often been portrayed as not simply a nominal Catholic but also a fairly pious religious observer. In spite of the fact that he was not above robbing and making fun of pompous and unscrupulous clergymen, in what could be called a response to the temporal corruption that had infected the Church hierarchy, he is not unlike the figure of Hereward the Wake, the Saxon resistance fighter who often tangled with the Norman aristocracy/clergy but still maintained his own religious practice.

In one story, Robin Hood is shown as risking capture in order to attend Mass in Nottingham in opposition to the warnings raised by his men, which nearly ends with his instant execution by the sheriff’s soldiers. He is also noted for refusing to be disturbed while in prayer, even when danger was imminent. This brings to mind St. Thomas More, who refused to be interrupted at Mass, even for the summons of the king.

Clearly, at least in later legendary developments, Robin Hood views his role as something of a crusader for justice on a local level, and this influences his behavioral norms and the role of prayer in his life. Death is a common companion stalking him, and he takes memento mori seriously. Famously, Robin recruited Friar Tuck, a rough-around-the-edges but true-hearted priest, both for his renowned fighting skills and to be the outlaw band’s chaplain. Although metamorphosized for various purposes over the course of the legend’s development, the friar became a central figure of spiritual consciousness in the tales.

Another important religious element found in the early ballads was Robin’s deep devotion to the Blessed Virgin Mary, who was originally said to be the only woman in his life. Some have related this to an earlier pagan tradition honoring “The Lady of the Wood”, given his relation to forest dwelling. Either way, this is portrayed as causing him to take special care never to harm a woman, or even a man in the company of a woman. Mary also serves as an image of purity and righteousness that embodies the cause to which Robin has dedicated himself, similar to the depiction of Our Lady making herself manifest to King Alfred in Chesterton’s “The Ballad of the White Horse.”

Interestingly, there is even a children’s nursery rhyme that depicts Robin praying the rosary in the greenwood while Little John is out on a mission to town:

Is in the mickle wood!

He to town is gone.

All in the greenwood

Among the green weeds.

If he comes no more,

We shall fret full soar!

During the heat of the Protestant Revolt in England, many symbols of high-Church practice and cultural memory came under fire. It is speculated that this is the reason the supposed graves of King Arthur and Guinevere were dug up at Glastonbury, just as many resting places of the saints were disturbed. Not surprisingly, some records show that recusant Catholics were branded by the derogatory term “Robin Hoods” to designate them as being faithful to the old religion and outside the law.

Although the old legends endured, modifications were gradually introduced that better suited changing times. In place of the prominent role played by the Virgin Mary in Robin’s life, Maid Marian became his lady love to whom he plighted his troth. Like Friar Tuck, her development took on many forms in different variations. However, judging by her name and her own eventual status as a pure symbol of devotion, one wonders if, similar to the naming of the state of Maryland, the character carried over some of the original Marian elements.

Robin Hood, in his current form, continues to symbolize the fighting spirit of a small island in the entirety of his legacy. He fought with his longbow, the symbol of British pride and resistance, and prayed with his Rosary Beads, the symbol of the faith of the people and the refusal to let it die. Indeed, it was the sacrifice of the Catholic “Robin Hood” Recusants that kept the spark of Catholicism from being completely smothered by the turbulent winds of the times. To this day, there are Catholic men and women from the Northern England who can trace back their lineage back in an unbroken line of faithful Catholics. It is their story that best exemplifies the true spirit of Robin Hood.