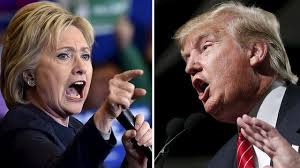 It will all be over later today, one way or the other, after a bizarre and unenviable election process:  The United States of America, still the greatest economic and military force on the planet, at least for now, will have, to all intents and purposes, a new leader, either Mr. Trump or Ms. Clinton, neither of whom seems ready nor worthy of the office.  The difference is that Clinton is vehemently pro-‘choice’, while Trump, whatever his other foibles, along with his running mate Pence, have declared themselves pro-life. We sometimes have to choose the lesser of two evils, and politics is the art of the practical and possible, not the ideal.

Someone mentioned to me today that Abraham Lincoln was a third-party candidate, so one never really knows what will happen, but, if my brief and rather superficial knowledge of United States history tells me anything, things were different in the spring of 1861. But I sort of agree with the late Joseph Sobran, that no one can really govern the current United States, with such immense power over 300 million-plus, concentrated in a few acres in Washington, D.C..  As I concluded a recent post, the whole Augean stables and the privileged class of our benighted rulers needs a thorough catharsis.

Will the fall of 2016 be the beginning of the fall of the Republic?  I, and many others, wonder. Rome did not fall all at once on that fateful September day in 476 when the German ‘barbarian’ Odovacar, who was a soldier of the Roman army and spoke fluent Latin and so was not really a ‘barbarian’, deposed little Romulus Augustulus, the last Roman emperor, properly speaking.  There are those who say Rome never ‘fell’ at all, pace Gibbon, but simply transformed, as things are always transforming, sometimes more significantly than others.

So I suppose we are in for just such a transformation, which may or may not be the end of the U.S., at least as we know, or have known, it, and I wonder if there is our very own Odovacar waiting in the wings…

I was teaching the document on the priesthood from Vatican II the other day, and was pleased to be reminded that the  natural requirements listed for candidates for the priesthood, an authoritative role if ere there was one (or should be), overlapped quite nicely with the ones I listed in my recent post on the requirements for leadership:  As the decree, Presbyterorum Ordinis, states, praising “certain virtues” which “contribute a great deal” to the perfection of the priesthood:

such as goodness of heart, sincerity, strength and constancy of mind, zealous pursuit of justice, affability, and others

But, alas, the Thomas Mores of this world are few and far between.  We live with the rulers we have, and whom God in His mysterious providence, sends, either as a reward or a punishment or, like many things, a bit of both.

Here’s hoping that whoever is elected will steer the United States away from its Obama-esque descent into crony socialism, or what the great Pope Saint John Paul II termed ‘state capitalism’, with the worst of both.  If one would like to read the dire effects of over-governmental interference in the economy, however well-intended, peruse this grim article on Venezuela, which has by any number of measures the worst economy in the entire world.  This was all predicted by the prescient Maggie Thatcher, who once declared with droll British humour that the problem with socialism is that you eventually run out of other people’s money.

People will sometimes ask me, to whom does a country owe its debt?  That is a complex question, and Deacon Chabot has his own take on that.  But you may read in said article that the current Presidente of Venezuela, Nicolas Maduro, who succeeded the tragic-comical-pathetic Hugo Chavez (Maduro claims to hear Chavez’ voice guiding him from the afterlife), now has to decide whether to pay his Chinese creditors (who prefer payments in oil, rather than the near-worthless Bolivar), or to feed the once-prosperous country’s schoolchildren.

But if you want a rather Catholic take on the reality behind the quasi-‘socialist’ hero Robin Hood, who would ‘rob from the rich and give to the poor’, check out Ms. Balestri’s article on the English crusader and his band of merry men.

Mary, conceived without sin, pray for us who have recourse to thee.

Our Lady of the Immaculate Conception, patron of the United States, ora pro nobis!