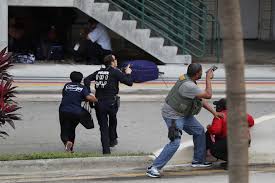 Another day, another shooting, this time on American soil, at Fort Lauderdale International Airport. Details are still forthcoming, but the alleged perpetrator is a U.S. Army veteran of the Iraq war, who claimed the government was controlling his mind, a victim of the ubiquitous and catch-all  diagnosis of ‘PTSD’. He was permitted to check a firearm, which he used to gun down a number of people in the baggage claims, apparently at random in cold blood, after which he dropped his weapon and lay down, waiting for arrest.  Five are dead, a number of others injured.

Here in Canada, in the town of Upper Big Tracadie in Eastern Nova Scotia, an ex-soldier apparently shot to death his wife, his ten year old daughter, his mother, and then himself, for reasons that remain obscure, but also involve PTSD and his ongoing mental problems after his own tour of duty in Iraq.  He apparently had received some sort of head injury when falling on a vehicle.

Both of these tragic incidents raise the perennial question of personal culpability, especially for those suffering from mental illness. There are two extremes that should be avoided:  We should recognize the reality of psychological fracturing of the mind, with all its consequences, including the lessening of one’s voluntariness.  But we also must avoid the reduction of the human person to a ‘machine’, which suffers a ‘malfunction’, to be fixed by some external source, whether a drug, therapy, or some expert and the new methods du jour.

The questions: How ‘aware’ is the person of what they are doing?  How in control are they of their actions? Could they have said ‘no’ to the impulses and desires welling up within their minds and psyches? Did they seek any spiritual as well as psychological and societal help? What sort of lives were they living, and did they engage in behaviours that exacerbated their condition?

Vague and general diagnoses of ‘PTSD’ do not provide all the answers to these questions and others. We all go through stressful events, and, throughout history, recent and ancient, men have gone through what we might without much exaggeration call ‘hell’:  Those who stormed Normandy and climbed over Vimy Ridge to face a hail of German machine gun fire certain went through a ‘stressful situation’, and I wonder if there were the same incidents in the years after the wars, or were they unreported, or were there other kinds of disorders?

My point is not to determine guilt or not, which is ultimately the prerogative of God, but we should also be careful not to use psychiatry and its implied materialistic view of the human person to obviate any notion of personal responsibility for our actions, not least for those who carry out such objectively heinous acts. In whatever milieu in which we find ourselves, internal or external, we have a duty to form our conscience, guide our actions, seek proper help and support, which should include prayer and the sacraments and living a reflective moral life, so that we can do our best in each situation. (This applies also to the brouhaha over  the semi-fictional dilemma in the novel Silence, with the new film now released). We are not machines, but persons, body and soul, made in the very image of God, who will have to provide an answer for every moral decision we make, within the limits of the freedom we are given.